Kazakhstan’s President Tokayev Calls for Referendum on Amendments to Constitution

NUR-SULTAN – President Kassym-Jomart Tokayev has made major announcements today at an annual session of the Assembly of the People of Kazakhstan, including an initiative to hold a national referendum to vote on his proposed amendments to Kazakhstan’s Constitution. 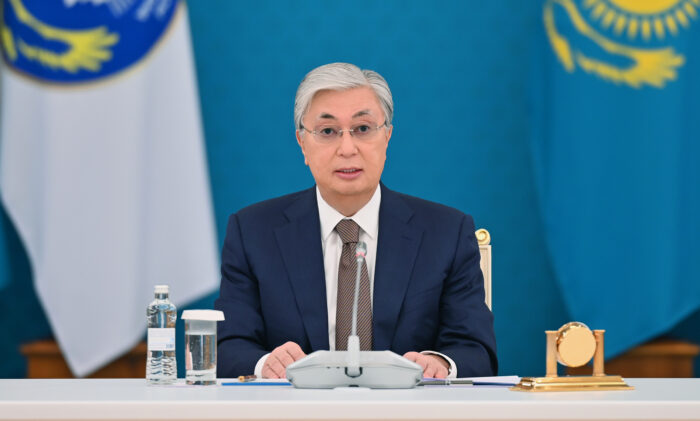 The date has not been announced yet, but according to Kazakhstan’s laws, the referendums may take place in a period between one and three months following its formal approval by the President.

Earlier this week, Tokayev’s office sent a draft law to the Constitutional Court’s consideration, which contains specific proposals concerning thirty-three articles to be amended, more than a third in the country’s basic law.

Some major amendments include limiting presidential powers, giving more power to the Parliament and making it more representative of the country’s 19 million population through replacement of the proportional system of elections to a mixed majoritarian-proportional one, as well as significant decentralization of power with more competences given to regional and local authorities, consolidation of human rights protection mechanisms, including the Ombudsperson’s office, establishment of the Constitutional Court, to which citizens  could make appeals, etc.

“I have initiated amendments to the Constitution, which are fundamental in nature and significantly alter the country’s political system. We are transitioning to a new state model, a new format of interaction between the state and society. This qualitative transition can be called the Second Republic,” said Tokayev addressing the assembly’s meeting.

Kazakhstan held its last referendum in 1995 when they adopted the current Constitution. Since then four packages of amendments have been introduced to the Constitution. However, all of them were made through holding a vote in the Parliament. This option is still available and most observers expected President Tokayev to employ it to exclude any serious challenge for his initiatives in the legislature dominated by the Amanat party which supports him.

“I believe that amending the Constitution through a popular vote will be a vivid demonstration of the will of the people,” he said. “The referendum will enable each citizen to directly participate in deciding the destiny of the country and will strengthen our course towards all-round democratization and building of the New Kazakhstan.”.

Tokayev also announced the convocation of the Ulltyk Kuryltai (National Congress) within a month, a new institution that the President proposed to establish in his latest state-of-the-nation address in order to to encourage further wide public discussions involving government officials and a wide range of representatives from civil society.

The session of the assembly is taking place today under the title The Unity of the People is the Basis of a Renewed Kazakhstan.

According to Tokayev, the New Kazakhstan platform also entails reformatting the system of individual and public values, where the nation will stand strong against nepotism, paternalism, and corruption.

“It is also unacceptable that high values of patriotism are replaced by base feelings of ethnic superiority, and mutual hostility and hate speech are promoted instead of friendship and unity,” he said, referring to the importance of Kazakhstan’s unity in diversity principle.

The main goal of the session is to determine what role the Assembly will play in the ongoing political transformation. Over the 30 years, the assembly gave voice to more than 130 ethnic communities who call Kazakhstan home and these voices became increasingly important in the new political realities that the country faces now.

Tokayev described the assembly’s role as a “solid institutional pillar of policy of peace and harmony.” These are guiding values for Kazakhstan.

“We felt the importance of these values clearly during the January events. These dangerous days are now behind us. Eventually, we will come to understand the dangers we face. In fact, we were almost close to losing our nationhood,” said Tokayev emphasizing that the nation must learn the lessons of the January Unrest.

Commenting in his Telegram channel on the President’s statement, Kazakhstan’s Secretary of State Erlan Karin noted that “for the first time, the constitutional reform will be implemented by direct popular vote, which will emphasize its truly nationwide, popular character.” He believes that the upcoming reform would “optimize the balance of relations between the branches of power” and open a way for expanding the participation of citizens in governing the country. “This is a systemic transformation of the state model. Therefore, a referendum is necessary for a final departure from the old model and a restart of the political system,” Karin concluded.

The Constitutional Council has a few more days for issuing its conclusion on the draft law introduced for its consideration by the President’s office before he issues a decree announcing the date for the referendum and formulas of a question or questions voters would be asked.