NUR-SULTAN – Last week a number of political events took place that paved the way for the implementation of major political reforms that were proposed by President Kassym-Jomart Tokayev during his address to the nation on March 16. The week started off with President Tokayev’s announcement of his decision to resign early from the position of the Chairman of the ruling Amanat party on April 26. Followed by a proposal to hold a national referendum on the amendments to Kazakhstan’s Constitution at an annual session of the Assembly of the People of Kazakhstan on April 29. 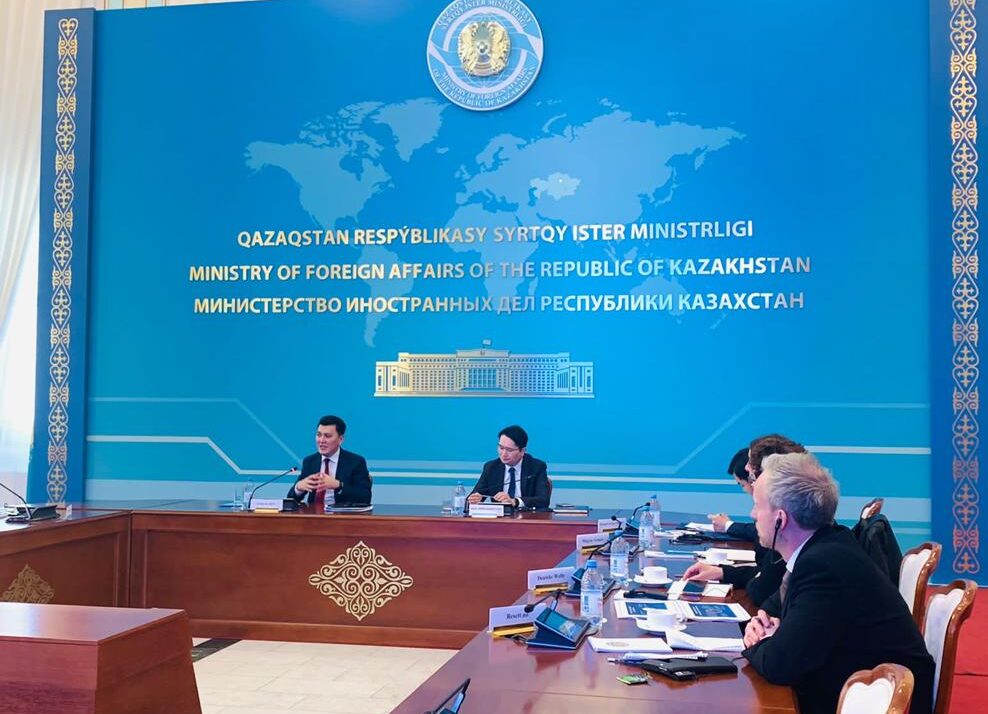 Erlan Karin (L) during the meeting with foreign and local journalists.

Erlan Karin, Kazakh State Secretary and one of the top political experts in Kazakhstan, spoke about the importance and the scale of the upcoming political reforms and corresponding amendments in the Constitution during a meeting with a group of foreign and local journalists on April 28.

President Kassym-Jomart Tokayev demonstrated his firm intention to enact decisive changes in the political model of the country, said Karin, referring to Tokayev’s decision to resign from the chairmanship of the ruling party Amanat earlier this week.

“The President has already begun to take specific steps ahead of the changes in the Constitution,” said Karin. “I see it as a first move to demonstrate the firmness of his intentions to promote his reforms, without waiting for the constitutional changes. This is a sensational statement for Kazakhstan,” said Karin.

During the meeting Karin also stressed that political reforms proposed by President Tokayev in his address to the nation were developed considering the existing needs of Kazakh society and have been a logical progression of the President’s previous reforms, rather than purely a response to the tragic events of January.

Reforms were proposed based on a wide and constructive dialogue with the public and experts. According to Karin, adopting other countries’ constitutional models was not on the agenda, but rather they focused on making decisions that would facilitate the transition of the political system.

“Indeed, some of the initiatives were prompted by an analysis of the causes and consequences of the January events,” he said, adding that “we prepared these changes and reforms based on the internal needs of our people, taking into account the problems and challenges facing our society,” stressed Karin.

Active bilateral discussions involving public figures, experts, social and human rights activists, lawyers, and representatives of various political parties, and NGOs were held for several months prior to the President’s address to the nation.

Karin also stressed that the reforms proposed during the address to the nation were a logical progression of the previous four political reform packages initiated by the President in 2019-2021, years during which 10 laws were adopted solely regarding Tokayev’s political reforms.

One of the newly adopted laws was the law on conducting political rallies. As the result of the adoption of the new procedures for organizing and conducting peaceful assemblies in Kazakhstan, the number of rallies increased from 2-3 per year to 500 per year, which according to Karin, was a very big transformative step in a region with no prior experience in conducting such political events.

Speaking about the time-period necessary for successful implementation of the reforms, Karin said that changes in the Constitution will be effective in the next two to three months. The next step will be to change the legislation acts and bills in accordance with the “new” constitution, which requires more time.

Overall, Karin said the President’s proposal is that the adoption of new laws would be completed by the end of this year. Thirty-three out of 98 articles of the Constitution may change as a result of the proposed reforms.