NUR-SULTAN – The international day of human space flight celebrated on April 12 will be held under the auspices of the Year of Children in Kazakhstan, reported Kazinform. 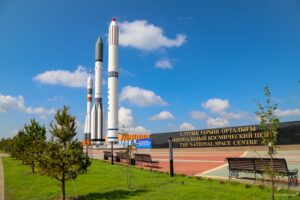 The international day of human space flight is widely celebrated in the country since the history of space exploration has begun in Kazakhstan. Soviet cosmonaut Yuri Gagarin became the first man in space by orbiting the Earth for approximately 108 minutes on a Vostok-1 spacecraft that launched from Kazakhstan’s Baikonur Cosmodrome on April 12, 1961.

“This will be a whole series of events aimed at popularizing and developing the space industry, increasing the interest of young people and the public in space development issues,” said Gulzhan Smailova, Head of the Office of Scientific and Technical Developments of the Aerospace Committee Kazkosmos of the Ministry of Digital Development, Innovations and Aerospace Industry.

The major event will be held on April 12 at the National Space Center, where the young people will meet with Kazakh cosmonauts, the leadership of Kazkosmos. More than 120 students from schools and universities, startup founders and early-career scientists will take part in the meeting.

The live broadcast of the event will be available at 15.00 p.m. local time (GMT+6) on the Kazkosmos YouTube channel.

The Youth Council at Kazkosmos and Jas Garysh Association (Young Cosmonauts) in the Zeren National Educational Youth Camp will be created to unite active and talented young people.

It is planned to open rocket science and robotics clubs in the capital to foster children’s interest and engage them in innovative activities.

In his New Year’s address to the nation, President Tokayev declared 2022 as the Year of Children. He noted that their well–being is a reliable guarantee of the successful future of the country.