NUR-SULTAN – It has been 60 years since the first human entered space. Hardly anyone could accomplish such a task at the age of 27, but Yuriy Gagarin did, making history by orbiting the Earth for approximately 108 minutes on a Vostok-1 spacecraft that launched from Kazakhstan’s Baikonur Cosmodrome on April 12, 1961. 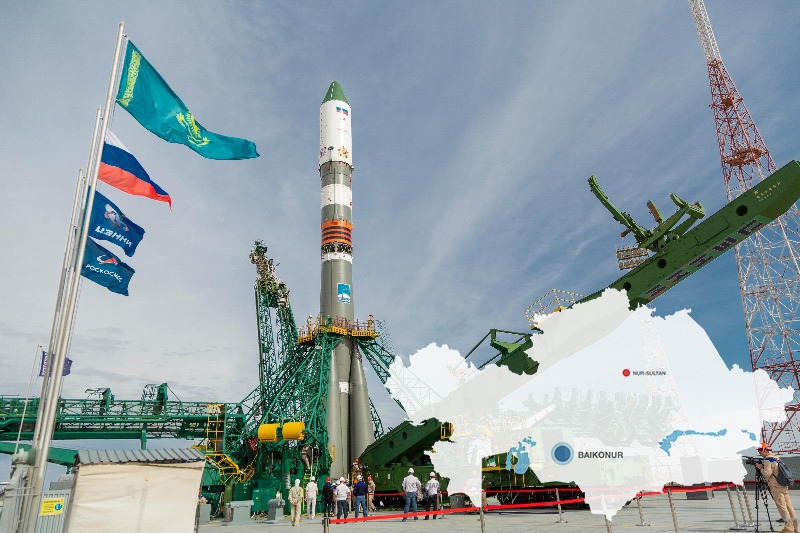 The launch of the Soyuz 2.1a space launch vehicle with the Soyuz MS-16 crewed spacecraft on April 9, 2020. Click to see the map in full size.

Yuriy Gagarin, the first man in space, was born near Moscow in 1934. He joined the Soviet Air Force in 1955 and four years later he was trained as a cosmonaut.

In 1960, Gagarin was selected along with 19 other candidates for the Vostok 1 programme. The training included extensive physical exercise and parachute training. The final decision was in Gagarin’s favour and according to historical records, he was also favored by his peers. 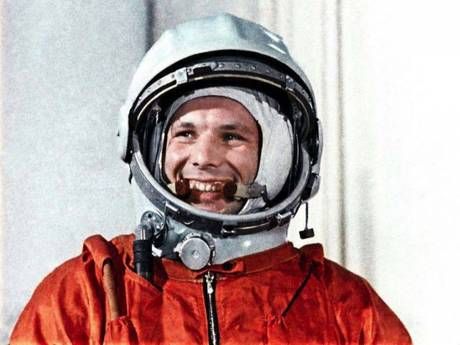 Numerous tests, including physical and psychological endurance, preceded the flight.

On April 12, at 9.07 am Moscow time, the spacecraft launched from Baikonur. “Let’s go!” said Gagarin and in ten minutes, his spacecraft separated from the launch rocket.

He orbited earth for 108 minutes reaching a maximum height of 327 kilometers before reentering the Earth’s atmosphere. The Vostok spacecraft, however, had no engines to ensure a slow re-entry, but Gagarin successfully landed by parachuting.

Returning to the Earth, he was no longer an ordinary citizen, but an international celebrity.

Vostok 1 was Gagarin’s only spaceflight. Fearing for Gagarin’s life after his friend and fellow cosmonaut Vladimir Komarov’s fatal crash in a Soyuz 1 mission, Soviet officials banned Gagarin from further spaceflights. 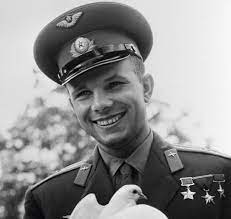 It was not until February 1968, when he was allowed to fly regular aircraft after completing training at the Zhukovsky Air Force Engineering Academy that he took to the skies again. But five weeks later, Gagarin tragically died in a military training flight exercise at 34 years of age.

Celebrations commemorating the major milestone kicked off in the town of Baikonur in southern Kazakhstan, where the cosmodrome is located, from April 9, which included cultural and sporting events.

Children had a chance to visit the cosmodrome on April 9tth and witness the launch of the Soyuz MS-18 spacecraft to the International Space Station. 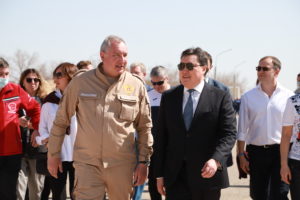 Rogozin and Mamin in the town of Baikonur. Photo credit: roscosmos.ru

During the meeting, Mamin conveyed the congratulations from President Kassym-Jomart Tokayev.

“Sixty years ago, the history of mankind witnessed an event of enduring importance – a bold exploration of an outer space began. The first flight by Soviet cosmonaut Yuri Alexeyevich Gagarin became a bright symbol of unprecedented progress in world science. This historic step was taken here in Kazakhstan,” said Tokayev.

He honoured the continuous efforts of scientists, engineers and test engineers.

The city also plans an exhibition titled “108 Minutes that Changed the World,” a track and field race and concerts.

Translated as “rich valley” from Kazakh, the Baikonur cosmodrome is a focal point of world cosmonautics, as it was the site of two historic events in the global space industry with the launch of the first artificial Earth satellite and then Gagarin’s flight. All major Kazakh and Russian and many international space projects are being implemented at Baikonur.

The Vostok, Voskhod, Soyuz manned spacecrafts, the Salyut and Mir orbital stations, and the Energy-Buran reusable system as well as interplanetary spacecraft and artificial Earth satellites – all of them were launched from Baikonur. According to estimates, more than 50 percent of all world space launches were carried out of Baikonur.

– Baikonur has unique location features due to its relative proximity to the equator and location in a sparsely populated area. The linear speed of the Earth’s rotation at the latitude of Baikonur is 316 meters per second, which is considered a favorable condition for launching into orbit.

– The cosmodrome was founded by the Soviet Union authorities in 1955. It was used to test intercontinental ballistic missiles (ICBMs) until 1957.

– Soviet cosmonaut Yuri Gagarin became the first man in space when the first manned spaceflight took place from Baikonur in 1961.

– Soviet cosmonaut Valentina Tereshkova became the first female in space with the Vostok 6 mission launched from Baikonur in 1963.

– Soviet cosmonaut Alexei Leonov became the first person to conduct a spacewalk in history in 1965 as part of the Voskhod-2 spacecraft launch, which took off from Baikonur.

– In 1991, Toktar Aubakirov was the first Kazakh cosmonaut who joined the crew at the Soyuz TM-13 spacecraft, which flew from Baikonur.

– American astronaut Daniel Burbank joined the Russian spacecraft to the ISS launched from Baikonur in 2011.

– According to the Roscosmos company, more than 10,000 people currently work at the Baikonur space facility.