By Zhanna Shayakhmetova in Nation on 22 April 2022

NUR-SULTAN – Kazakh Minister of Justice Kanat Mussin spoke about the amendments to be introduced to the Constitution as part of the New Kazakhstan: The Path of Renewal and Modernization program following the President’s address during an April 18 press conference at the Central Communications Center. 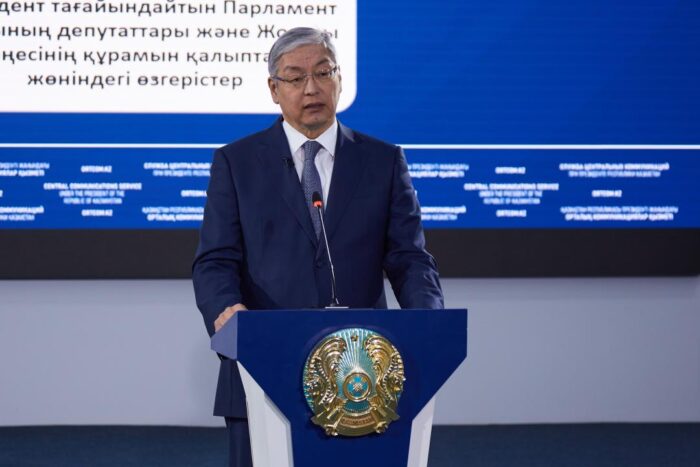 In his state of the nation address, President Kassym-Jomart Tokayev outlined major political initiatives and programs to contribute to a consistent democratization, and ensure the stability of the country.

The implementation of the initiatives will require approximately 30 amendments to the Constitution and the adoption of more than 20 laws before the end of the year.

“The main directions of political reforms include limiting the powers of the President, including termination of his or her membership in a political party for the period of their term in office. Earlier, the President announced plans to leave his post of Chair of the Amanat party at its congress,” said Mussin.

Mussin explained that the term Second Republic means a structural change in the country and a transition to a new political model. “This means a transition from a super-presidential form of government to a presidential form with a strong parliament. Our future will be built on new social values,” he added.

Terminating membership is also related to the chairs and members of the Central Election Commission, the Accounts Committee and the Constitutional Council, governors and their deputies. This will contribute to the effective work of the apparatus, increase political competition and create equal conditions for all parties.

The legislation on combating corruption also provides restrictions for in-laws, who are close relatives of the spouses.

The Majilis, the lower house of the Parliament, will transition to a mixed proportional-majoritarian model, where 70 percent of deputies will be elected by a proportional model, and 30 percent by a majoritarian rule.

There are also amendments related to the termination of the President’s right to suspend or cancel the acts of akims (governors) of districts and cities of republican significance, as well as the right to dismiss district and rural governors. This reform will contribute to the strengthening of local representative and executive bodies, said Mussin.

The relevant draft laws will be introduced to the Parliament in August, and its adoption is scheduled by the end of this year.

On March 29, the President approved the national action plan to implement the state of the nation address with added deadlines for its implementation.