NUR-SULTAN – Kazakhstan cannot afford to delay further economic reforms and should think of different approaches to its economic development as the full realization of the impact of Western sanctions on Russia is yet to come, said Sir Suma Chakrabarti, Adviser to the President of Kazakhstan on economic development and effective governance, in an exclusive interview for this story. 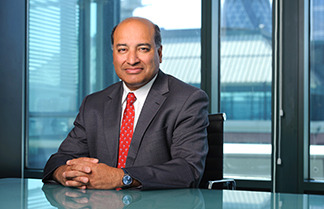 “The situation between Russia and Ukraine is clearly unprecedented. It causes major disruptions,” said Sir Suma, who served as president of the London-based European Bank for Reconstruction and Development (EBRD) in 2012-2020.

“Western countries already imposed sanctions on Russia and the economic links between Kazakhstan and Russia are so integrated that it is going to hit Kazakhstan and other countries in Central Asia and the Eurasian Economic Union,” explained Sir Suma, who now also serves as Deputy Chair of the Supreme Council on Reforms and Deputy Chair of the Management Council of the Astana International Financial Center (AIFC). Kazakh President Kassym-Jomart Tokayev chairs both institutions.

What the government needs to do now is to think of new approaches to adapt to what Sir Suma described as a “new normal” referring to the potentially devastating impact of Western sanctions on Russia that have already caused the Russian rouble to plunge to its record low and the Kazakh tenge to feel the strain as well.

“I reemphasize the need to speed up economic reforms. Because we can’t delay now. The situation will get quite difficult. We do not want the public to suffer, but it will be difficult for some period. And we need to recognize that and be open about it,” he said, with “we” meaning Kazakhstan. “And remember that this was not caused by the government of Kazakhstan.”

He commended the government’s efforts to mitigate the crisis which was the key focus of the March 3 meeting of the Supreme Council for Reforms. The meeting focused on several items – anti-crisis measures, taxes on specific industries, and the ongoing transformation and privatization in the Samruk Kazyna Sovereign Wealth Fund that manages nearly US$69 billion in state-owned assets in key sectors of the country’s economy.

“The government and the central bank explained the anti-crisis package, what measures are taken because of sanctions. Underneath that item, the most important thing was realization and recognition that business as usual cannot continue. We are so linked with the Russian economy. As the saying goes, when Russia sneezes, we catch a cold, because of this linkage. The Russian economy is in serious difficulty and that will affect us too,” he explained.

On March 2, the Kazakh government set up an anti-crisis task force that will be in charge of carrying out anti-crisis measures and will meet daily.

Since independence in 1991, Kazakhstan has attracted more than US$376 billion in foreign direct investments capitalizing on its political stability, strategic location, a wealth of mineral resources, and relatively favorable business conditions, including the visa-free regime for more than 70 nations.

“We must now do different things to attract investors to the country. We have a good track record, but the new normal means we have to look at ourselves. Our geographic location has always been a positive factor, but now it’s quite a challenge. We have to think about new routes, trade, and finance routes,” Sir Suma said.

The Astana International Financial Center, established in 2018 to introduce international standards of financial services, can be a game-changer, saying that “the one issue that kept coming up through all these items is the importance of the AIFC.” As reported by AIFC Governor Kairat Kelimbetov on March 5, around 1,200 companies have been registered within the AIFC ecosystem so far, with Russian companies making up only around 5 percent of that number.

The push for reforms has accelerated after the tragic events in Kazakhstan last January, but all the issues raised have been on the table long before that, which include providing for fairer competition, greater economic diversification, reforms in the state apparatus and quasi-public sector, and accelerated privatization.

For Kazakhstan, the January events were a trigger for reforms, not a step back, Sir Suma noted.

“In many of the crises, many leaders go backward against reforms, because they think reforms will create more challenges, but President Tokayev decided that what the people were asking for was the acceleration of political and economic reforms. He has done the right thing and I very much strongly back that because I think it is in line with the demands of the citizens of Kazakhstan,” said Sir Suma expressing his high hopes for the upcoming state-of-the-nation address scheduled for March 16. As announced by officials, President Tokayev is set to announce a wide-ranging program of political and other reforms in the address that was pulled up by six months reflecting the importance of introducing reforms sooner.

It is time to move from nice words and documents to real implementation, Sir Suma noted, emphasizing the need for better execution. And the dialogue between the state and citizens in communicating these reforms clearly is essential.

“In designing these reforms, we need the state to talk more closely to the citizens. That’s another lesson from January. The President had stressed before the importance of the listening state. The state really has to start listening and engaging with citizens directly,” he said.