Book About Baitursynov Presented in Prague in Czech and English Languages

NUR-SULTAN – The meeting dedicated to the 150th anniversary of Kazakh linguistics scholar, educator, public and political figure Akhmet Baitursynov was held in Prague on March 24, reported the press service of the Kazakh Ministry of Foreign Affairs. 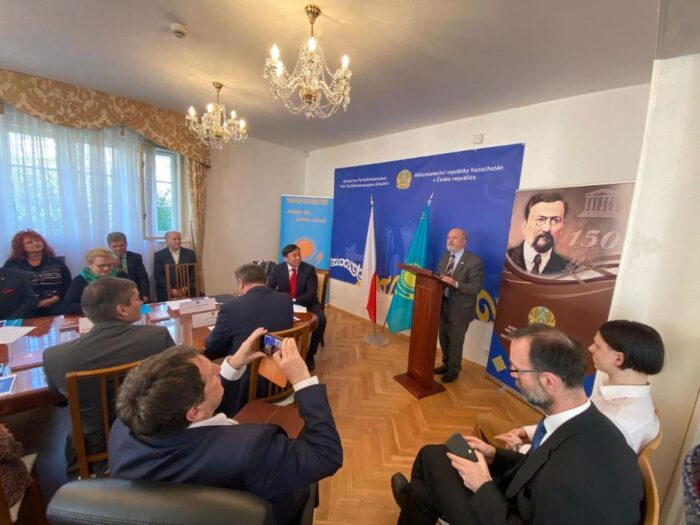 The book titled “Akhmet Baitursynov and Alash” was also presented as part of the event. The book was translated into the Czech and English languages and includes the work of researchers who studied the Alash political movement of the Kazakg national intelligentsia in the early 20th century.

The formation of Kazakh statehood and discussion about the country’s major achievements were on the agenda of the event.

Czech scholar Jiří Shima said that the study of a nation’s history helps to grow appreciation of the importance of independence.

The Embassy of Kazakhstan in the Czech Republic presented the books as gifts to Charles University in Prague.

This year, Kazakhstan has been celebrating Baitursynov’s 150th anniversary which was included in the list of anniversaries with which UNESCO is associated in 2022-2023.

Baitursynov, Alikhan Bokeikhan and Mirzhakyp Dulatuly decided to establish the Autonomy of Kazakh areas and to name it Alash (in honour of the Kazakh people’s legendary ancestor), following the October revolution in 1917. The first political group and movement – the Alash party and the Alashorda government was created. The centerpiece of the Alashorda was creating a single autonomous state within the democratic federative Russian republic, which would allow for autonomous decisions in the interest of the local population. Baitursynov became a key spiritual leader of the intelligentsia behind this effort.