By Saniya Bulatkulova in Kazakhstan Region Profiles: A Deep Dive Into the Heart of Central Asia, Society on 16 February 2022 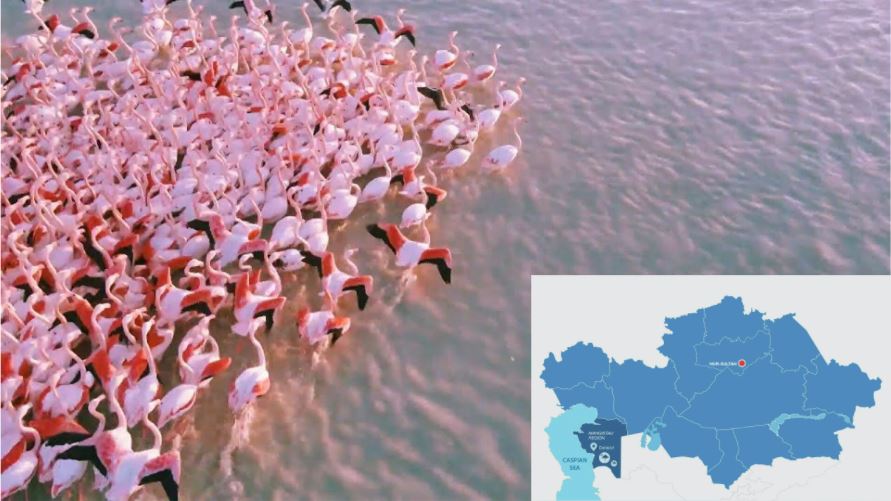 Among three existing species across the globe, pink flamingos live only in Kazakhstan – in the Akmola and Aktobe regions. Photo credit: uz.sputniknews.ru. Click to see the map in full size.

The birds, which usually come back in early April, were caught on camera on the southern outskirts of Aktau in mid-February.

According to local ecologists, their schedule changed due to severe warming and the early arrival of meteorological spring in the region.

“For the third year in a row, flamingos are flying back earlier than usual. There are approximately 50 to 80 individuals. I think the others will come soon enough, because there were 1,000 birds last year. They have been captured to come back in mid-February lately. It is certainly due to global climate change. We can say that early spring has come,” said local ecologist Kiril Osin in an interview to Khabar TV.

Aktau city residents often capture amazing birds on video that go viral as among the three existing species, pink flamingos can only be found  in Kazakhstan.

Pink flamingos have been choosing Lake Karakol since 1970 because of the abundance of tiny crustaceans and shrimps. Being one of the rarest migratory water birds, they are included in the Red Book of Kazakhstan of endangered species.