NUR-SULTAN – The state of emergency has been abolished in the West Kazakhstan, North Kazakhstan, and Pavlodar regions starting from Jan. 13 thanks to a decree signed by President Kassym-Jomart Tokayev on Jan. 12, reports the Akorda press service. 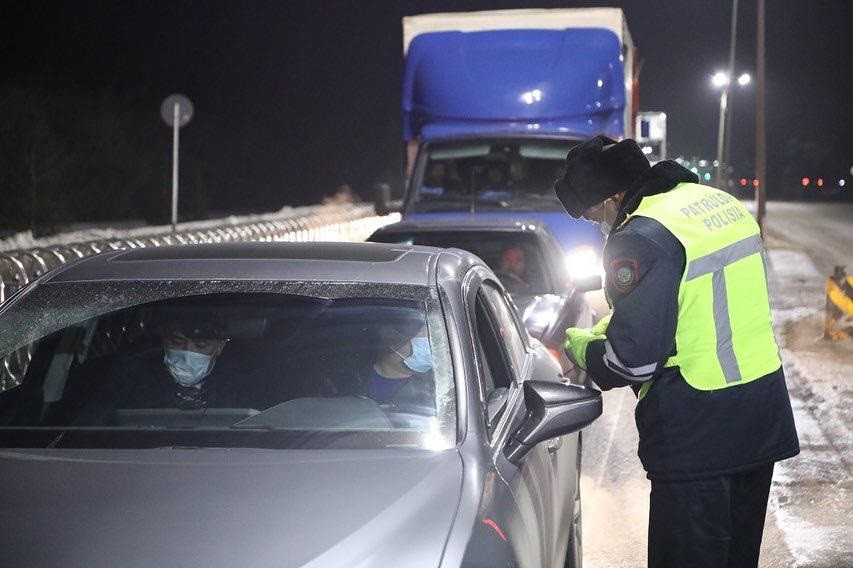 A police officer checks the documents of people entering the city through a checkpoint. Photo credit: astana.gov.kz

Abolishment of the state of emergency means that the curfew and restrictions on movement from and to regions are no longer in place.

The state of emergency was introduced on Jan. 5 throughout the territory of Kazakhstan after mass unrest broke out in the country, the biggest in the history of Kazakhstan. It will last through Jan. 19, including a curfew between 11 p.m. and 7 a.m., and a ban on mass gatherings.

Meanwhile, the situation has largely stabilized. The country’s National Security Committee said in a statement on Thursday that the critical level of the terrorism threat has been lifted in 14 regions of Kazakhstan. In Almaty, the Almaty and Zhambyl regions, however, the committee continues its work to identify and detain “terrorists and individuals involved in other criminal activities during the mass unrest.”

The Collective Security Treaty Organization (CSTO) peacekeeping contingents that arrived in Kazakhstan based on President’s Tokayev official request on Jan. 5, the first time the CSTO peacekeeping provision has ever been exercised, began to withdraw their troops today. The mission of the CSTO, which consists of  Armenia, Belarus, Kazakhstan, Kyrgyzstan, Russia, and Tajikistan, numbered 2,030 troops and 250 pieces of military hardware and were tasked with “protecting important state and military facilities, assisting the law enforcement forces of Kazakhstan in stabilizing the situation and returning it to the legal field.”

“The very presence of a CSTO peacekeeping contingent in Kazakhstan, including in Almaty, has played a very important role in terms of stabilizing the situation in our country. Undoubtedly, it had a great psychological significance in repelling the aggression of the terrorists and bandits. The mission is assessed as a success,” said President Tokayev.

Visiting Almaty on Jan. 12, the country’s largest city and important business and financial districts suffered the most from the violence, he checked the aftermath of the unrest and met with senior government and city officials.

All heating, electricity, water, and gas supply facilities operate in a normal mode now, while trade facilities, markets, gas stations, and industrial enterprises as well as public transport, except for the metro, have resumed their work.

The airport, which suspended its work after the terrorist attack, resumed its operations on Jan. 13 but will work limited hours from 8 a.m. until 9 p.m.

The President told the government commission and the Almaty city administration to restore infrastructure facilities, including buildings of government agencies, law enforcement and special structures, and video surveillance systems as soon as possible. Support will also be provided to businesses whose buildings were damaged during the riots and from looting.

A total of 1,300 businesses have been destroyed, and more than 100 trade centers and banks have been looted, according to Erzhan Kazykhan, Special Representative of President of Kazakhstan for International Cooperation.

“More than 500 police vehicles have been burned, and 5,000 have been apprehended. The economic damage amounts to an estimated $2.5 – $3 billion,” he said in his official statement.

At least 17 security officers were killed, while the overall number of casualties, has not yet been disclosed by the government.