By Staff Report in International on 7 December 2021

NUR-SULTAN – The Kazakh Ministry of Foreign Affairs released a statement lauding the results of the P5 Conference of the Treaty on the Non-Proliferation of Nuclear Weapons, reported the ministry’s press service. 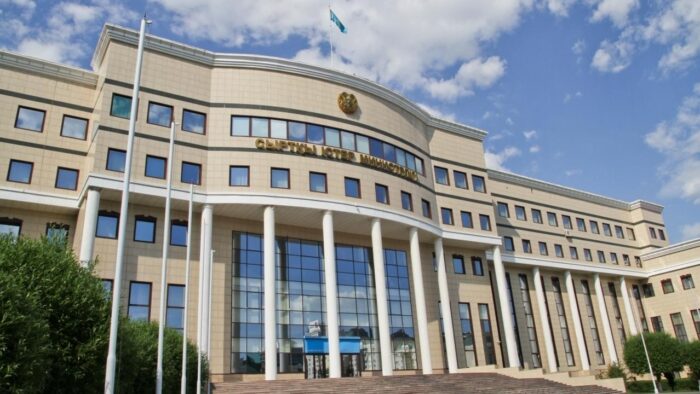 The building of the Ministry of Foreign Affairs in the Kazakh capital.

The representatives from the five Nuclear Non-Proliferation Treaty (NPT) Nuclear Weapon States (NWS) also referred to as P5 including the United States, Russia, the United Kingdom, France, and China met on Dec. 2-3 in Paris to discuss the agenda of the 10th NPT Review Conference. The NPT conference will take place at the United Nations headquarters on Jan. 4 – 28, 2022 in New York.

As a result of the conference, the states declared their commitment to nuclear-weapon-free zones and support for “a world without nuclear weapons with undiminished security for all,” according to the joint communiqué.

Kazakhstan praised the efforts to reduce the risk of nuclear conflicts. This includes the exchange of information by the parties on updates in their nuclear doctrines and nuclear policy and a discussion by nuclear-weapon states of the importance of the entry into force of the Comprehensive Nuclear-Test-Ban Treaty (CTBT) and reaffirmation of the conference participants’ ultimate goal to achieve a nuclear-weapon-free world with undiminished security for all.

“Kazakhstan as a staunch supporter of nuclear disarmament and strengthening the global nuclear non-proliferation regime, advocates the universalization of the NPT and strict observance of its provisions by all participating states, adheres to the need to ensure an open, inclusive and transparent dialogue to make the Review Conference a success,” reads the document.

Kazakhstan also reaffirmed its commitment to the goal of establishing nuclear-weapon-free zones and called on the global community to support the provisions of the Universal Declaration on the Achievement of a Nuclear-Weapon-Free World.

Initiated by Kazakhstan, the declaration was approved by the UN General Assembly and co-sponsored by 35 countries in 2015. The document calls for the total elimination of nuclear weapons as the only absolute guarantee against their use or threat of use.