NUR-SULTAN – Kazakh Prime Minister Askar Mamin has proposed to set up a European Union – Central Asia Business Council during the first European Union – Central Asia Economic Forum in Bishkek on Nov. 5, reports his press service. The council is expected to bring together representatives of governments and financial institutions, as well as businesses to facilitate trade and investment. 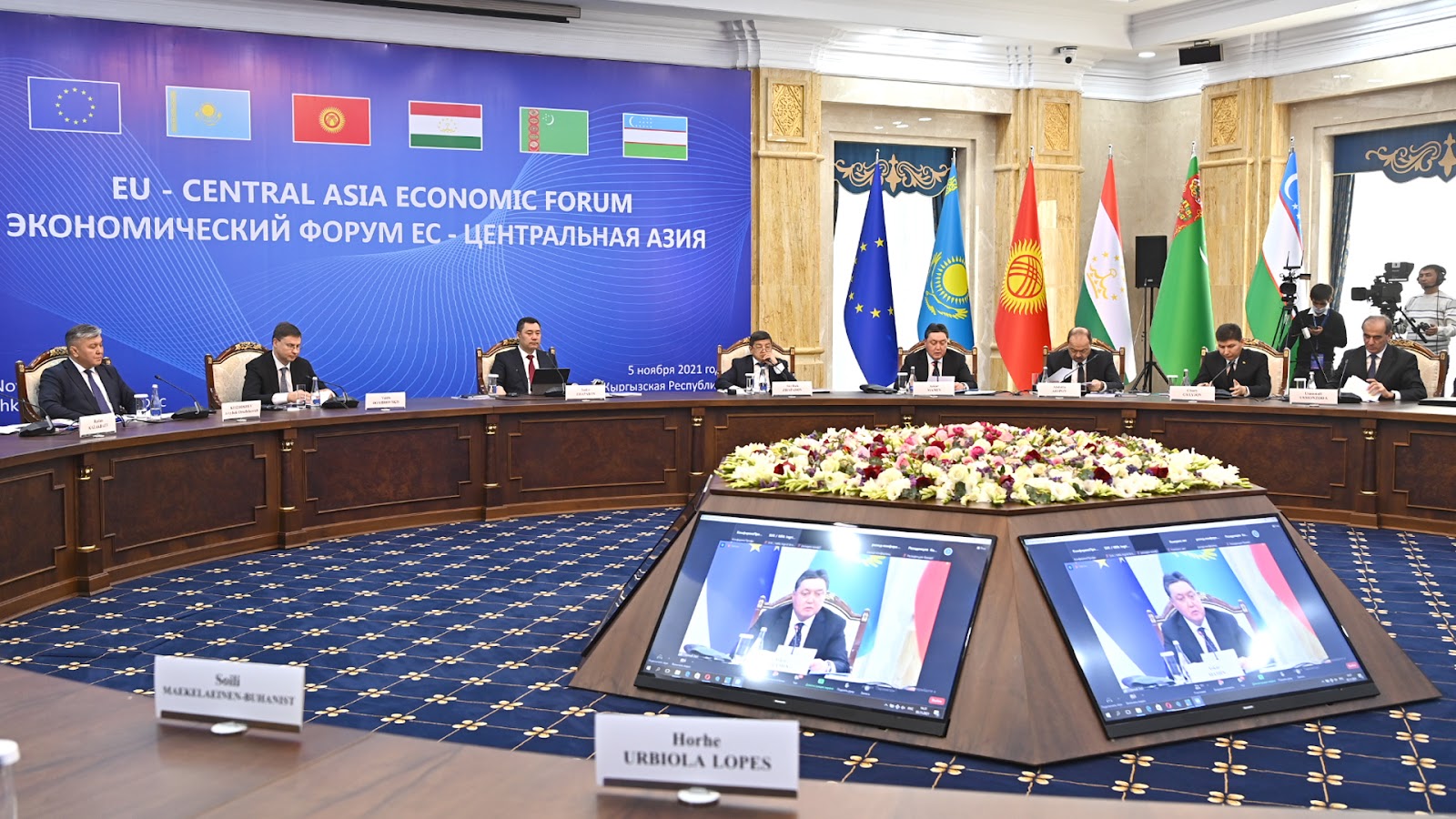 Addressing the forum, Mamin noted that the European Union is one of the most important and most stable economic partners of the Central Asian region.

Over the past 10 years, EU member states have invested more than 105 billion euros (US$121.3 billion) in Central Asian countries, which exceeds 40 percent of the total amount of foreign direct investment in the region. The EU accounts for more than a third of total foreign trade in Central Asia.

Mamin urged the forum participants to focus on improving the quality and accessibility of infrastructure connecting Central Asia and the European Union as well as creating new generation transport chains. According to the World Bank, facilitating Central Asia’s transport potential could add more than 15 percent to the region’s total gross domestic product.

The need for a new transport route becomes more evident given a 38 percent increase in the volume of transit container traffic through the territory of Kazakhstan along the China – EU route to almost 500,000 TEU in the first nine months of 2021.

To boost European investments in the region, the Astana International Financial Centre located in Nur-Sultan could play an important role. Nearly 70 European companies are registered in the center and enjoy a favorable tax, visa, and labor regime offered for the center’s partners.

As climate change tops the global agenda these days in light of the 2021 United Nations Climate Change Conference taking place in Glasgow that Mamin also attended, he reaffirmed Kazakhstan’s readiness to be a partner of the EU in achieving the goals and objectives of the European Green Deal, a set of proposals aimed at helping the EU become the world’s first climate-neutral bloc by 2050.

He also said Kazakhstan is ready to cooperate with the European Raw Materials and Accumulator Alliances and the European Investment Bank on environmental initiatives.

Special Representative of Kazakh President for International Cooperation Erzhan Kazykhan spoke at a session on the transition to an environmentally balanced, sustainable, climate and environmentally neutral economy. He briefed the participants on the role that Kazakhstan seeks to play in promoting the climate agenda in the region, and the country’s plans to achieve carbon neutrality by 2060. 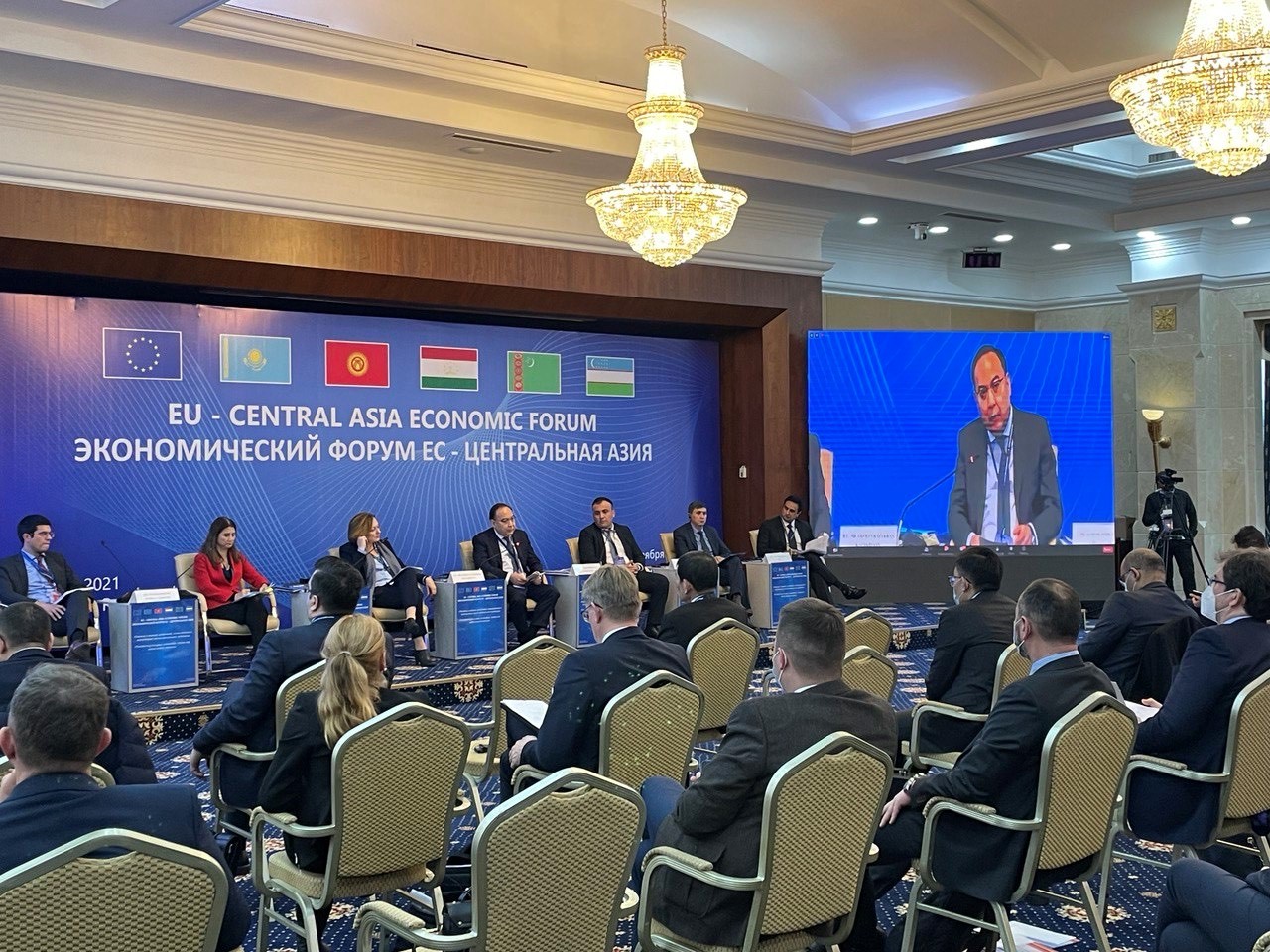 As part of his visit to Bishkek, Mamin held bilateral talks with the Executive Vice President of the European Commission Valdis Dombrovskis commending trade and investment flows between Kazakhstan and the EU.

Over the first nine months of 2021, the trade turnover has increased by 18.4 percent to $20.8 billion, while in the first half of 2021, the European investments in the economy of Kazakhstan grew 14.1 percent to over $4.7 billion.

During the meeting, they discussed Kazakhstan’s participation at the UN World Leaders Summit in Glasgow on Nov. 1 and the cooperation between Kazakhstan and the EU in realizing Kazakhstan’s goal of becoming carbon-neutral by 2060. 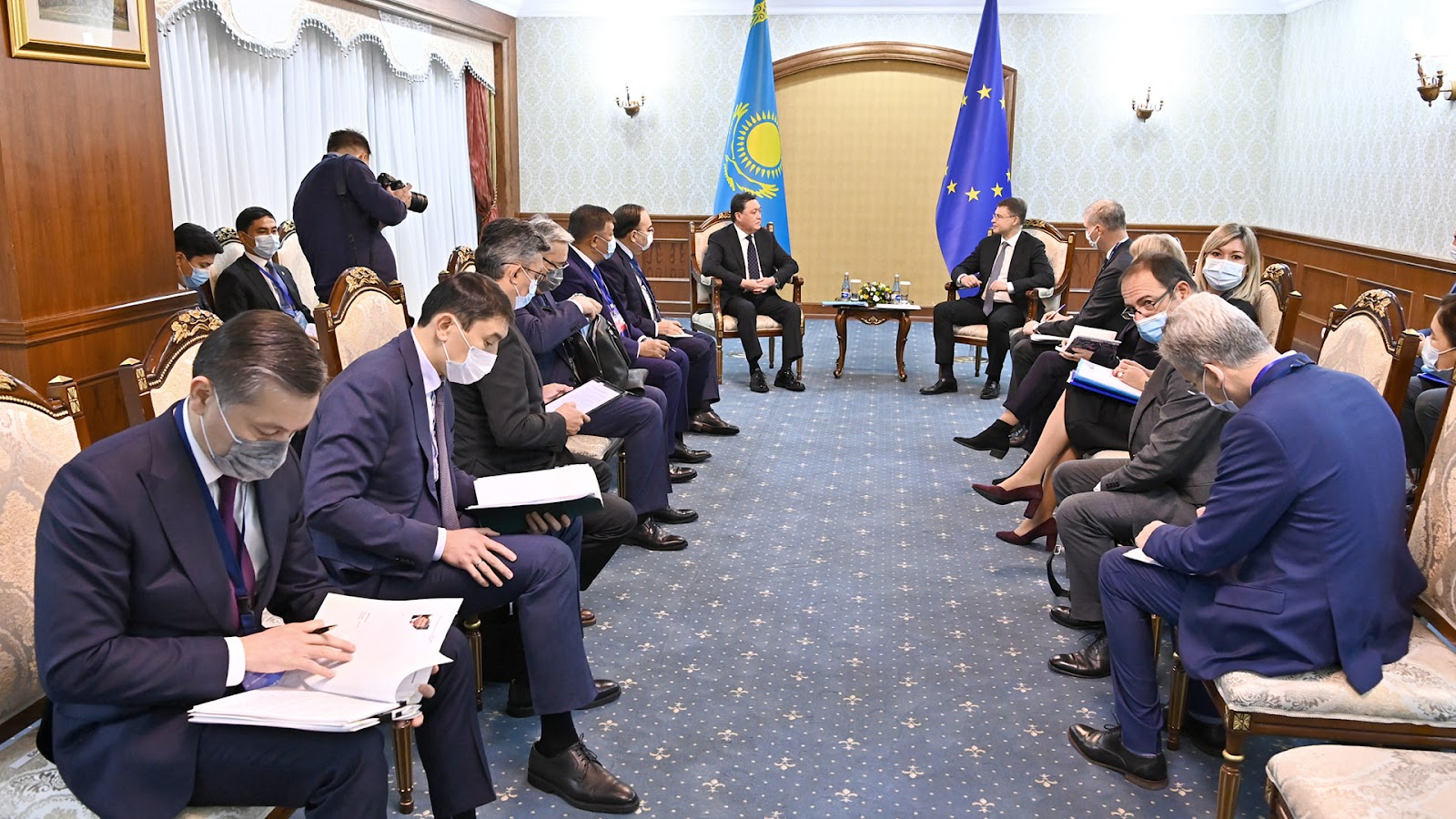 Mamin and Dombrovskis during their meeting. Photo credit: primeminister.kz.

Dombrovskis said that the EU is interested in strengthening cooperation with Kazakhstan and the region of Central Asia with a focus on the development of a green economy, including clean energy, transport, and improvement of the water management system.