By Saniya Bulatkulova in Culture on 10 September 2021

The Kazakh movie, which was produced by Kazakhfilm with a $6.5 million budget and first premiered in September 2019, is to be shown in over 200 theaters across the country. The film is distributed by Turkey’s Siyah Beyaz Movies company. In the first two days after the premiere “Tomiris” was watched by more than 10,000 Turkish viewers. 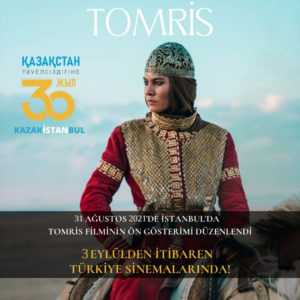 The gala was attended by Kazakh Ambassador to Turkey Abzal Saparbekuly, Consul General of Kazakhstan in Istanbul Alim Bayel, Turkish politicians, and representatives of the Kazakh diaspora. Director Satayev, and actress Almira Tursyn, who starred as Tomiris, also attended the event.

“Due to the quarantine, the premiere and cinema distribution of ‘Tomiris’ were postponed several times in Turkey. We were waiting patiently and now on  Sept. 3, our film is released on the big screens of Turkey,” said Satayev. 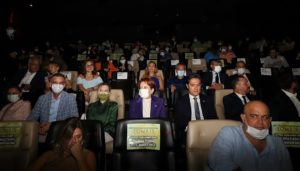 “I applaud the people who put it all together. I just watched the dubbed version. However, I think it would be better to watch it in its original language… It is not a movie to watch just to fill your free time, it is a serious production”, said one viewer on the Facebook account of the movie. Besides Turkey, the movie was shown in France, Spain, Romania, Japan and South Korea. At present, the film has been translated and duplicated in more than 10 languages.

Distributors from the United States, the United Kingdom, Italy, the Middle East, the Commonwealth of Independent States and Singapore also acquired the rights to show the movie about the legendary queen of the Great Steppe.

The historical movie received a Grand Prix at L’Étrange Festival in Paris and French premium television channel Canal+ acquired the rights to present the movie in its primetime line-up.

Nomad Stunts, headed by Zhaidarbek Kunguzhinov, who staged stunts in “Tomiris”, received a prestigious Taurus award given by the Worldwide Academy of Stunts, an equivalent to an Oscar award only for stunt performers.