NUR-SULTAN – Kazakhstan’s top chess player Rinat Jumabaev advanced to the fourth round of the World Cup in Sochi on July 19 by eliminating the world’s number two player from the U.S. Fabiano Caruana, reported the press service of International Chess Federation (FIDE). 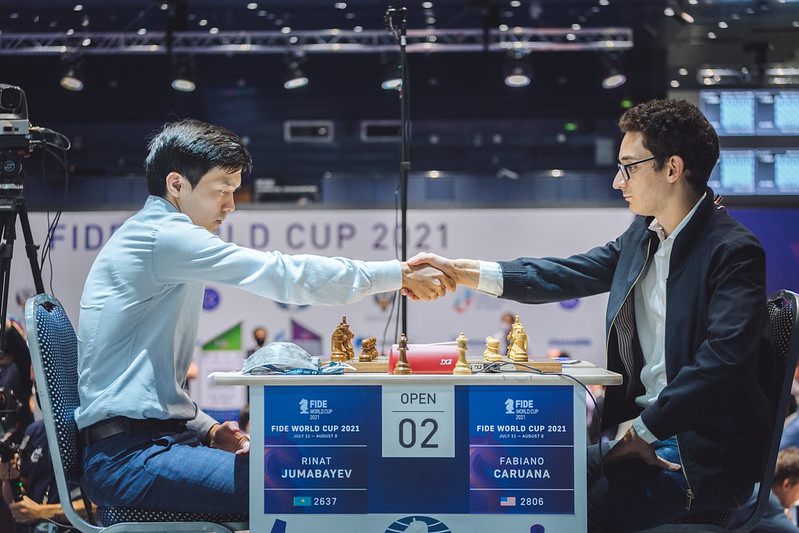 The result of the match between Jumabaev and Caruana was decided in two games without a tie break. Photo credit: FIDE.

The first game between the two players ended in a solid draw. The second game showed equal effort and skill from both Jumabaev and Caruana but Caruana’s one mistake led to Jumabaev’s advantage and eventual victory. The final score of the game is 1.5:0.5.

“I was only thinking about the next game. I supposed that if I did my best I would have the chance to beat Fabiano. Indeed, he is one of the best players in the world but I tried to fight in every single game,” said Jumabaev in his post-match interview.

Jumabaev is one of the four Kazakh chess players competing at the World Cup in Sochi this year, along with Zhansaya Abdumalik, Dinara Saduakassova and Bibisara Assaubayeva.

In June, Abdumalik became the first ever female player from both Kazakhstan and Central Asia to receive the Man Grandmaster during her stellar performance at the 2021 Gibraltar FIDE Women’s Grand Prix.

Both Saduakassova and Assaubayeva have the titles of International Master and Woman Grandmaster under their belts. Assaubayeva is also the youngest Kazakh representative at the World Cup, as she is only 17 years old.

Young-and-coming players from Uzbekistan are also showing great victories against top-ranked players with  Jakhongir Vakhidov winning against Lenier Dominguez from the U.S. and Javokhir Sindarov upsetting Alireza Firouzja from France.

Chess remains one of the most popular sports in Kazakhstan with nearly 200,000 people professionally engaged in it, according to Executive Director of the Kazakh Chess Federation Irina Grishchenko.

Nurgaliyev won chess gold at the French Chess Rapid and Blitz Open tournament back in 2018 when he was just eight years old.

Tulendinov came out on top in the under-seven category at the FIDE World School Chess Championship in Durres, Albania also in 2018 when Tulendinov was seven years old.

In 2016, Zakirova became the world chess champion in the under-eight category at eight years old based on the results of the World Cadets Chess Championship.

To encourage interest in the sport among Kazakh children, more than 2,000 children study chess in at least 44 schools in Almaty, Kyzylorda, Pavlodar and Shymkent using textbooks issued by the Ministry of Education and Sciences.