By Zhanna Shayakhmetova in Nation on 1 June 2020

June 2 marks the 65th anniversary of the Baikonur Cosmodrome, the world’s first and largest space launch facility. Baikonur was always a source of pride for all citizens but Kazakh people had a special attachment to the facility and their own feelings watching the first man be launched into space out of Kazakhstan. 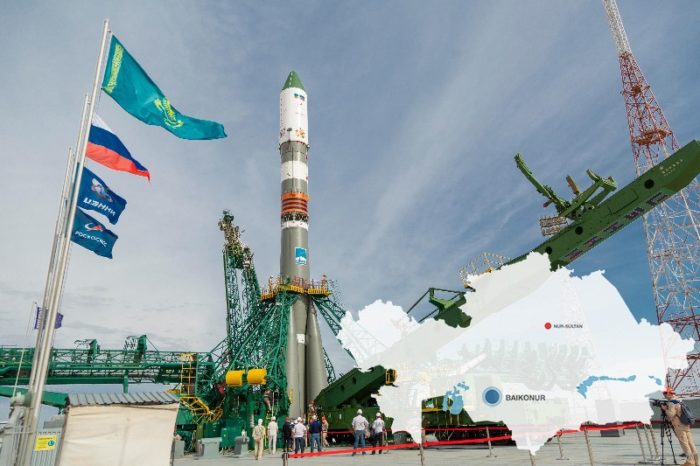 The launch of the Soyuz 2.1a space launch vehicle with the Soyuz MS-16 crewed spacecraft on April 9. Click on the picture to see the full image of the map.

Baikonur is located in Kazakhstan’s Kyzylorda region near the village of Tyuratam. The feather grass Kazakh steppe is also the first thing the crew sees when they return to Earth as the spacecraft used to land between the two cities of Arkalyk and Zhezkazgan.

The Kazakh word “Baikonur” means “Rich Valley” and it entered the annals of world cosmonautics when it became the site of two major historical events in the global space industry with the launch of the first artificial Earth satellite and then the first manned spacecraft. All major Kazakh and Russian and many international space projects are being implemented at Baikonur.

It is one of the most important sites for the world’s space industry as all types of space vehicles are launched from the station. The Vostok, Voskhod, Soyuz manned spacecrafts, the Salyut and Mir orbital stations, and the Energy-Buran reusable system as well as interplanetary spacecraft and artificial Earth satellites – all of them were launched from Baikonur. According to estimates, more than 50 percent of all world space launches were carried out of Baikonur.

Overall, there have been 5,000 missions launched from the cosmodrome, according to Russia’s Roscosmos company which operates out of the cosmodrome. 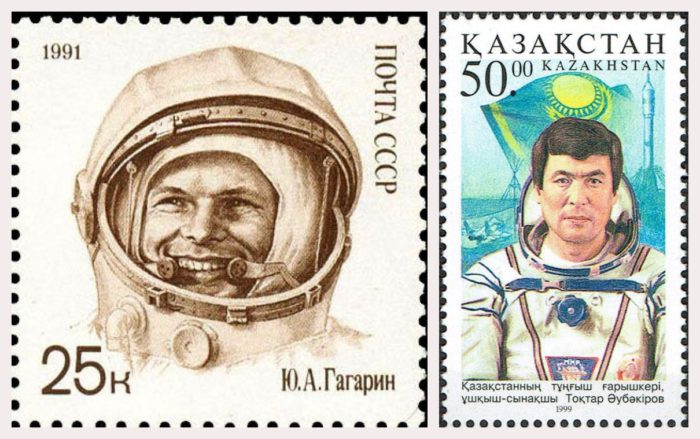 The postage stamps depicting Soviet cosmonaut Yuri Gagarin (L), who became the first human in space and the first Kazakh cosmonaut Toktar Aubakirov who went to space in 1991.

Due to the outbreak of Coronavirus, celebrations around the Baikonur Cosmodrome’s anniversary have been postponed to Oct. 4, according to the Baikonur city administration. The new date coincides with the launch of the first artificial Earth satellite in 1957. The local authorities noted that it is important “to commemorate the anniversary of the space center and pay tribute to veterans who contributed to national space exploration.”

After the collapse of the Soviet Union, Kazakhstan continued its cooperation with Russia on joint activities involving the cosmodrome. The Baikonur Cosmodrome is an area of approximately 6,717 kilometres and Baikonur City has a population of 77,208 people located approximately 40 kilometres from the cosmodrome, which has been leased by Russia until 2050. Kazakhstan has appointed a special representative from the Kazakh President to work with the Baikonur cosmodrome.

Despite the lockdown, the operations have been continuing at the space center, but visits and gatherings were banned. A regime of increased alertness was introduced guided by the sanitary and epidemiological measures adopted both in Kazakhstan and Russia on March 16.

On April 9, the Soyuz 2.1a space launch vehicle with the Soyuz MS-16 became the first crewed spacecraft launched in 2020.  The ISS-63 crew consisted of Russian cosmonauts Anatoly Ivanishin and Ivan Wagner and NASA astronaut Christopher Cassidy.

The latest Soyuz-2 space launch vehicle with the Progress MS-14 cargo ship took place on April 25. The rocket was dedicated to the 75th anniversary of the Great Victory in WW2 and decorated in theme as well.

The launch is part of the International Space Station (ISS) program and is expected to take place on the 23rd of July. The Soyuz-2-1a space launch vehicle was set to be launched with the Progress MS-15 spacecraft to deliver necessary equipment to the astronauts at the station. The next launch of the Soyuz MS-17 spacecraft with a Russian-American crew on board is scheduled for October 14.

Dossier
– The Baikonur Cosmodrome has 15 stations for launching the Proton, Zenit, Soyuz, Cyclone, Rokot and Dnepr LVs spacecrafts and four launchers for testing intercontinental ballistic missiles.
– Baikonur has unique location features due to its relative proximity to the equator and location in a sparsely populated area. The linear speed of the Earth’s rotation at the latitude of Baikonur is 316 meters per second, which is considered a favorable condition for launching into orbit.
– The cosmodrome was founded by the Soviet Union authorities in 1955. It was used to test intercontinental ballistic missiles (ICBMs) until 1957.
– Soviet cosmonaut Yuri Gagarin became the first man in space when the first manned spaceflight took place from Baikonur in 1961.
– Soviet cosmonaut Valentina Tereshkova became the first female in space with the Vostok 6 mission launched from Baikonur in 1963.
– Soviet cosmonaut Alexei Leonov became the first person to conduct a spacewalk in history in 1965 as part of the Voskhod-2 spacecraft launch, which took off from Baikonur.
– In 1991, Toktar Aubakirov was the first Kazakh cosmonaut who joined the crew at the Soyuz TM-13 spacecraft, which flew from Baikonur.
– American astronaut Daniel Burbank joined the Russian spacecraft to the ISS launched from Baikonur in 2011.
– According to the Roscosmos company, more than 10,000 people currently work at the Baikonur space facility.