By Aidana Yergaliyeva in Nation on 11 January 2021

NUR-SULTAN – International observation mission heads and delegates summed up their observations and recommendations on voting procedure and citizen participation in the Jan. 10 Kazakhstan’s parliamentary election at the Jan. 11 press briefings in Nur-Sultan. 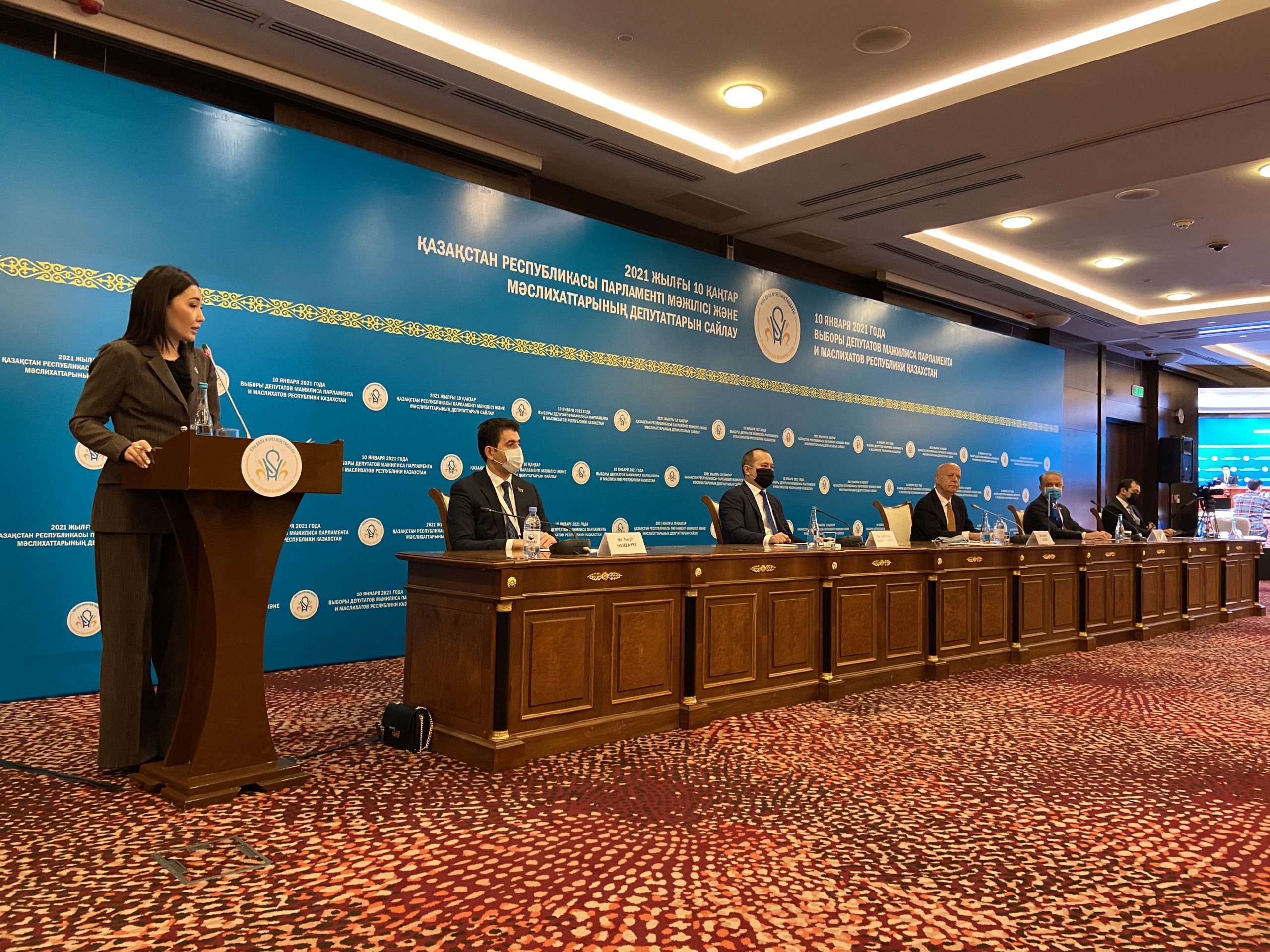 The Parliamentary Assembly of Turkic-Speaking Countries during a Jan. 11 briefing in Nur-Sultan. Photo credit: Aidana Yergaliyeva.

Similar to observers from foreign states, observation missions from the Shanghai Cooperation Organisation (SCO), the Parliamentary Assembly of Turkic-Speaking Countries (TURKPA), and Cooperation Council of Turkic Speaking States (Turkic Council) stressed the high level of preparedness of the polling stations in terms of their inclusivity and adherence to sanitary norms. The observation missions also agreed that the electoral process was free and fair.

“The mission recognizes the past elections as free, fair, reliable and democratic. The legitimacy of the elections is beyond doubt,” said SCO Deputy Secretary General Zhang Haizhou.

The missions mostly visited polling stations in Nur-Sultan, which had 45.1 percent voter turnout. The observers reported no violations, and full compliance with the electoral process according to legislational norms, and democratic best practices.

“We talked to local observers and political parties. They had the opportunity to share objective information with the public. We were happy to learn that. We saw a media representative among the observers and this is very good. The parties had their own observers. This was a positive factor in our opinion,” said TurkPA mission head Ismet Uçma.

The TurkPA, in particular, appreciated Kazakhstan’s new 30 percent quota for women and young people under 29. Uçma referred to it as “a good improvement.” The mission head also noticed many women and youth showing up to vote at the polling stations.

The TurkPA also noticed improvements in the work of the Kazakh Ministry of Information and Social Development with the population. In addition, the voters who were not able to visit their polling stations had a chance to vote at the place of their residence, Uçma said.

Deputy Secretary General of the Turkic Council Ömer Kocaman, however, reported that their mission noticed lack of ramps in some polling stations, and no curtains or doors at the cabins.

The Organisation for Security and Co-operation in Europe (OSCE) Office for Democratic Institutions and Human Rights (ODIHR) and OSCE Parliamentary Assembly (OSCE PA) also noted the general preparedness of the polling stations.

“We welcome the efficient organization of the elections, especially given the challenges posed by the COVID-19 pandemic which was rightfully not allowed to impact the exercise of voting,” said Kristian Vigenin, the leader and special coordinator of the short-term OSCE observer mission.

The OSCE observers could deploy only a limited number of observers that visited 19 polling stations in 13 regions. Yet the observation mission recommends Kazakhstan continue refining and working on new reforms and expect greater progress in the following elections.

“The reforms have been made, but the threshold for a new party to register is high. We encourage the changes. But we recommend improving it further. So the registration process would be easier for new political movements,” said Vigenin. “OSCE principles call for unhindered pluralism and a flourishing, free and vibrant civil society: our hope is that the ‘listening state’ concept promoted by the President will truly enable this to happen and that all citizens’ voices will be valued.”

The OSCE deployed 48 observers from 20 countries, including 41 ODIHR-deployed experts and long-term observers, and seven parliamentarians and staff from the OSCE PA.