By Zhanna Shayakhmetova in International on 11 December 2020

NUR-SULTAN – Kazakhstan and the United Kingdom confirm their plan to further expand their strategic partnership in the post-COVID-19 period. This was announced at the seventh plenary session of the Kazakh-British Intergovernmental Commission on Trade, Economic, Scientific, Technical and Cultural Cooperation (IGC) which was held virtually on Dec. 9. 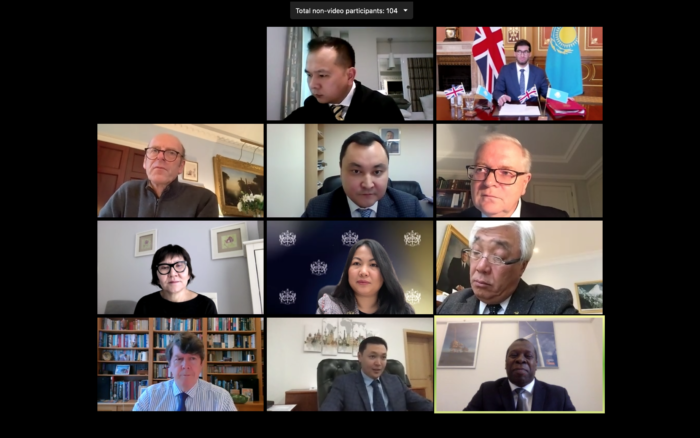 The direct investment from the U.K. increased by 33 percent despite the pandemic outbreak, said Kazakh Vice Foreign Minister Almas Aidarov. He stressed that Kazakhstan seeks to attract not only foreign direct investment, but new knowledge and technologies. He called on British companies to take part in the Digital Kazakhstan initiative.

British International Trade Minister Ranil Jayawardena noted that Kazakhstan and its capital have the potential to become an international trade hub. In this light, British companies are ready to provide the goods, services and financing needed to achieve this goal.

“I look forward to further strengthening our ties in the new year as an independent trading nation,” Jayawardena wrote on his Twitter.

Jayawardena said that British business is interested in investing in Kazakhstan’s agri-industrial sector.

More than 100 people took part in the meetings of the commission’s working groups, which were also held from Nov. 10 to Dec. 3.

The participants of the working groups reviewed the results of the commission’s activities over the past year, and discussed the further development of multifaceted bilateral cooperation. The prospects for cooperation in energy, financial and mining sectors, healthcare and education were on the agenda.

The representatives of the Astana International Financial Center (AIFC) reported that they adopted the strategy for regional leadership in the field of green finance and developed schemes and rules for issuing green bonds based on international standards.

It was noted that the large oil companies in Kazakhstan intend to diversify their asset portfolios to environmentally friendly and low-carbon energy sources during the meeting of the working group on energy. The companies plan to integrate renewable energy into oil and gas operations, and conduct decarbonization campaigns at the subsidiary and contractor level.

The members of the working group dedicated to subsoil use discussed the positive trends in the industry as Kazakhstan adopted the new code on subsoil use. The draft of a new Environmental Code is also designed to improve environmental regulation, introduce new incentives on environmental impact assessment, facilitate the use of technologies and automated environmental monitoring.

The officials also spoke about digital education in Kazakhstan. The representatives of the British Educational Suppliers Association (BESA) and the British Council shared their vision on digital education and their experiences to ensure lifelong learning during the quarantine restrictions.

During the event, the British company Twig and Kazakh company Bilim Media Group presented their first joint platform www.twig-bilim.kz, which is gaining popularity among schoolchildren and students.

The working group on healthcare informed the participants about plans to build 18 hospitals in Kazakhstan through a public-private partnership.

A protocol that includes long-term plans for bilateral cooperation was also signed at the event.

The U.K. is one of Kazakhstan’s largest investors. As of Feb. 2020, two-way trade between the UK and Kazakhstan was $3.2 billion. In 2019, British companies exported $2.6 billion in goods and services to Kazakhstan and the UK imported $737 million in goods from Kazakhstan.