By Zhanna Shayakhmetova in Culture on 20 September 2020 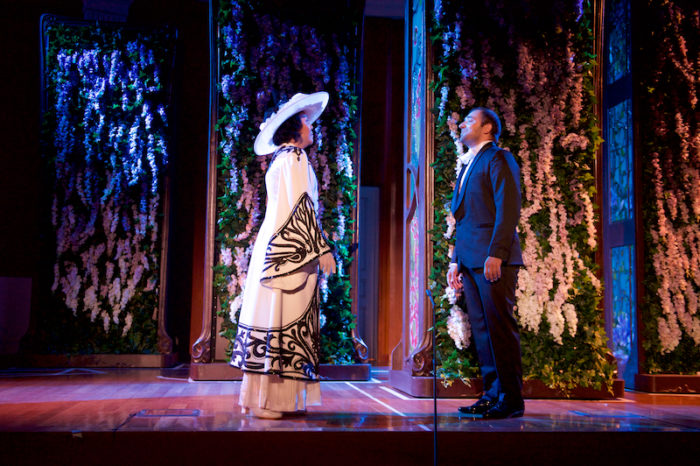 The main feature of the production is the contemporary setting where the story, which is traditionally set in the 19th century, is transferred to the very beginning of the past century.

Set and costume designer Manana Gunia noted that the team has set the story in the 1910s, which is the twilight of the so-called La Belle Époque. “This era is a turning point in which a social and economic crisis was brewing in European society, the First World War was looming, old society had outlived its purpose and had thoroughly degraded, but a new one had not yet come to replace it. Or, rather, unprincipled and cynical people were making plans to take the place of the old elite. There was a reassessment of moral, cultural and social values within society at the time,” she said.

The “Don Pasquale” opera is one of the most popular Italian operas and is performed annually in more than 150 theatres. According to the plot, Don Pasquale, a rich and old man is in love with a young woman. To dissuade the old man from getting married, his friends arrange a fictitious marriage with a woman who transforms from a modest girl into a hot-tempered one that begins to drive her husband mad. The opera does feature what could be called positive characters. The whole cast is driven by greed, ambition and envy.

“The story of Don Pasquale is typical, but also universally applicable,” said Artistic Director of the production Ala Simonishvili, trying to explain the popularity of the opera. “The author called his opera a dramma buffa (funny drama). His emphasis was not on the comedic, but, rather, the satirical aspect of this opera, which is relevant at all times. Each character pursues his or her own goal and as it usually happens, someone achieves everything while someone else fails.”

Earlier, the Astana Opera House announced plans to begin its new season with an online gala opera titled “Through the Pages of Opera Classics” on Sept. 18. The fall repertoire also includes “The Silver Age Ballets,” “Scheherazade”  and “The Six Dances” which will also be performed for an online audience.