By Zhanna Shayakhmetova in International on 27 May 2020

Kazakh President Kassym-Jomart Tokayev will take part as an honored guest at the 2020 Moscow Victory Day Parade dedicated to the 75th Anniversary of the allies’ defeat of Nazi Germany. This was announced during Tokayev’s telephone conversation with Russian President Vladimir Putin on May 26. He is one of the first world leaders to accept the invitation after the Kremlin’s decision to hold the event on June 24. 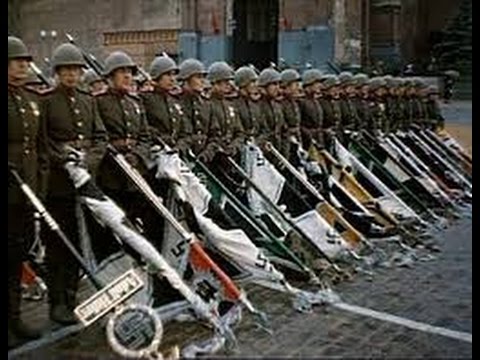 A scene from the documentary about the legendary Victory Day Parade on the Red Square on June 24, 1945.

The  Victory Parade on the Red Square to commemorate the end of World War II in Europe, or the Great Patriotic War as it was known in the Soviet Union, is held annually on May 9. This year, Putin made the decision to reschedule the event because of the events surrounding coronavirus.  The new date was announced in Moscow on May 26.

On June 24 1945, a historic and spectacular Victory Parade was held on the Red Square featuring the combat units that distinguished themselves most in the battles against the formidable Nazi war machine. Kazakh soldiers were well-represented among the best of the best as well. For instance the legendary pilot and Hero of the Soviet Union Talgat Bigeldinov, and gunner Mukhangali Turmagambetov marched in the ranks. 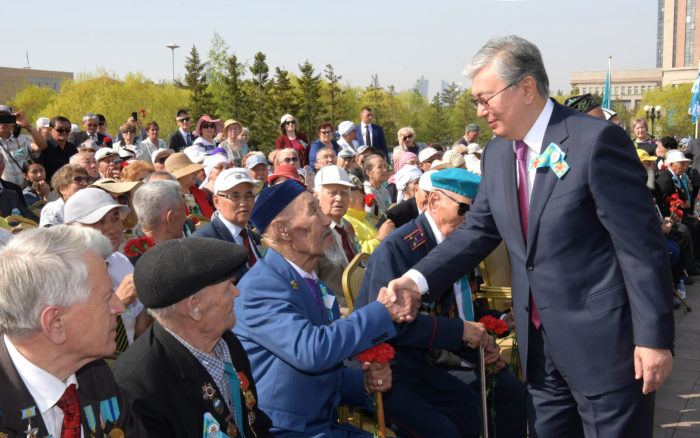 President Kassym-Jomart Tokayev congratulated war veterans and home front workers who took part in the ceremonial review of the guard of honour in Nur-Sultan on May 9, 2019. Photo credit: Akorda.kz.

This year, Kazakhstan сelebrated V-Day on May 9 without a parade and mass gatherings. On that day, Tokayev made a statement that he considers Victory Day a “bright example of the unparalleled bravery of our fathers and grandfathers, who defended their homelands and crushed the Nazi incursion on the battlefield.” Kazakh citizens helped defend Leningrad and Stalingrad and liberate Ukraine, Belarus, Moldova, the Baltic nations and the other peoples of Europe from the beginning of the war to its end in the spring of 1945 in Berlin.

Some 1.2 million people were mobilized and half of them did not come back. Every fifth Kazakh participated in the war. Nine out of 10 bullets were made in Kazakhstan. Some 1,500 wagons with clothing and food and 150,000 horses were sent to the front. Overall, 528 Kazakh soldiers became Heroes of the Soviet Union and 110,000 individuals received the Order of Glory.

During the conversation on May 26, the Presidents of Kazakhstan and Russia spoke about strengthening bilateral cooperation within the Eurasian Economic Union (EAEU) and cooperation with other countries in the fight against the COVID-19 pandemic.