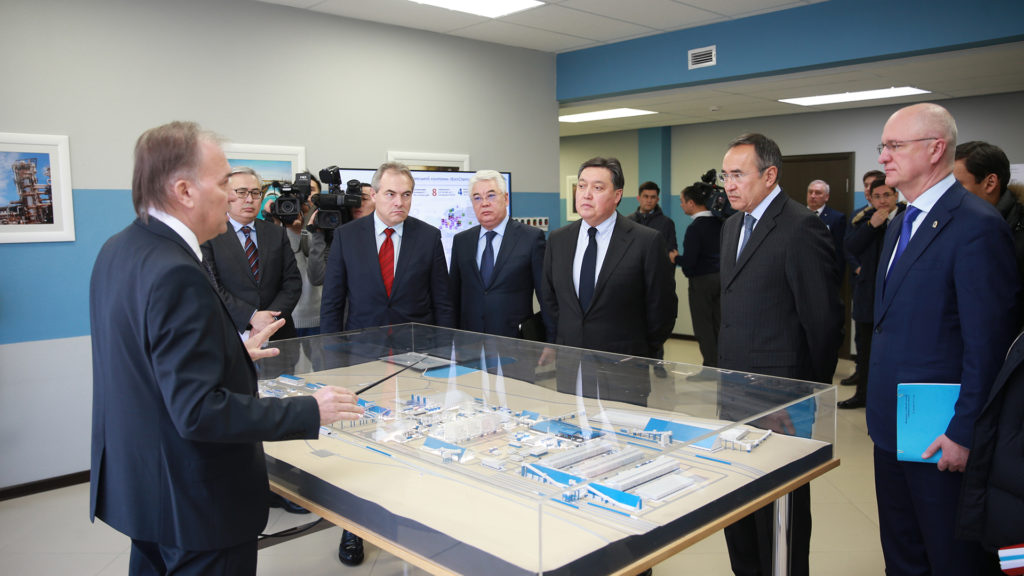 EuroChem will produce one million tonnes of fertilisers per year. EuroChem’s technology allows phosphate and complex fertilisers to be created without generating phosphogypsum waste and generally minimise harmful environmental impacts.

The project will also produce 120,000 tonnes of calcium chloride and at least 400,000 tonnes of gypsum dehydrate per year. These can be used in the road, oil and gas, construction and agriculture industries.

The prime minister also visited a wind farm currently under construction in Zhanatas. The wind power plant cost 50 billion tenge (US$131.5 million) to build. It will generate 100 megawatts of clean electricity in its initial stage, with production increasing up to 200 MW. Some 19 wind turbines have been installed so far, and 40 are expected to be installed by the first quarter of 2020.

The Qazaqsoda company will build a soda ash plant, to be finished in 2022, at a cost of approximately 127 billion tenge (US$446.9 million). Production is planned to be 400 tonnes per year in its initial stage and to grow to one million tonnes per year.

Mamin participated in the presentation of the third production line of the Saule confectionery factory. The enterprise will generate 70 new employment opportunities.

Mamin also visited the Regional History and Local Lore Museum and the Art Gallery at the Kune Taraz Historical and Ethnocultural Complex, which opened Dec. 25 to commemorate the 8th anniversary of the Zhambyl region. Overall, production output for the first 11 months of 2019 in the Zhambyl region cost 319.5 billion tenge (US$840.4 million) and investments in fixed assets were 250.1 billion tenge (US$657.9 million). From 2020 to 2025, 66 investment projects with a total budget of 2.7 trillion tenge (US$7.1 million) will be realised and are expected to create more than 11,000 jobs.