By Amir Khaidar in International on 21 October 2019

ALMATY – The European Union, the United Nations Development Programme (UNDP) and Kazakhstan launched Oct. 18 an education programme to train and educate several dozen Afghan women in Kazakh universities over the next five years. 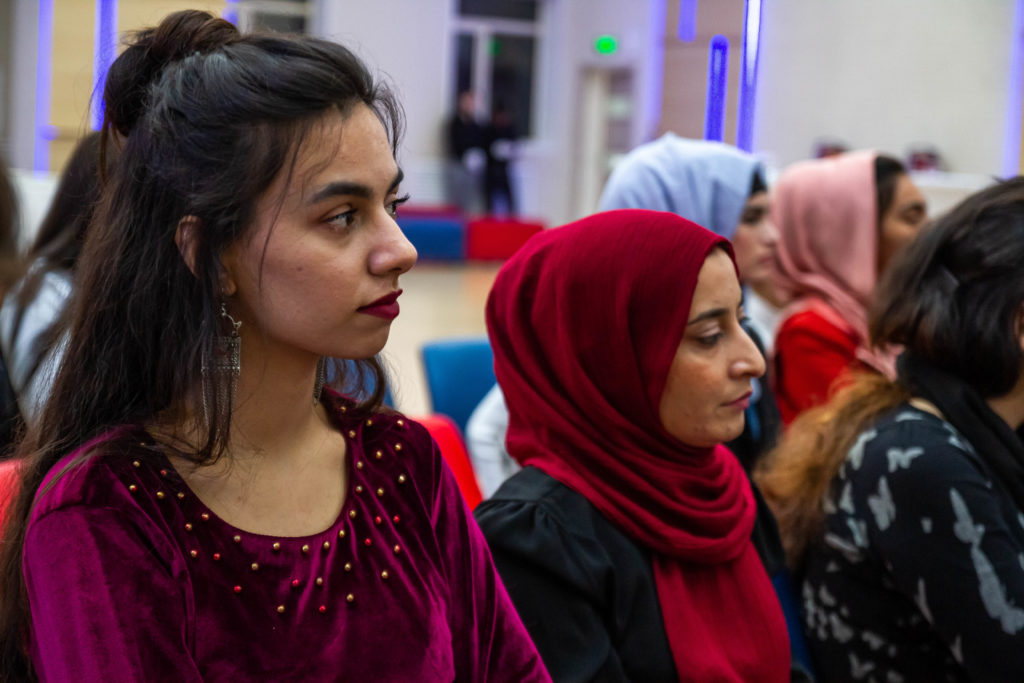 The first group of thirty women were selected in September out of 535 initial applicants. The selected women passed a three-stage selection process that included an English placement test and an interview.

On Oct. 18, the Almaty Management University (Alma U), where the Afghan students will get their foundation training, hosted a reception in their honour with remarks from international and Kazakh officials, as well as some of the students themselves.

Between now and 2025, 50 Afghan students, including 10 women who will study in Uzbekistan, will receive bachelor’s, master’s and technical degrees in agriculture, applied statistics and mining in universities across Kazakhstan and Uzbekistan.

The United Nations Women will organise summer schools that will train the women in entrepreneurship and networking to contribute to their post-study employment and economic empowerment. 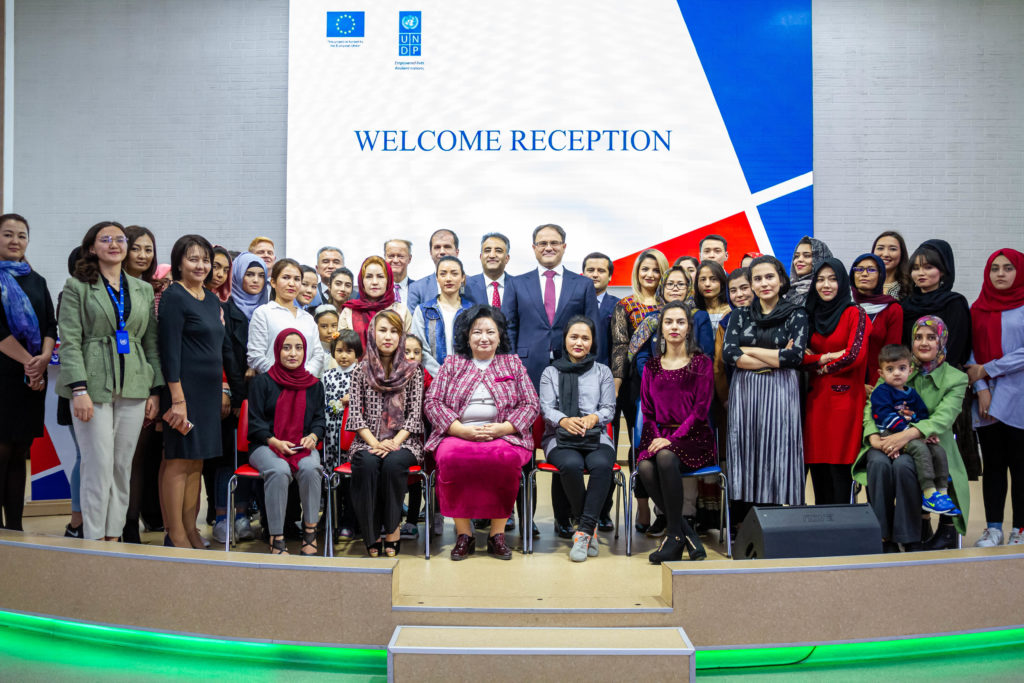 Afghan students and Kazakh and international officials post for a group photo at the Oct. 18 welcome reception in Almaty. Photo credit: Sergey Nagaibekov.

EU High Representative for Foreign Affairs and Security Policy Federica Mogherini announced in September 2018 in her video message to the regional conference in the Kazakh capital on empowering women in Afghanistan that the EU will provide $2.2 million for the programme.

“It is our principled position that Afghanistan should not be viewed as a source of challenges but as a source of opportunities,” Kazakhstan’s Deputy Foreign Minister Roman Vassilenko said in addressing the Oct. 18 event. “It is, therefore, critical to integrate the economy of Afghanistan with its neighbouring countries through enhanced interaction and connectivity and investing in and developing regional infrastructure, trade, and transit transportation projects. To achieve this, Afghanistan needs professionally educated human capital, and we are privileged to be able to help.”

Women are central to economic growth and sustainable development, said EU Ambassador to Kazakhstan Sven-Olov Carlsson during the reception in Almaty.

“At the core of the common approach between the EU, Afghanistan and Central Asia, is our firm conviction that investing in education by connecting three countries like Afghanistan, Kazakhstan and Uzbekistan, we can help strengthening the social and economic linkages among them, thus also contributing to addressing common security challenges and promoting a more peaceful and prosperous world,” said Carlsson.

“Promoting women’s economic empowerment, ensuring gender equality, and facilitating easy access to education are priorities the UNDP continuously works on around the world. Here in Kazakhstan, we promoted education opportunities for women from Afghanistan in the past as part of the cooperation with the government of Kazakhstan,” said UNDP Resident Representative in Kazakhstan Yakup Beris. The UNDP is a partner in implementing the programme on behalf of the European Union.

“We believe that education is power, and we all believe that education is the only tool that can defeat poverty and injustice. Women that are here are not ordinary people, they are extraordinary, these women are intelligent and brilliant, they know how to cope with challenges, because coming here was not an easy part, they faced many challenges, but they never gave up,” said one of the scholarship recipients Muzhgan Hussaini.

“Kazakhstan’s $50 million education programme has been successful and it is gratifying that it has now served as the foundation for this new joint programme with the European Union,” Omirtay Bitimov, former Kazakh ambassador in Kabul and current chair of the Almaty-based AFGQAZ Association for Development and Partnership, said in an interview for this story.

Bitimov said some of the almost 900 graduates of Kazakhstan’s programme to date now serve in top positions in the Afghan president’s office, government ministries, the border guards and police, while others work as respected doctors, engineers and journalists.

A retired general and former head of Kazakhstan’s intelligence service who spent 15 years in Afghanistan between several tours, Bitimov highlighted the relative low cost of education coupled with its good quality, the accumulated experience of running an education programme for Afghans since 2010, as well as the overall positive security situation in Kazakhstan and its proximity to Afghanistan as some of the key factors that conditioned the EU’s decision to opt for a joint programme.

The choice of English, which increasingly plays a bigger role in Afghanistan, as the language of tuition, is also attractive to Afghan students in their training in Kazakhstan, he added.

Upon arrival to Kazakhstan, Afghan students participated in an orientation week at Alma U, where they learned about the upcoming training programme and toured the city.

They will now have an eight-month English language course with the subsequent admission to the bachelor’s, master’s and technical programmes in the Kazakh universities.

“We prepared a special programme for Afghan women which includes entrepreneurship, leadership, and communications course, because we believe that every woman can be a leader in Afghanistan and when they come back to their own country, they will create new companies, they will be professionals in different spheres,” Alma U Rector Gulmira Kurganbayeva told The Astana Times.

Kurganbayeva also explained that her university is even going as far as helping some of the students, who arrived in Almaty with their small children, with placing the kids in local kindergartens and schools.

The initiative is expected to help create new business and employment opportunities for the women and their communities in Afghanistan. It is also expected that the new programme will only be a first phase of a much larger cooperative effort between the European Union, Kazakhstan and Uzbekistan to assist Afghanistan in educating its people.

According to the 2018 UNDP Human Development Report, 11 percent of all adult Afghan women have reached at least a secondary level of education and only 19.5 percent are employed, while these numbers are 37 percent and 87 percent for men, respectively.