By Elya Altynsarina in International on 26 October 2018 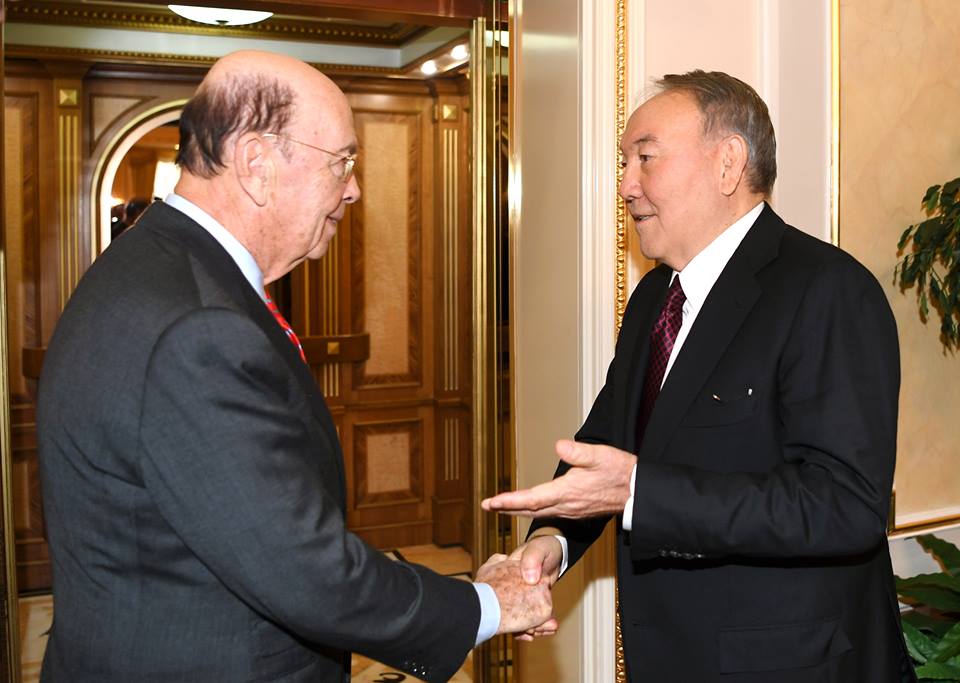 Ross visited Kazakhstan for three days as part of a Central Asian tour and also met with Kazakh Prime Minister Bakytzhan Sagintayev, government ministers and officials overseeing economy, trade and investments. He also participated in business forums in Astana and Almaty, where 16 American companies and Kazakh businesses were expected to sign commercial deals. 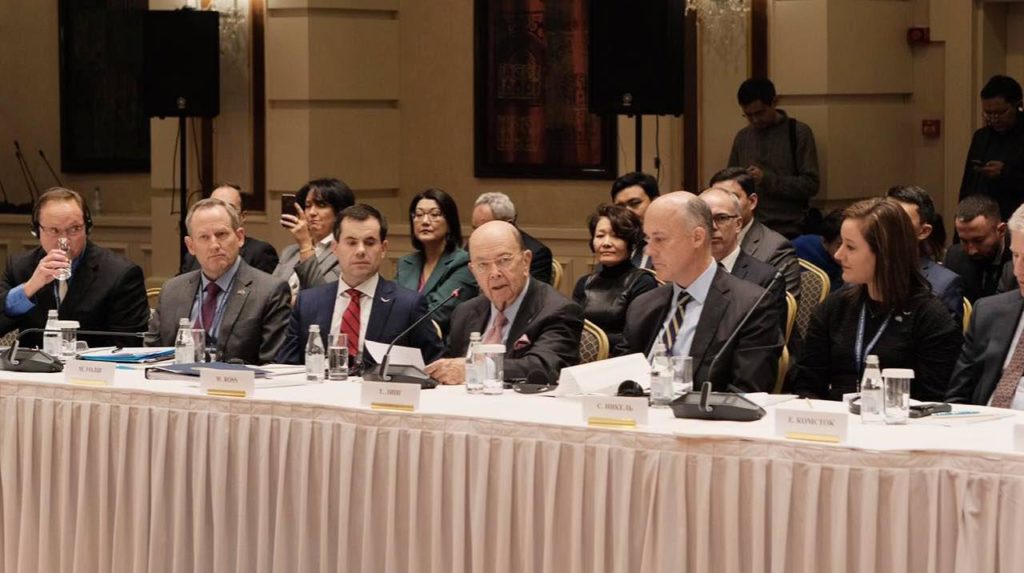 “During our meeting with President Donald Trump [during the visit to the U.S. in January 2018], we have reached an understanding. As it reads in our statement, Kazakh-American relations reached the level of an expanded strategic partnership. I met with a large group of U.S. business captains; with the trade volume at $2 billion, we signed 27 different commercial documents totalling $7 billion, and today trade grew by another 30 percent,” Nazarbayev noted. 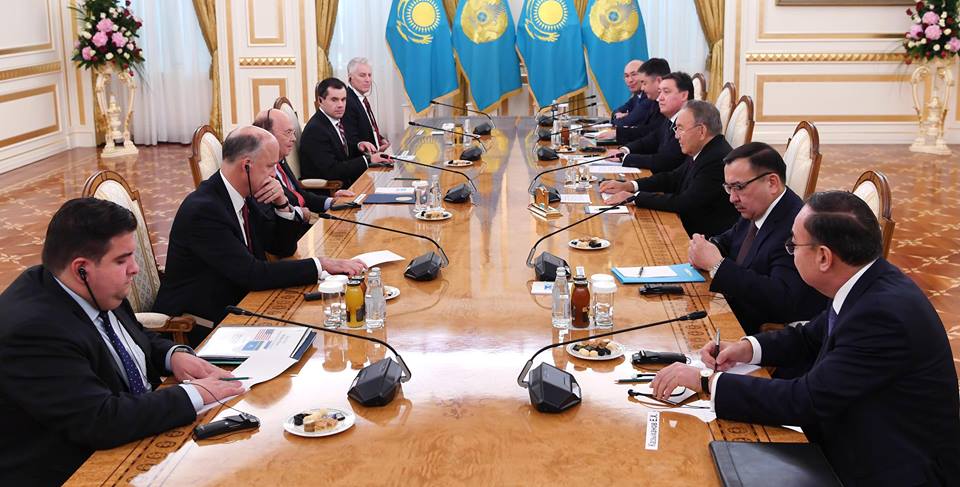 Kazakh-American relations are rooted in Kazakhstan’s decision to abandon its nuclear weapons and close the Semipalatinsk nuclear test site, followed by the signing of the first cooperation agreement with then President George W. Bush. At that time, Chevron was among the pioneers of investing in Kazakhstan, whose history, as the Kazakh President stated, “shows how one can successfully conduct business in Kazakhstan.”

“Kazakhstan is pursuing a multi-vector policy and maintains good relations with all of its partner countries,” Nazarbayev stressed.

Ross said he was impressed by Astana’s success.

“This is my first time in Kazakhstan, I was struck by the architecture of your capital that I witnessed on my way from the airport,” he said.

In a separate meeting with high-level government officials led by Prime Minister Sagintayev, the American delegation discussed expanding trade and investment cooperation as well as implementing agreements reached in January.

The same source quotes the National Bank of Kazakhstan which reported the United States-to-Kazakhstan direct investment in the first six months of 2018 reaching $2.79 billion, 44.7 percent higher than the same period in 2017 ($1.93 billion). Overall, from 2005 to July 2018, the gross volume of American foreign direct investment to Kazakh economy amounted to $33.76 billion.

In the past six months, more than 60 U.S. companies visited for business talks and meetings and more than 700 American companies are already working in Kazakhstan.

Describing Kazakhstan as a fast-growing country with vast natural resources and important geographic location in his interview to the state TV channel 24.kz, Ross said the outcome of his visit would be “to get closer together, get to better understand each other to promote the relationships between our countries.”

He said Kazakhstan’s friendly relations with its neighbours are one of the strongest aspects in Kazakh-American relations.

“[We are mostly interested in] natural resources, while the import of Kazakh agriculture products would be hard due to their perishability, but we are curious about your meat industry,” Ross said.

He also said the establishment of direct flights between Kazakhstan and the United States would encourage more Americans to visit Kazakhstan.

On Ross’s second day in Kazakhstan, the U.S. delegation including Valmont, MasterCard, Honeywell and Sierra Nevada Corporation, participated in a business forum with more than 100 companies from both countries, hosted by the American-Kazakhstan Business Association. 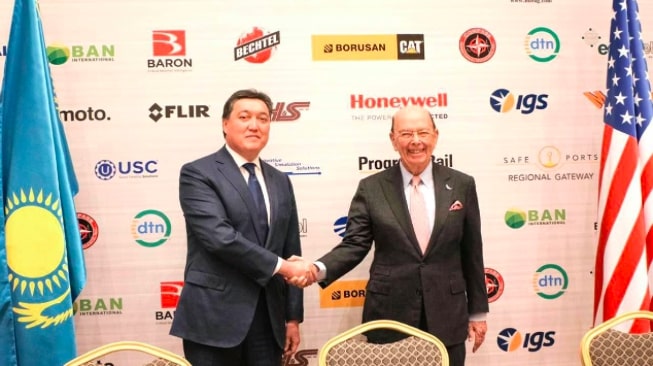 “U.S. is one of our leading investors with more than $40 billion invested in the economy of our country,” First Deputy Prime Minister of Kazakhstan Askar Mamin said at the forum.

He said the visit by the U.S. delegation resulted in agreements in aviation and space research, agriculture, the petrochemical industry and infrastructure development. He added these agreements are in addition to existing cooperation with Chevron, Exxon Mobil, General Electric, Halliburton and others.

Kazakhstan accounts for 70 percent of GDP and 80 percent of foreign direct investment inflow into Central Asia. The Kazakh government also promotes integration into global and regional trade and production processes as a driver of regional growth.

In September 2018, the government reported GDP growth at 4.1 percent. Foreign trade between January-August grew 22 percent: By the end of the year, it is expected to reach $100 billion, 65 percent of which is export.

“If the main areas of American capital previously were the mining and energy sectors, today we intend to invest in infrastructure development, processing, engineering, the agro-industrial complex and a number of other high-tech industries.”

Trade in services was also noted as a way to increase employment and value  in the U.S. and Kazakh economies.

Ross stressed the importance of implementing the agreements reached at the highest level, including concluding the “open sky” agreement on air traffic between Kazakhstan and the United States.

The document, if signed, would lift flight restrictions between the cities of Kazakhstan and the United States.

A similar business form is planned in Almaty during Ross’s third day in the country.