By Amir Khaidar in International on 15 May 2018

ASTANA – From May 23 to 26, Astana will host KADEX 2018, its international biennial exhibition of weapons systems and military equipment. Kazakh Minister of Defence and Aerospace Industry Beibut Atamkulov discussed in detail the format and content of the coming exhibition, the 5th KADEX, in an exclusive interview with The Astana Times. 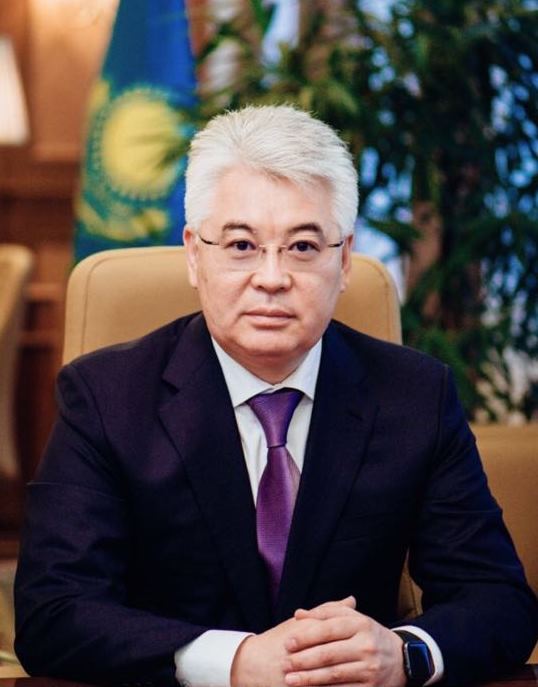 “This is the first exhibition to be held under the aegis of our ministry. Today, 43 official delegations, including from Russia, Belarus, Kyrgyzstan, Armenia, the United Arab Emirates, Turkey, Jordan, Azerbaijan, Egypt, Israel, Italy and Mongolia have confirmed their participation in the exhibition. Also, about 100 executives of foreign companies expressed a desire to visit KADEX 2018,” Atamkulov noted.

In total, more than 300 companies from 30 countries will showcase arms and military equipment, military and dual-use products, space technology and developments in information security.

“Visitors to KADEX 2018 will be able to get acquainted with the latest achievements and promising scientific developments of military-industrial and space enterprises. One hundred and twenty-four units of ground equipment and 18 types of aviation equipment and unmanned aerial vehicles will be exhibited at the open demonstration site,” he said.

The exhibition site at the military section of Astana International Airport will consist of 10 pavilions. Three separate pavilions for domestic manufacturers Kazakhstan Engineering, Kazakhstan Paramount Engineering and Kaztechnologies will be complemented by individual pavilions showcasing technology from Turkey, China and Russia. For the first time at KADEX, a unique pavilion dedicated to the space industry will be erected.

“A distinctive innovation of the exhibition will be the international forum, Days of Space in Kazakhstan, the Cyber ​​and Digital Security Conference and the scientific and practical conference Advanced Def Tech. They will be the central dialogue platforms of the exhibition,” Atamkulov explained. At these events, experts from around the world will exchange views on defence and security, the development of the global space industry and cybersecurity threats of present and the future.

The major theme of the exhibition will remain the latest developments of Kazakhstan’s military-industrial complex.

“Kazakhstan Paramount Engineering, one of the flagships of the country’s defence industry, will present the next-generation armoured wheeled vehicles Barys 6×6 and Barys 8×8, as well as Arlan 4×4 and Alan 4×4,” said the minister.

“Our strategy is not limited to producing military and special-purpose products and developing cooperation with domestic defence enterprises. We also aim to increase the competitiveness of our domestic military-industrial complex products on the world arms market,” the minister said.

Atamkulov added that another task for the current year is the launch of remote sensing satellites for scientific and technological purposes. The system consists of two spacecraft and their terrestrial complexes. At present, the satellites are assembled and undergoing their final tests. Their launch is planned for the end of this year with the help of the Falcon-9 launch vehicle.

This year, Kazakhstan’s space agency, Kazcosmos, celebrates its 25th anniversary. The minister noted that since its launch, the fundamentals of a new branch, a science-intensive high-tech space industry that had never existed in Kazakhstan, had been created from the ground up. Over the years, the safety and restoration of the capacities of the world-famous Baikonur cosmodrome was ensured and the available space infrastructure of the country was systematised. Enterprises were established in all strategic areas of development of space activities. Tremendous work was done to train scientific and engineering staff that serve as the backbone of the space industry.

A partnership has been established with the world’s leading space powers, including Russia, France, Germany, the UAE and Saudi Arabia.

“As you may know, we will commission the Baiterek space rocket complex, which will allow Kazakhstan to preserve the prospects of the Baikonur cosmodrome and enter the world market of commercial launches,” said the minister.

Another ambitious project of the ministry is the launch of the Spacecraft Assembly and Testing Complex in Astana. A complete production cycle, from design to assembly and testing of satellites weighing from 100 kilogrammes to 6 tonnes, as well as manufacturing of components for satellites, will be performed at the enterprise. The plant will allow the domestic space industry to enter a new stage of development.

During the exhibition, demonstration performances by the armed forces of Kazakhstan and a demonstration of the military equipment of the Kazakh army will be held. On the same day, a space imaging of the territory of the exhibition by Kazakh remote sensing satellites will be carried out, and the picture made available to the general public through open sources.

In addition to official events, the business programme and the exhibition itself, it is planned to sign 50 memoranda, contracts and agreements in the field of military-technical cooperation with organisations and companies from near and far abroad.

“Literally we will combine theory and practice within the framework of one promising event. This will contribute to the development of partnerships in the field of military-technical cooperation, cybersecurity and joint exploration of outer space for peaceful purposes,” noted Atamkulov.

KADEX 2018 is a platform for a constructive dialogue between business representatives, developers and manufacturers of military products, and specialists from ministries and agencies of different countries, regardless of interstate relations and foreign policy views, the minister said.

“We hope that KADEX 2018 becomes a large-scale event for the enterprises of the national defence industry, space sector and cybersecurity and provides a major boost for their breakthrough on the international arena,” Atamkulov stressed.