By Anuar Abdrakhmanov in Sports on 5 April 2018

ASTANA – Kazakhstan’s Zhalgas Zhumagulov defeated Tyson Nam of the US in the main event of the mixed martial arts tournament MMA Fight Nights Global 86 in Almaty. 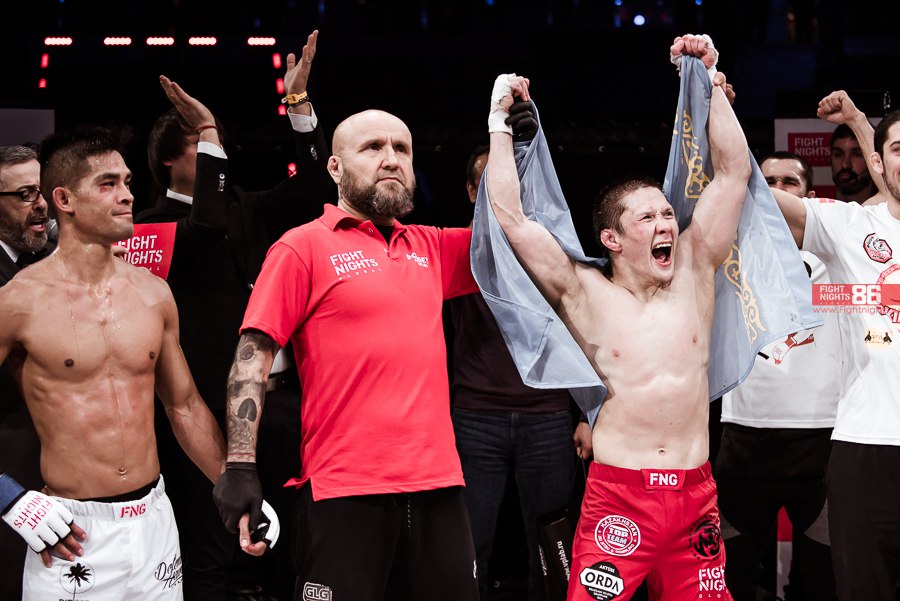 From the first seconds of the fight, Zhumagulov made it clear who was the leader and interrupted his opponent in his own elements, landing a series of accurate punches while standing. The Kazakh fighter also showed his endurance, constantly pressing his opponent. Nam tried to work on standing, but surprisingly did not use kicks. Instead, the American tried to strike the Kazakh in the body from a distance, but met strong counterattacks.

After five rounds, Zhumagulov won by a head. This victory means Zhumagulov can get a title bout for his next fight.

“Today we are witnessing the most significant victory of the Kazakh fighter in the history of Kazakhstan’s MMA. I have been monitoring the development of this sport in Kazakhstan for a long time. There are a lot of good fighters in our country, but defeating such an opponent, whose strength is known to everyone, and when you are not a favourite, can make history. I am sure this is not the last time Kazakhs will witness a historic win,” said head of Fight Nights Global Kamil Gadzhiyev.

“I did everything I worked out in training. Although I could not fight, because I broke my finger two days before the fight. I wanted to fight in a standing position, because everyone heard the opponent’s statement that he was going to knock me out. I’m glad I did not disappoint my country and defended the honour of Kazakhstan. I represented our MMA and proved that Kazakhs are fighters,” said Zhumagulov after the fight.

“It’s great to see that there were few people at the press conference three weeks ago, but today the hall is packed. This shows that we have achieved our goal to attract Kazakhstan’s public to the world of mixed martial arts. A live broadcast of the tournament in social media was watched by 1.9 million people. I want to congratulate Zhalgas and Kazakhstan on their victory. We like to come to Kazakhstan and hold tournaments of this level,” he said.