ASTANA – Kazakh President Nursultan Nazarbayev’s latest visit to the United States, its assessment and outlook were discussed Jan. 26 at the Atlantic Council in Washington, DC. 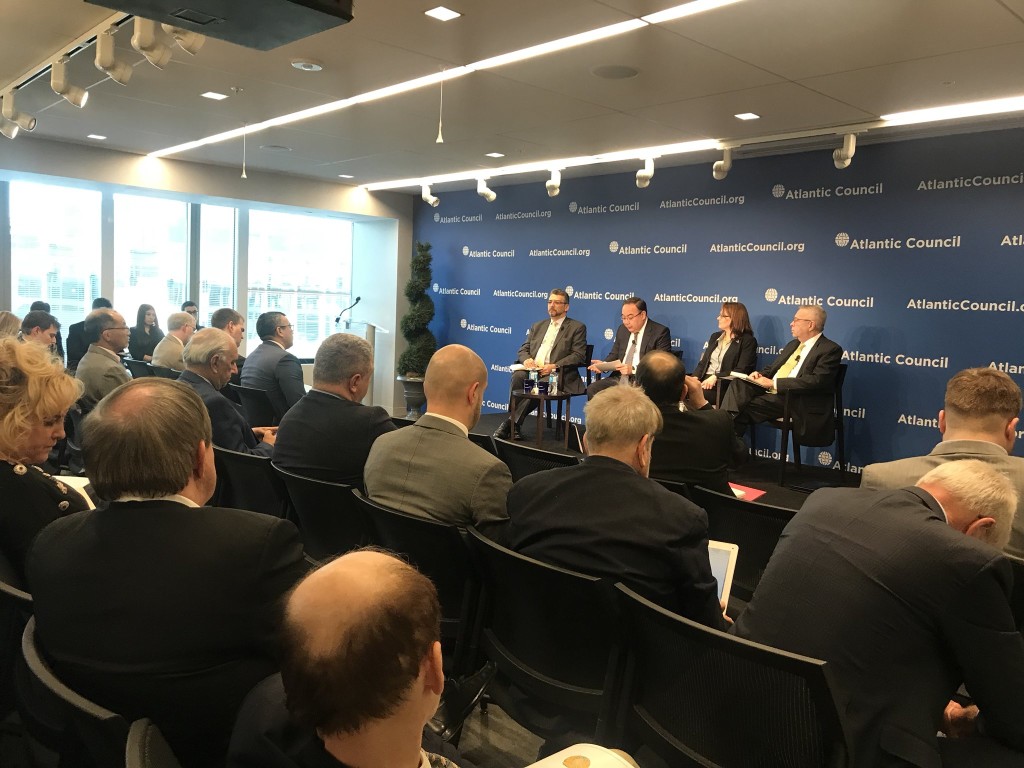 The discussion also included implications for bilateral relations and broader international and regional issues, including Afghanistan and nuclear non-proliferation.

Kazakhstan’s Ambassador to the United States Erzhan Kazykhanov stated that Nazarbayev and U.S. President Donald Trump in their recent meeting reaffirmed the independence, territorial integrity and sovereignty of Kazakhstan as well as its role in advancing global peace and prosperity.

“These meetings have also reaffirmed our country’s commitment to fostering our cooperation in many areas of mutual interest, such as global politics and regional integration, defence and security, trade and investment, strategic energy dialogue, cultural and humanitarian links, people-to-people relations, et cetera,” he said, adding that the adoption of the document entitled “United States and Kazakhstan: an Enhanced Strategic Partnership in the 21st Century” not only outlines the goals and priorities of bilateral cooperation but sets a long-term vision to advance global peace and prosperity.

“As noted in the course of bilateral discussions at the White House and Naval Observatory [which serves as the official residence of the U.S. Vice President], Kazakhstan remains strongly committed to the promotion of global peace and stability as an elected member of the UN Security Council and I would like to mention that Jan. 18 President Nazarbayev presided over the Security Council meeting at the UN headquarters that was devoted to the issues related to non-proliferation and confidence-building measures,” he said. “In this context, we will continue to champion the cause of nuclear non-proliferation and work closely with the United States to encourage greater cooperation to address shared challenges in Central Asia through regional formats such as C5+1 dialogue; combine our efforts to rebuild Afghanistan, including through empowerment of Afghani women; fight against terrorism and extremism and, if necessary, provide our platform for peaceful talks to address topical issues.”

The ambassador also mentioned agreements signed during Nazarbayev’s visit between large U.S. and Kazakh companies worth more than $7 billion, including $2.5 billion aimed at the purchase of U.S products.

“Overall, I would say that this visit exemplified that there is indeed a vast potential to strengthen and enhance our strategic partnership. Both sides are now actively working to follow up on agreements reached and look forward to more cooperation in the future,” he added.

“I think this visit was important because President Nazarbayev represented not only Kazakhstan but he represented Central Asia as a region and one of the important developments that are taking place in the region is that we want to increase our integration and our economic cooperation,” said Kazykhanov while mentioning issues on which the two countries can cooperate.

He said that, unfortunately, the inter-regional trade in Central Asia makes up only 8 percent for the five countries.

“So we need to increase it dramatically and we see that the United States can help us in strengthening integration in Central Asia. Last year, the presidents of Kazakhstan and Uzbekistan agreed to increase the trade turnover between two countries from two billion to five billion dollars in two years,” he explained.

“Kazakhstan and other countries of Central Asia wholeheartedly support the new South Asia strategy of the United States and we are committed to working hand-in-hand with our U.S. partners in stabilising the situation in Afghanistan and we are proving that by making concrete steps. The visit of eleven permanent representatives of the Security Council members to Kabul was a vivid example of Kazakhstan’s leadership in bringing Afghanistan problem oto the radars of the Security Council,” said the Kazakh ambassador.

“Kazakhstan has been a leader in promoting dialogue and working for peaceful solutions to complex disputes around the world, and this leadership was on full display during its successful presidency of the UN Security Council this month. Kazakhstan focused on critical issues like global nuclear non-proliferation and the conflict in Afghanistan. During its presidency, Kazakhstan also proposed and organised a UN Security Council visit to Afghanistan,” said Deputy Assistant to the U.S. President and Senior Director for South and Central Asia at the National Security Council Lisa Curtis.

“President Nazarbayev’s visit to Washington also underscored Kazakh support for our South Asia strategy. Kazakhstan is sharing in the burden in Afghanistan, it’s contributing to the Afghan security forces, training Afghan civilian specialists and it’s even considering participation in some important infrastructure projects,” she said, adding that Kazakhstan is concerned about growing violence in northern Afghanistan and the emergence of ISIS fighters in the eastern and some northern parts of the country.

Curtis said she believes the meeting of two leaders provided the opportunity for the United States to demonstrate its “on-going commitment to Kazakhstan’s independence, sovereignty, its territorial integrity – something the United States has done over the last 26 years.”

“And I think the meeting sent a clear signal that the United States is steadfast in its engagement in Central Asia. We want to be present in this increasingly important region, which sits at the crossroads of Europe and Asia. This region is important to core U.S. national security interests – protecting American people, promoting American prosperity and advancing American influence,” she added.

According to her, Nazarbayev and Trump committed to enhancing the strategic partnership and strengthening security, economic and cultural ties between the two countries.

Another panellist, former U.S. Ambassador to Kazakhstan Richard Hoagland said Kazakhstan has long worked to position itself on the world stage and noted the importance of a recent Kazakhstan-sponsored visit to Kabul.

“From the beginning, as we all know, it took the initiative in nuclear non-proliferation; it seriously undertook economic reform, which is now paying off handsomely. In 2010, when it held the chairmanship of the Organisation for Security and Cooperation in Europe, it hosted the first OSCE summit in many years and then more recently it positioned itself to host negotiations on Syria. Again, a bit under the radar, but it shows the respect that Kazakhstan has among many opposing countries in the world. And then, of course, most recently it assumed temporary presidency of the UN Security Council and under the leadership of Kazakhstan’s permanent representative, Ambassador Kairat Umarov it sponsored that remarkable visit to Kabul for Security Council representatives that got a little bit of reporting. But I think it was a real breakthrough and it was highly creative, it was an important thing to do, because all of you involved in diplomacy and foreign policy know that you can read and read and read, but until you get on the ground and meet people and see places you really don’t understand as well as you should,” he said.

Senior Fellow at Eurasia Centre of the Atlantic Council Dr. Ariel Cohen, who moderated the event, said Kazakhstan, since its independence, has been a model in many senses.

“It was a model of disarmament and non-proliferation policy. It inherited a huge Soviet military nuclear arsenal… And Kazakhstan, as well as Ukraine led and showed the way of how a country can get rid of these horrible weapons of war and attract foreign investment, technical assistance and really sky rocket on the path of modernisation. Kazakhstan is a model in other things. In the aspect of being the economic engine of Central Asia in terms of development, education, in terms of being a model of a majority Muslim country that is secular essentially and does not oppress religious practice but at the same time does not allow this or other way of extremism to dictate policies of the country. And, finally, Kazakhstan is very active internationally,” he said.

“A newly independent country that gained independence only twenty five years ago, that unlike the Baltic states or some other countries did not have a previous iteration of independence, started from scratch, became a country chairman of the OSCE, became chairman of the Organisation of Islamic Cooperation. And it is on its way to become eventually a member of (the Organisation for Economic Cooperation and Development) OECD and now is a non-permanent member of the Security Council and this month chairs the Security Council,” said Cohen.