ASTANA – Kazakh President Nursultan Nazarbayev recently congratulated Serikbay kazhy Oraz on his election as the nation’s Supreme Mufti, the highest official of the Spiritual Administration of Muslims of Kazakhstan. 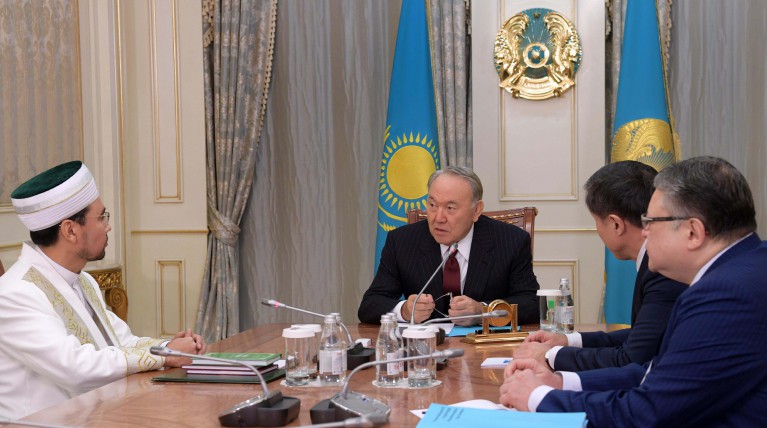 “I invited you on the eve of Independence Day in order to congratulate you on your election to such a high post. Thanks to our independence, we were given the opportunity to revive our traditions and profess the religion of our ancestors. The state has done everything to provide every citizen with freedom of religion,” he said.

Nazarbayev noted the Supreme Mufti’s special role in regulating relations with the Ministry for Religious Affairs and Civil Society.

“Kazakhstan is a secular state. The Ministry was not created for the purpose of any restriction of religion. The Ministry is called upon to ensure order in the religious sphere so that believers do not violate each other’s rights,” he added.

The head of state spoke about the need for joint work to explain and communicate the main provisions of the upcoming draft law on religious activities to the public. The two men have also talked about religious education issues.

The President recalled the April meeting with representatives of the SAMK, where they discussed the need to modernise the country’s consciousness and preserve its historical and spiritual wealth.

“Patriotism, love of the motherland and stability within the country and in the region is the guarantee of our future. For this, we must work together,” said the President.

Nazarbayev underlined the traditional character of the Hanafi madhhab (school) for Kazakh Muslims and noted the need to clarify the foundations of this particular Islamic movement.

“We have young people among believers; there are those going to mosques in the fashion trend, there are believers that are cropping pants and growing beards. There is a need to correctly explain the foundations of Islam to all of them,” he said.

The head of state also stressed the need for individual explanatory work with followers of radical religious movements.

“We need to attract qualified imams who know the Qu’ran and hadith (collection of traditional sayings) to explain the provisions of the traditional Hanafi madhhab and its difference from destructive currents,” he noted.

The President emphasised the importance of not only developing social support sponsorship for those in need, but also scientific research, conferences and advocacy.

Oraz thanked Nazarbayev for his reception.

“The Spiritual Administration of Muslims faces a big task to revive the historically-established traditional religious school,” he said.

“In your article ‘Course towards the Future,’ you talked about the need to follow new trends and changes in the surrounding world. Today, our imams study new literature and apply this knowledge in conducting sermons and services,” he added.

The Supreme Mufti noted the appointment, an unexpected decision for him, carries great responsibility. He plans to achieve all the tasks for the next five years.

“We also intend to do a thorough job of explaining the meanings of the Qu’ran and religion in general. There is a need to prevent the influence of radical currents in the state. The immunity of our society in this sense is very strong and we have enough knowledge about the Muslim world,” he said.