ASTANA – As part of the Believe in the Dream! Project, the Kazpravda.kz online edition team gave Anatoly “Tolik” Oleinik, a boy living in an Astana orphanage, a chance to move one step closer to his cherished dream of becoming an astronaut. An excursion to the National Space Centre was organised for Tolik, where he tried on gloves from a spacesuit, explored a descent vehicle, saw images of Earth from space and made friends with Kazakh cosmonaut Aidyn Aimbetov. 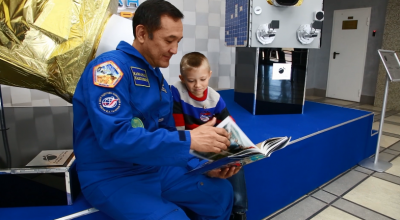 Tolik lives in a capital city orphanage with his older sister, Irina, who has already benefited from the same project, becoming a chef and baker for a day.

On the way to his destination, Tolik was told that he was being taken to the heart of Kazakhstan’s space industry, the National Space Centre. A surprise was waiting for Tolik there: cosmonaut, Major General of the Air Forces of Kazakhstan and Kazakhstan Garysh Sapary Vice President Aidyn Aimbetov. Aimbetov personally took the boy on a tour of the centre and told him what to do to become a cosmonaut. Having met Aiymbetov, who flew to space in September 2015, earning the honorary title of the People’s Hero of Kazakhstan, Tolik was over the moon.

After the meeting, the cosmonaut took the boy to the museum, where he showed him his own spacesuit from two years ago. Aimbetov even allowed the boy to try on some of the equipment.

As Tolik put on the gloves of a real cosmonaut, Aimbetov told him trivia about space. “Cosmonauts put on spacesuits through a special hole in the suits. In addition, all suits come in a standard size; to adjust it to a cosmonaut it is specially regulated. Also, a person can grow by about five centimetres in space, this is because in a vacuum there is no force of gravitation and the spine becomes straight, so you can still grow up when you go into space,” he told the young dreamer.

At first, Tolik was very reserved; too shy to speak, he just listened to Aimbetov’s space stories. Still, the cosmonaut and the boy did not miss the opportunity to make memorable photos.

“Most importantly, Anatoly, take care of your health, do sports, no matter what – you can run, swim, do everything you like. You need to eat well, do not have bad habits, do not smoke or drink alcohol! Most importantly, you must study hard. Quite possibly, you will take the first expedition to Mars,” Aimbetov said.

After a tour of the museum, Tolik and Aimbetov went to the Earth remote sensing centre. Tolik was very surprised when he learned that the planet can be observed from space.

Shortly before arriving at the National Space Centre, the capsule in which Aimbetov descended to Earth was brought from Russia. During their visit, the cosmonaut decided to show the boy how it looks. Tolik became the first child to see it. The descent module impressed the boy: he looked through the porthole with great curiosity, trying to see how it was built inside.

When the tour came to an end, the modest Tolik and Aimbetov had become such good friends that he did not want to leave the National Space Centre and even began to have fun.

“Well, Anatoly, now we will be good friends! I wish you good luck!” the cosmonaut told the boy.

Aimbetov gave the young dreamer a model satellite building set; a book about Kazakhstan’s first cosmonaut, Tokhtar Aubakirov; and an autographed picture of the two of them together.

“Thank you for such happiness, everything was cool, I liked everything! Now I am sure I will become a real cosmonaut!” Tolik exclaimed.

Having taken a step toward his dream, the project team believes that before too long, the whole country will know the name of Anatoly Oleinik, cosmonaut.