Aktau – city by the sea

By Frol Leandoer in Tourism on 9 November 2017 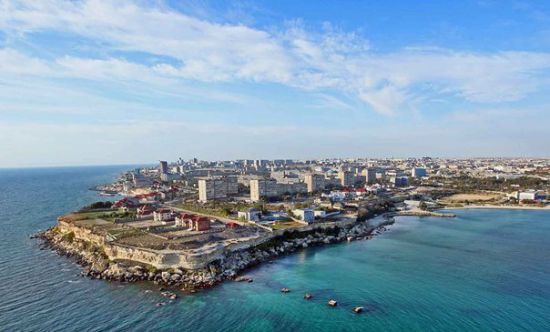 Known as Aktau from 1961-1963, the name was changed to Shevchenko in honour of Ukrainian poet Taras Shevchenko, who was in exile in Kazakhstan in the mid-19th century. The industrial city returned to its former designation on Sept. 13, 1991.

The decision to use Aktau as a host for an atomic power plant was made by Soviet leadership in the early 1950s with the participation of the famous Ministry of Medium Machine Building and the leadership of then-Minister Yefim Slavsky. According to this plan, Aktau was indeed home to a BN-350 nuclear reactor in 1973-1992, when it was decommissioned.

The city itself was built from scratch – completely scaled according to the master plan developed by the Leningrad Design Institute, which developed the nation’s new cities.

Aktau does not have natural sources of drinking water and is completely provided with purified sea water. The infrastructure provided decent living for people in a waterless desert.

Since the collapse of the Soviet Union, Aktau has largely become a centre of oil and gas fields opened in the 20th century and those discovered more recently.

Most people fly to Aktau Airport, located 23 kilometres from the city centre. Air Astana and SCAT Airlines offer flights from Aktobe, Almaty, Atyrau and the capital. Due to the taxi situation, it is best to prearrange ground transport to the city.

Aktau does not have a railway station. Visitors arrive at Mangyshlak Station, 20 kilometres from the city, then take shuttle bus number 105 or a taxi.

The city’s embankments and beaches have recently undergone significant improvements. The beach season lasts from late May to late August, when the water temperature averages +18°C. Tourists typically stay near Aktau’s many modern recreation centres and beaches during the summer, as the sea is cold the remainder of the year.

Aktau is truly a city where the streets have no names, for it is divided into numbered micro-districts.

The city offers puppet and music-drama theatres, cinemas and night life featuring many clubs and cafes.

Aktau Open Fest has been held annually since 2012. The three-day event, usually on the beach in late August, features songs performed by some of the most popular Commonwealth of Independent States (CIS) singers.

The city has a lighthouse in the fourth micro-district which has been working for more than 40 years. It became famous as the first lighthouse built on the roof of a residential building. The city also has a Soviet-era plane on a pedestal.

The city has a fairly large selection of hotels. One of the first accommodations, the Aktau Hotel, turned 50 in 2016.