ASTANA – Eddie Maier, deputy head of unit at the European Commission Directorate-General for International Cooperation and Development’s Instrument for Stability and Nuclear Safety, discussed nuclear safety and the regional projects and activities of the International Science and Technology Centre (ISTC) in Central Asia in a recent interview with The Astana Times. 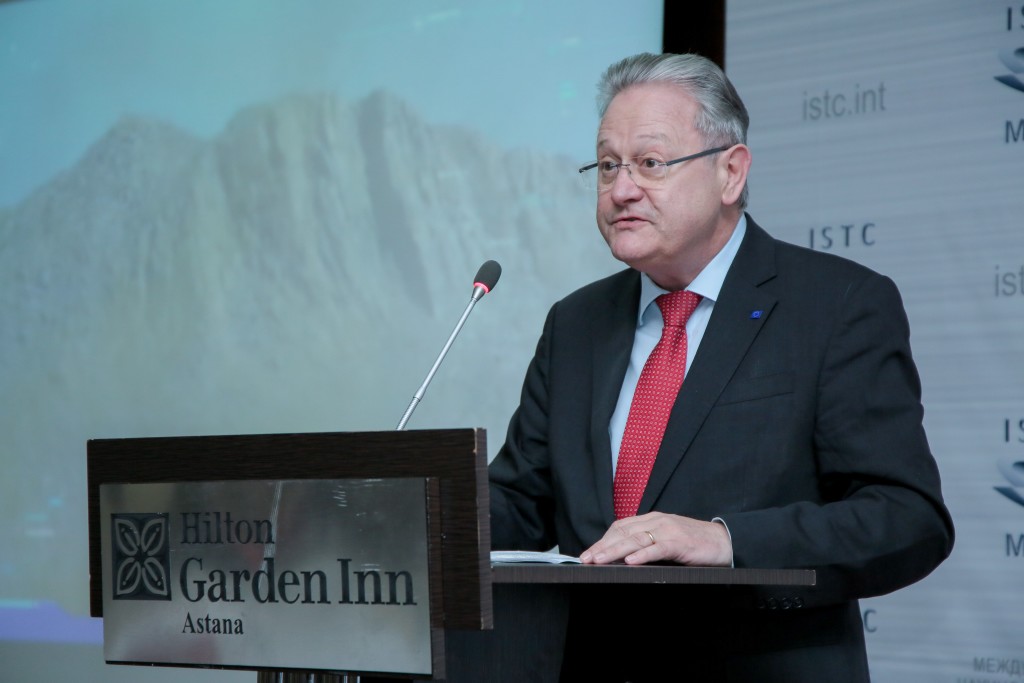 Representing the union at the ISTC Governing Board, Maier visits Astana twice a year for board meetings to discuss the centre’s activities, address problems and seek new solutions with researchers and colleagues from ISTC partner countries Armenia, Georgia, Japan, Kazakhstan, South Korea, Kyrgyzstan, Norway, Tajikistan, the EU and the U.S.

Maier was visiting Astana to take part in the Oct. 12 international seminar organised by the ISTC and bringing expertise from ISTC partner countries and beyond to share ideas and suggest solutions in the increasingly important field of dual use goods strategic trade control. The seminar also marked the launch of the second project on dual use goods export control funded by the EU and implemented by the ISTC.

Established in 1994, the ISTC works to set up and strengthen cooperation and partnership between researchers and scientists from the ISTC member states working to promote peaceful science and technology activities, particularly in the areas of nuclear non-proliferation and weapons of mass destruction.

The centre and its partner countries, including the EU, has funded 2,838 projects so far worth more than $888.9 million between 1994 and 2016, with 207 projects worth more than $76 million specifically in Kazakhstan.

The centre moved to the Kazakh capital in 2015 at the invitation of the Kazakh government and is now based at Nazarbayev University.

“When we arrived from Moscow [to Astana], we decided to modernise and adapt the ISTC to the 21st century, because it was created in 1994 after the collapse of the Soviet Union,” Maier explained.

The board revised the centre’s basic documents, he added, noting the changes in the centre’s objectives as well.

“We have changed the objectives. It remains security oriented, but now in a broader sense. It deals not only with reoccupation and redirection of scientists who work in weapons of mass destruction field, but more generally scientists and institutions working in the security field,” he said.

The relevant changes result in a wider scope among ISTC projects, according to Maier, implying “more people, more expenses, but greater impact.”

“The second big change is that we decided not to relate activities to a region – for instance, the former Soviet Union – but leave it open worldwide. ISTC can act in Syria, Iran, North Korea if needed, and ISTC is currently acting in Africa,” said Maier.

Kazakhstan, in this context, is a “strategic place to have a good view on a large neighbourhood,” he added.

To that objective, instruments are essential, as they serve as a “kind of agreement between major countries in the security domain,” according to Maier, helping increase the effectiveness of the activities and improving the ability to react quickly, an important factor amidst the rising activities of non-state actors.

He also noted the EU’s contribution to the ISTC and its activities in the Central Asian region, activities that saw nearly 1.5-3 million euros transferred every year to the centre.

“In addition, we allocated around 15 million euros over the last three years for specific large scale projects,” said Maier.

Among these key projects in the region is Project 53, a biosafety and biosecurity project in Central Asia worth 6.5 million euros. The project is developed under the EU CBRN risk mitigation Centres of Excellence initiative and involves 59 countries in eight regions with the centre’s Central Asian office located in Uzbekistan. It seeks to assist the Central Asian countries in improving their biosafety and biosecurity legal framework in compliance with international standards and regulations.

The second project on dual use goods strategic trade control that was unveiled as part of the Oct. 12 seminar in Astana follows the previous EU P2P project, which, unlike the second one, involved only Kazakhstan and Jordan.

“Kazakhstan and Jordan are one of the examples of novelty in our actions,” said Maier, adding that the project plan did not envision changes in law enforcement and licensing, the areas of a great importance for export control mechanisms to become truly efficient.

“We had impression that this was not sufficient. You have to do more,” he said, explaining the motives behind the launch of the second project.

Other projects are being implemented in water protection and uranium mining that, among other objectives, envision bringing the expertise to conduct training and capacity building activities.

Speaking about the EU contribution to nuclear safety field worldwide, Maier noted the EU was also among the major donors to the International Atomic Energy Agency (IAEA) and its low-enriched uranium bank that was recently unveiled in Ust-Kamenogorsk in eastern Kazakhstan.

“We try to export the EU culture in terms of nuclear safety. EU standards are more strict and demanding than the IAEA, for several reasons,” said Maier. “We try to promote our standards to improve the IAEA standards and improve nuclear safety around the world.”

“Kazakhstan is very much involved and we do not have to invest much, because it is well equipped,” he added, emphasising the contrasting poor capacity and equipment in other countries, including African ones.

But there is always a room for improvement, noted Maier. “Even in a nuclear domain where your country is a fantastic promoter – as is your president – in nuclear non-proliferation and a nuclear-weapons-free world.” He added that the message of Kazakhstan will also be important when it chairs the United Nations Security Council next year.