ASTANA – The Astana city government recently announced a custom architectural town planning contest for the development of a sketch idea for the Oriental City facility. The facility will be located on a 36-hectare island in the central part of the capital near the Sary Arka bridge, Yelorda Info reported. 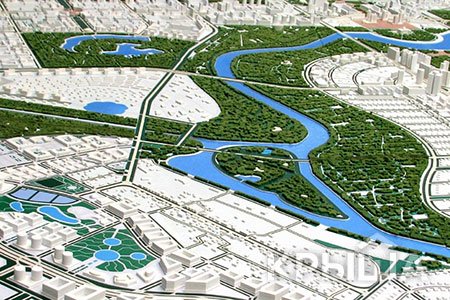 The terms of the contest require proposed designs of Oriental City to include a multifunctional centre, offices, a shopping mall, an exhibition pavilion, the Koshpendiler (Nomads) museum, craft workshops, a theatre, cinema, cafes, restaurants, hotels, a mosque, a square and the Mound of Wishes. The Oriental City should be decorated with fountains and sculptural compositions. The design should also include cycling bridges, bicycle paths, a pier, and car parks.

The central object will be the Mound of Wishes, which will revive the ancient tradition of nomads, but in a new context. In ancient times, warriors erected the Oba mounds, which served as beacons and warned of the approach of foreign troops. The modern Akniyet Oba mound will become a place of good wishes. Tourist will be able to take any stone and order an engraving with a wish in the workshop, then take it to the mound.

According to the client, the mound is expected to be the most visited place of the Oriental City and will constantly grow.

The winner of the contest for the best sketch of the Oriental City will receive 16.36 million tenge (USD $49,047). Applications will be accepted until Oct. 29. The results of the competition will be announced in April.