France to present cutting edge technologies and culture at EXPO 2017

ASTANA – France will present a futuristic electric Peugeot, the sculpture of Milena Hermon and Marianne, the symbol of the French Republic, at EXPO 2017, according to pavilion general commissioner Pascal Loro. 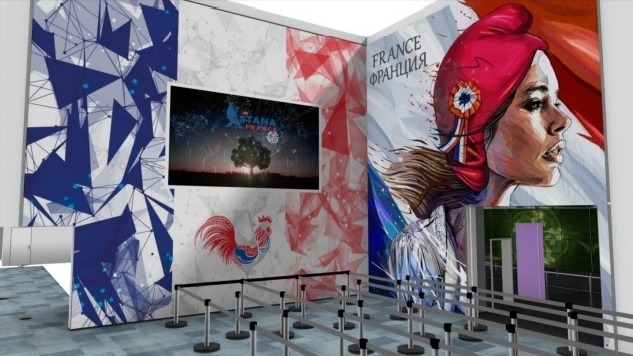 “We were one of the first countries in the European Union that signed a strategic partnership agreement [with Kazakhstan] many years ago. Our country has always actively supported Kazakhstan. The theme chosen by Kazakhstan for this exhibition is the same as the priorities that we support in our country,” he said.

“Renewable energy sources, eco-city and eco-transport are the three main themes of our pavilion. Each partner will have a dedicated zone to demonstrate their interactive elements with tactile screens and recent developments. There will be a separate section dedicated to all kinds of future transport, from electric scooters to electric cars. The main exhibit will be a completely new project of Peugeot – an electric car with a futuristic design that can be especially appealing to children,” he added.

France will also demonstrate its rich spiritual background and cultural traditions, as visitors will see the works of French artists. Herman’s Mini Aqua, Marianne, by artist-illustrator Ian Dalon, and photos of the most picturesque corners of country will be on display.

As the nation that received the right to choose its location on the EXPO 2017 grounds, France became the owner of one of the largest pavilions at the exhibition. The two-storey building will demonstrate enterprises with the most advanced achievements in the field of future technologies on the first floor, while the upper level will be devoted to areas for seminars, symposia or debates. The pavilion, with a façade decorated with landscapes from various portions of the nation, can accommodate more than 200 visitors.

“Seven sections of the first floor connected by galleries will show green energy technologies. The outstanding figures of France who contributed to the development of world civilisation will be represented in these galleries,” said Loro.

The French pavilion will celebrate two national holidays – World Music Day (Fête de la Musique) on June 21 and Bastille Day on July 14, both observed during the international exhibition. Guests on World Music Day will enjoy the traditional circus rooms and cabaret as well as listen to music of southwest France and Brittany.

Pavilion partners include well-known French companies and organisations like Peugeot, Saint-Gobain, Agency for Environment and Energy Management (ADEME), Syctom, Total, Veolia, Vicat and Itar. They aim to draw the attention of the international community to the process of climate change and the use of efficient models of energy consumption.