By Zhanna Shayakhmetova in International on 16 March 2017

ASTANA – Russia, Iran and Turkey reaffirmed their commitment to consolidating and strengthening the ceasefire regime in Syria during a fresh round of peace talks March 14-15 in Astana. It was the third such meeting in Astana in what has become known as the Astana Process. 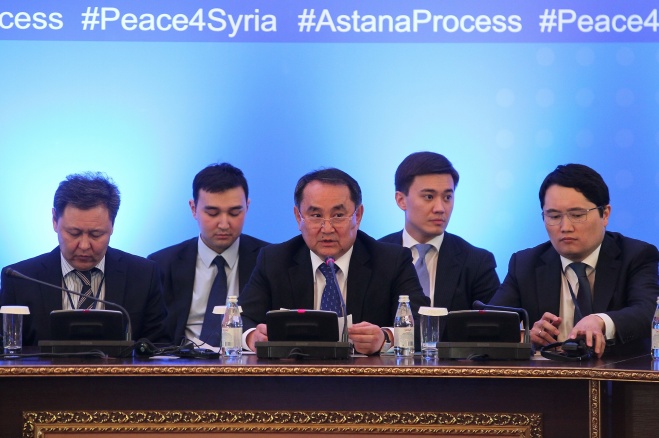 The delegations welcomed Iran’s statement to become the third guarantor state and the resumption of Geneva talks, which were facilitated by the progress in the cessation of hostilities in Syria thanks to the ceasefire regime in force since Dec. 30, 2016 and the creation of a trilateral ceasefire mechanism.

Kazakh Deputy Foreign Minister Akylbek Kamaldinov said the previous rounds of talks resulted in measures to help in achieving a political solution to the Syrian crisis and end hostilities on the ground.

“Astana 1 resulted in a Moscow-Tehran-Ankara agreement on the establishment of a trilateral mechanism to monitor the ceasefire in Syria. Astana 2 resulted in an agreement to set up a ceasefire monitoring group, encompassing Iran, Russia and Turkey, that would report to the UN, as well as the draft provision on the exchange of detained persons. The draft provision on areas that have joined the ceasefire regime were studied and we can be heartened with what we have achieved despite the uphill task and the uncertainties ahead. These achievements demonstrate that there is real value to the Astana Process,” he said at the conclusion of the talks.

Kamaldinov said the Astana Process proved to be effective and viable.

“Though there were no real breakthroughs, what is important is that the ceasefire is still holding and the Geneva meetings are taking place without overt hostilities or derailment of the talks. It is too early to predict the final solution of any peace process, and more so in the case of the Syrian situation. The way is still long and full of hurdles. However, it is only our unity that will help fight terrorism and violent extremism,” he noted.

“Kazakhstan remains a neutral and objective mediator in this conflict,” Kamaldinov continued. “Astana continues to be a suitable location for the ongoing talks on Syria. We are determined to ensure that the talks in Astana contribute towards bringing permanent peace to Syria and the region. Kazakhstan will continue to actively contribute to this goal.”

In a press briefing following the end of talks, head of the Russian delegation and Special Envoy of the Russian President on Syrian settlement Alexander Lavrentiev said the level of violence in the zones of the regime significantly decreased despite existing violations of the cessation of hostilities regime.

“We still hope that Syrian armed opposition will change their position despite the absence of the delegation at the talks in Astana. According to the latest information, they intend to come to Astana tomorrow morning,” he said.

According to Lavrentiev, the draft provision on constitutional commission ensuring the participation of the population in the drafting of a new Syrian Constitution and giving impetus to the consideration of the entire complex of tasks for a political settlement in Syria under the auspices of the UN in Geneva was also discussed.

The negotiations between the guarantor states and the Syrian armed opposition delegation in Astana must be continued as mutual dialogue is needed to solve existing problems, he concluded.

The Syrian Arab Republic’s delegation headed by the country’s Permanent Representative to the UN Bashar Al-Jaafari thanked Kazakhstan for hosting the negotiations.

“Our delegation is ready to discuss all the issues that can contribute to stopping the bloodshed in Syria and put an end to the terrorism that has swept our country today. We are still making great efforts for these talks to be successful in order to achieve the desired agreements,” Al-Jaafari said.

Al-Jaafari hadn’t confirmed that the Syrian delegation discussed the constitutional commission, saying that they had discussed with Russia the document related to demining Palmira.

At the talks in Astana, the delegations also exchanged information on reports on ceasefire violations and stressed the need to reduce the violations through increasing the efficiency of the trilateral monitoring mechanism. The delegations also discussed the provisions about districts that joined the regime of the cessation of hostilities, exchange of information on prisoners, ensuring the delineation between groups of armed opposition and terrorist organisations. International assistance for demining of the UNESCO cultural heritage sites in Syria, confidence-building measures and other topics concerning Syria were also discussed.