By Ainur Kuramyssova in Business on 25 June 2016

ASTANA – The Parliament of Kazakhstan has recommended changing the Business Road Map 2020 programme to exclude subsidies for business entities engaged in the non-manufacturing sector, including wholesale and retail trade, real estate, and accommodation management in the recreation and entertainment sector, reported the press service of the Mazhilis, the lower chamber of Kazakhstan’s Parliament. 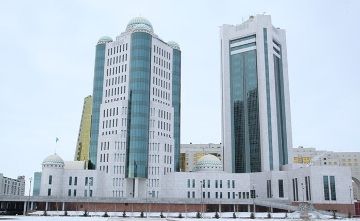 During the June 17 joint session of both chambers, chaired by the then Speaker of the Mazhilis Baktykozha Izmukhambetov, Parliament approved the governmental report on state budget implementation for 2015. In particular, revenues were 5.9 trillion tenge (US$17.6 billion) and expenditures totalled 6.47 tillion tenge (US$19.3 million).

A thorough review of target indicators and other indicators in all planning documents concerning the state planning system, in order to reflect outcomes and efficiency, was among other recommendations. Other suggestions covered creating measures to reduce the public debt, the level of external borrowing and debt in the quasi-public sector.

According to the report, the government should take steps to enhance the tax administration’s efficiency to prevent future budget losses and provide mechanisms for the early detection of tax evasion and fictional companies. It was also stated that the government should provide preventive measures for cashing in funds and stimulate cashless transactions.

The document, adopted by both chambers, also considers issues in the development of a system for assessing the efficiency of the quasi-public sector. It is expected that special regulations will be developed to control state financing rates of the real economy through quasi-public sector entities and second level banks.