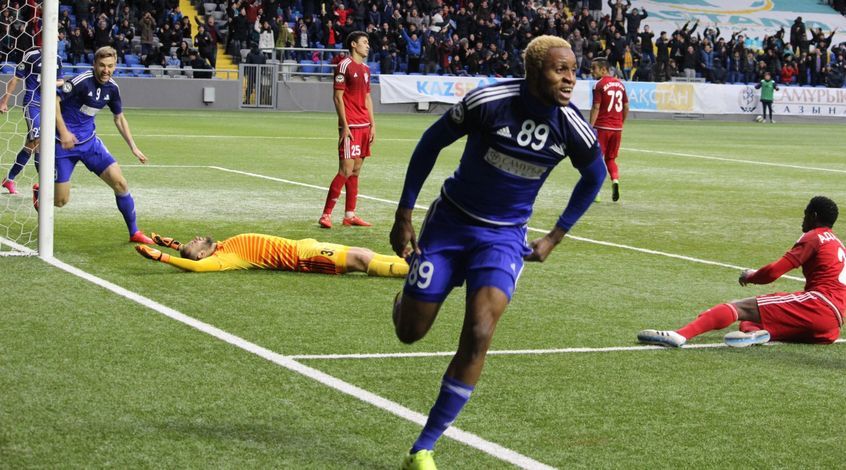 Junior Kabananga celebrates an Astana goal during their victory over Aktobe Nov. 8.

FC Astana bombarded Aktobe with attacks from the first minutes of the game in front of the 8,200-person home crowd in a one-sided match, but managed to get only one past Aktobe goal keeper Stanislav Pavlov.

In the 13th minute, Pavlov saved his team twice after 25-year-old striker Bauyrzhan Dzholchiyev attempted to take his goal with a header and Branko Ilić tried to break the tie off the initial rebound.
Numerous attempts were not successful as Astana players continued attacks but kept failing due to a lack of communication – a few seconds too slow, a few metres too wide, finishing off the target or stopped by Pavlov, who was on top of his game. The first half ended in a scoreless tie.

The second half started in the same fashion. In the 50th minute, Astana Captain Tanat Nusserbayev’s header was easily stopped by Pavlov. In the 55th minute, Pavlov once again scooped out a tough header right from under the woodwork and won the ovations of the opposing team’s crowd as Astana’s Marin Aničić was robbed of a goal and the 0:0 deadlock remained to be broken.

Pavlov’s mission was far from over but he’d already established himself as the man of the night as he made tough saves one after another, stopping Dmitry Shomko’s attempt in the 73rd minute and, in the 79th minute, rejecting substitute Junior Kabananga.

In the last minutes of the match, in the 87th, when Astana fans were exhausted by false promises of a coveted goal, but still hoped to celebrate a win, Kabananga lifted his team above Aktobe after speeding into the box and redirecting Serikzhan Muzhikov’s ball past Pavlov.

The struggle was over, the visiting team had a few attempts at counterattacks but the better team, FC Astana, that night got what they deserved.