NEW YORK – In numerous multilateral meetings that Kazakh Foreign Minister Erlan Idrissov attended in New York as part of the 70th United Nations General Assembly he sought to promote a regional approach to regional security and other challenges. 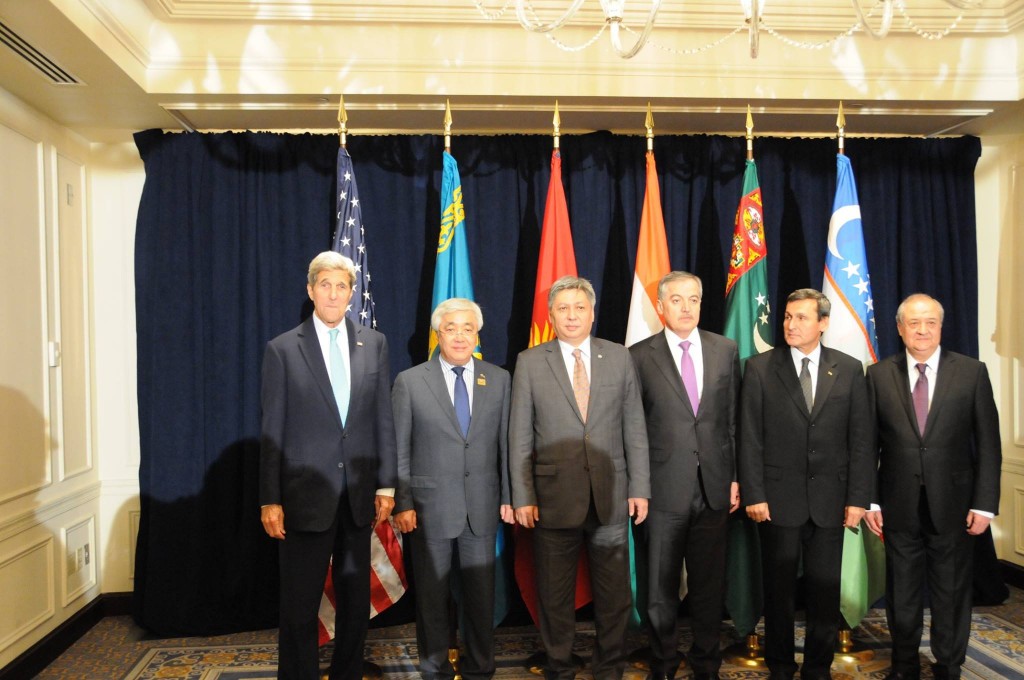 From left, U.S. Secretary of State John Kerry, Foreign Minister of Kazakhstan Erlan Idrissov and the foreign minister of Kyrgyzstan, Tajikistan, Turkmenistan and Uzbekistan at the C5+1 discussion.

On Sept. 26, Idrissov spoke at the meeting on “Afghanistan’s Peaceful Reconstruction and Regional Cooperation” that was organised on the sidelines of the assembly.

Participants of the meeting included, among others, Afghan Chief Executive Abdullah Abdullah, Turkish Deputy Prime Minister Cevdet Yilmaz and the foreign ministers of Australia, Iran, Italy and Norway and the EU High Representative for Foreign Affairs and Security Policy.

Addressing the gathering, Idrissov said Afghanistan has been one of the major challenging international issues for the last decades. According to him, the rehabilitation of Afghanistan is vital to ensuring peace, stability and sustainable economic and social development not only for Kazakhstan, but for the entire region. 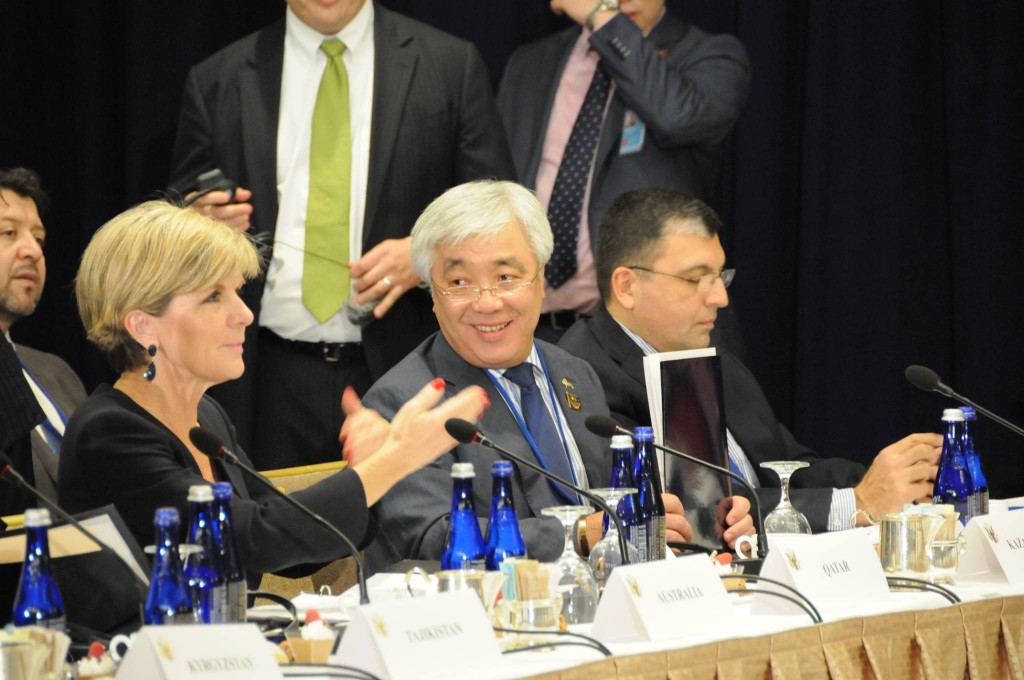 “In light of the reported emergence of Daesh in Afghanistan and a crisis within the Taliban, we urge the world community to redouble efforts to be proactive in supporting the Afghan Government of National Unity as well as the Afghan National Security Forces,” he said.

Idrissov emphasised that on a bilateral level, the Kazakh government regularly provides Afghanistan with humanitarian aid and technical assistance.

“In 2009, we launched a five-year scholarship programme for 1,000 Afghan young people to study medicine, engineering and public administration at Kazakh universities. This year we have extended the programme. By doing this, we highlight that investing in human capital and local capacity building is one of the most feasible ways to rehabilitate Afghanistan. We invite other parties to follow our example,” he said.

Idrissov noted that Kazakhstan is doing its best to support international efforts to stabilise Afghanistan. 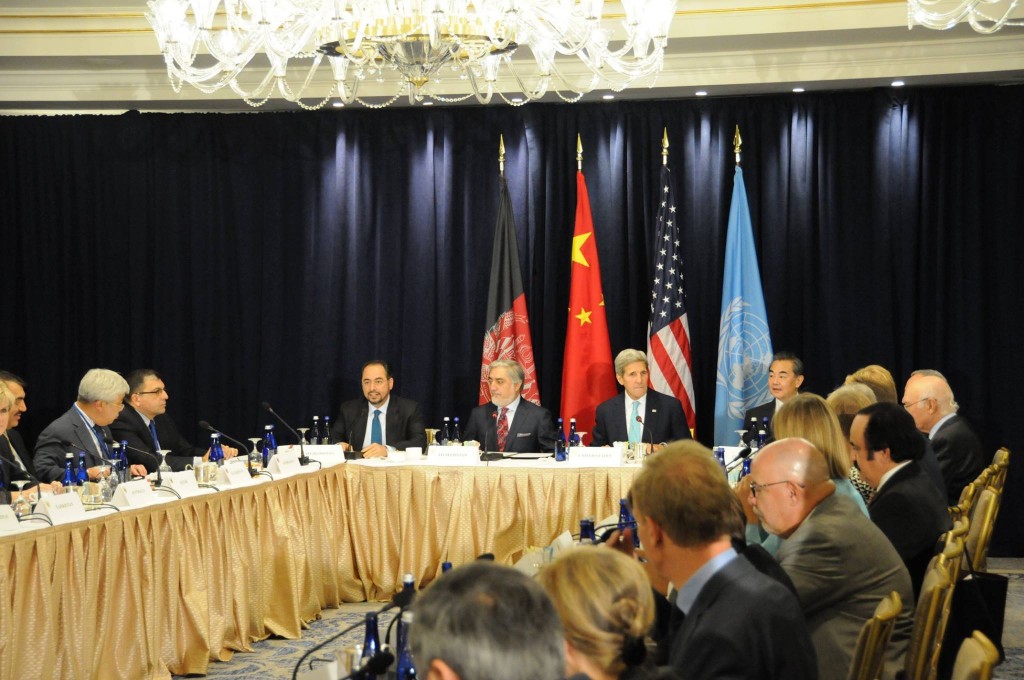 “Kazakhstan is committed to promoting greater South-South cooperation both in Central Asia and far beyond. We stand ready to share with other developing nations the solutions that have successfully worked for us. Despite being the largest landlocked country in the world, Kazakhstan has amassed immense experience in achieving dynamic economic growth, resulting in remarkable structural transformation. We have reached all but one of our Millennium Development Goals (MDGs) and moved from being a regular recipient of aid to becoming a donor country,” said Idrissov.

The Kazakh foreign minister also noted that in the last several years, Kazakhstan has donated more than $100 million to developing countries. In 2014, particularly, substantial humanitarian aid was provided, bilaterally and multilaterally, to Asia, Africa and the Caribbean.

“We are also looking for the possibility to assist countries in special situations to reach their goals outlined in the main outcomes of international and UN conferences on renewable energy within the framework of EXPO 2017,” Idrissov said.

According to Idrissov, Kazakhstan is implementing, together with the United Nations Development Programme (UNDP) an innovative partnership programme to assist governments, academic institutions and businesses to improve training for young people in the areas of health, energy and agriculture. Thus, last month, specialist doctors from seven African countries were in Kazakhstan to learn new skills to help save lives across their continent.

The meeting, held on the margins of the UN Sustainable Development Summit and the adoption of the 2030 Agenda for Sustainable Development, included leaders from Bangladesh, Benin, Brazil, Denmark, Ecuador, Egypt, Indonesia, Kazakhstan, Malaysia, the Maldives, Nepal, Nigeria, Pakistan, Samoa, Saudi Arabia, South Africa, Uganda, Zambia and Zimbabwe, the administrator of the UNDP, the president of the World Bank, the managing director of the International Monetary Fund, the director-general of the World Trade Organisation, the director-general of the Food and Agriculture Organisation, the president of the New Development Bank (BRICS), the undersecretary-general and high representative for Least Developed Countries, Landlocked Developing Countries and Small Island Developing States and the executive secretary of the UN Economic and Social Commission for Asia and the Pacific, reported the UN official web page.

On Sept. 27, Idrissov attended a meeting of foreign ministers of Kazakhstan, Kyrgyzstan, Tajikistan, Turkmenistan and Uzbekistan with U.S. State Secretary John Kerry in the so-called C5+1 format, which also was held on the sidelines of the UN General Assembly in New York.

U.S. State Department spokesman John Kirby stated that the C5 foreign ministers and Kerry discussed how the United States and countries of the region can work together to address common challenges to security and economic development.

According to Kirby, the group reviewed the security situation in Afghanistan and its impact on stability in Central Asia.

Kerry and the foreign ministers agreed to continue C5+1 format discussions in the near future to supplement existing bilateral dialogues.

“Kazakhstan is committed to a politically stable and economically sustainable Central Asia. We strongly support mutually beneficial development, equality among countries. It is essential that the national interests of every country in the region taken into account. Mutual trust and the balance of interests are fundamental principles of Kazakhstan’s foreign policy,” Idrissov said during the meeting, as reported by the Kazakh Foreign Ministry.

In his words, Kazakhstan is contributing to global efforts to counter extremism and terrorism, including implementation of provisions of UN Global Counter-Terrorism Strategy. To this end, Idrissov mentioned the fifth Congress of Leaders of World and Traditional Religions held this year in Astana, which promotes respect and understanding between religions.

“We hope that the C5+1 will provide a powerful political boost to our economic cooperation. Kazakhstan welcomes greater economic and investment engagement with the U.S. within regional frameworks . … With our WTO accession, we look forward to expanding the presence of global corporations in our country and the entire region,” Idrissov added.

Idrissov congratulated Kerry on the successful completion of the Iran deal, noting that it is another major historic diplomatic victory for him and U.S. President Barack Obama.

In addition, Idrissov noted that reconstruction of Afghanistan remains one of the critical issues for the agenda of Central Asian countries. The peace process, economic rehabilitation and security in Kazakhstan country will open a wide range of opportunities for the whole region. Transport and trade projects, connectivity between Central and South Asia are vital elements of sustainable development in Eurasia, he said.