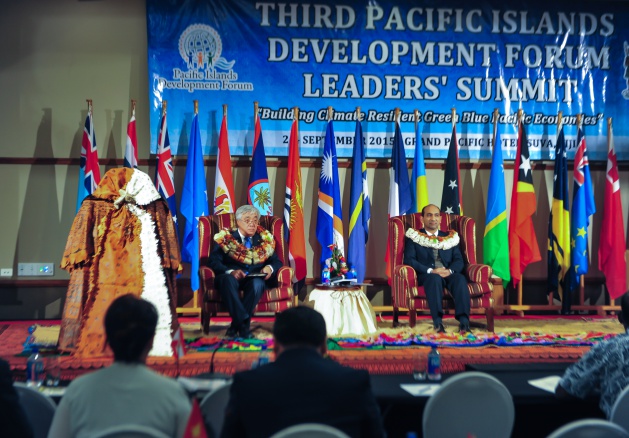 PIDF is a unique platform joining influential individuals from the public and private sectors and civil society to address regional development challenges through mutually-beneficial innovative partnerships. The theme for this year’s summit in the Fijian capital was “Building Climate Resilient Green Blue Pacific Economies.”

“Many areas of our country face increased pressure on already scarce water resources because of rising temperatures and more extreme droughts. It is why the overall theme of this week’s summit – ‘Building Climate Resilient Green Economies’ – is so important not just to forum member states but all countries, whatever our size or location,” said Idrissov in addressing the delegates.

The summit took a pivotal look at the actions on climate change, as it will be the final opportunity for the people of the Pacific to meet and discuss their stance for the critical 21st Conference of the Parties to the UN Framework Convention on Climate Change to be held later this year in Paris. Key messages were formulated and a Suva Declaration on climate change was opened for signature.

“In order to achieve a meaningful agreement in Paris in December, renewed focus must be given to five areas: cutting emissions, mobilising money and markets, pricing carbon, strengthening resilience and mobilising new coalitions,” said Idrissov in his address.

The foreign minister also drew attention to Kazakhstan’s desire to promote efficient management of natural resources and the transition to a green economy. The points are implemented in the framework produced in conjunction with the UN Economic Commission for Europe and Economic and Social Commission for Asia and the Kazakhstan-initiated Green Bridge Partnership programme supported at the Rio + 20 conference on sustainable development in 2012.

The forum debate revealed a serious practical interest of island nations in the Kazakh initiatives in terms of contributing to the development of innovative technologies, exchange of experience in this area and strengthening bilateral relations.

“Along with water and food security, energy is also high on our agenda as we move forward in our bid for a UN Security Council seat for 2017-2018. As active and committed members of the international community with a strong record of campaigning for peace, disarmament and dialogue, we believe we can make a valuable contribution to the work of the United Nations,” emphasised the minister.

Idrissov expressed his gratitude to Fijian leaders for the meetings and the warm welcome, noting that Kazakhstan views the Pacific region as one of the promising directions of its foreign policy.

“We are interested in further development of bilateral relations with Fiji, which is an important partner for Kazakhstan in the region,” he said.

In turn, Nailatikau commended the Central Asian nation’s growing role in the international relations system, calling Kazakhstan “a prime example in nuclear disarmament which everybody recognises.”

The parties agreed that the time has come to intensify cooperation between the two countries. The full potential of bilateral cooperation will contribute to further intensification of contacts and mutual support in international organisations and various international initiatives. Bainimarama emphasised that Fiji welcomed Kazakhstan’s candidacy for the UN Security Council for 2017-2018.

Idrissov and Waqa discussed the development of bilateral cooperation in political, trade and economic spheres and collaboration on pressing international problems. Waqa is aware of Kazakhstan’s international initiatives and candidacy regarding the UN Security Council. Idrissov noted the latter was advanced in accordance with the principles of fair and equitable geographical rotation and adequate representation of all Asia-Pacific group member states.

Meeting with George, the leaders discussed the possibility of establishing a closer economic, trade and political partnership between Kazakhstan and Micronesia. Both sides expressed interest in developing fruitful cooperation in the international arena through regular consultations and coordination of efforts in various multilateral institutions.

Idrissov and Emelee exchanged views on the prospects of mutually beneficial bilateral cooperation.

“Given that the diplomatic relations between Kazakhstan and Vanuatu were established not so long ago, we are looking forward to establishing a positive trend in the development of bilateral relations and cooperation within international organisations,” said Idrissov.

The Kazakh delegation also used the PIDF platform to invite Pacific island nation officials and private companies to participate in EXPO 2017 in Astana.

With the involvement of the Astana EXPO 2017 company, a special presentation was held for the summit participants. In his speech accompanied by video and photo exhibitions, Idrissov emphasised that the event aims to facilitate the exchange of green energy experience and modern technologies at the global level. That is why Astana is interested in ensuring the widest possible participation of countries, he said, and, in accordance with the requirements of the Bureau International des Expositions (BIE), will provide technical support for the participation of 60 developing countries.

“EXPO 2017 will provide an unprecedented chance to showcase and share the latest developments and knowledge in energy saving and alternative solutions,” said the foreign minister.

Overall, the PIDF summit was viewed by the Kazakh diplomacy as an excellent platform to strengthen contacts with the leadership of Pacific island nations and review promising areas of collaboration with the region that has its own distinct voice in the global system of international relations.