ASTANA – Kazakhstan and Greece have had more than 20 years of positive bilateral relations. And the ambassador of the Hellenic Republic to Kazakhstan Efthymios Pantzopoulos recently told The Astana Times he believes the future will bring more growth in a number of key economic and social areas. 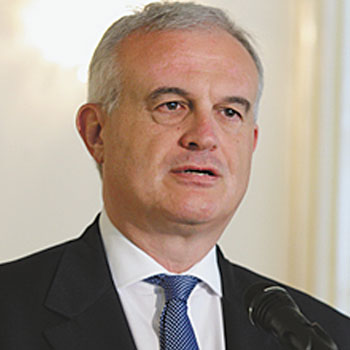 “We’d like Kazakh companies to invest in Greece and participate in the programme of privatisation,” Pantzopoulos said. “I have already spoken about that to both the foreign ministry and the chamber of commerce and industry,” Pantzopoulos told The Astana Times.

Those conversations come at a key time with joint ministerial meetings ahead, as well as negotiations on the European Union’s and Kazakhstan’s enhanced cooperation and partnership agreement. Tourism and cultural exchanges between the countries are also on the rise, and new possibilities for increasing trade as well as knowledge and education exchanges are on the horizon.

Trade will be a focus of the Joint Intergovernmental Committee on Economic and Technological Cooperation between Greece and Kazakhstan on October 14-15. Currently, Greece’s main exports to Kazakhstan are food products, lifts, furs, beauty products and tobacco, while Kazakhstan exports oil, copper, wheat and semolina to Greece. But there is room for expansion, says Pantzopoulos, and an intention by both the Kazakh and Greek chambers of commerce to increase trade.

“We also hope we can export sanitary products to Kazakhstan, pharmaceuticals, telecommunication and construction materials,” he said, adding that he is working toward this. Greece’s main products, olive oil and wine, are also high on the list of potential new exports and will probably be discussed in detail at the upcoming meeting, Pantzopoulos said.

Pantzopoulos also sees room for increased cooperation in the area of renewable energy, a primary focus for Kazakhstan and the theme of the EXPO 2017 international exhibition to be held in Astana.

“We have very good performance in renewable energy services… Now, these services are at the core of Greece’s investment and energy policy. Biomass and biofuels, like biodiesel have been identified as strong market components with high growth potential in Greece. So Kazakh investors are sure to find many opportunities… and will benefit from attractive trading tariffs,” he said.

Greek construction companies with experience building in the Middle East and North Africa are also attractive options for investment from Kazakhstan, added Pantzopoulos, and a website providing details of the privatisation programme and the opportunities it offers has been passed along to the Ministry of Foreign Affairs and the Chamber of Commerce for potential investors to explore.

The great maritime state is also happy to share its vast experience with the world’s largest landlocked nation. “We can give… education to young Kazakhstanis who are interested in working on ships in the Caspian Sea.” Pantzopoulos says there has also been some interest by Kazakhstani journalism students in visiting Greek schools with journalism programmes. There haven’t been any exchanges so far, but he says he would like to see some and he has some in mind for students at university and high-school levels. “Young people… should see how their counterparts live in other countries,” he said. “I think it would be very interesting.”

Tourism between the two countries is already set to break a record this year. “In 2010, we had almost 3,000 visas, but in 2011 and 2012 (we processed) 5,000 each year. This year definitely we will have a record because so far there are more than 5,000,” he said. The tourism boost comes from charter flights running between the two countries, specials by Kazakh journalists about Greece and the embassy’s efforts to make the visa process painless. “We grant visas within 48 hours—working hours, that is,” Pantzopoulos said. South Kazakhstan residents can apply through partner VFS Global in Almaty to have their applications sent north to Astana without having to make the trips themselves, and there are plans to extend this partnership to other regions of the country.

Travel among the country’s diplomatic corps has already become easier, since Greek and Kazakhstani holders of diplomatic passports will no longer need visas to travel between the two countries, the result of an agreement signed in 2012.

Ambassador Pantzopoulos is also actively promoting Greek culture in Kazakhstan. This past fall, the embassy organised a concert of Greek and Kazakh music, which the ambassador called a success. And they organised two events with UNESCO to honour the anniversaries of famous Greeks. But the ambassador is also pleased with the extent of cultural exchange that currently exists.

“Recently, when I visited the national library here in Astana, I was surprised that some ancient Greek writers who are less well known in Greece… have been translated into Kazakh! Not into Russian, but into Kazakh. Also, they are now ready to translate Homer’s Illiad and Odyssey into the Kazakh language. Also, I was positively surprised because the Greek myths in the Kazakh language are now almost in their 20th edition, if I’m not mistaken.” The Greek embassy has added to the national library by donating books about Greek history.

Several opportunities for exchange are coming in the near and medium future. At the end of August, President of the Hellenic National Committee of UNESCO Maria Papachristopoulou-Tzitzikosta will visit Astana to participate in the “Global Ethics: Save the Planet Earth” conference, organised by the Kazakhstan Federation of UNESCO. Ambassador Pantzopoulos is planning an event to mark Greece’s turn at the EU presidency next year. And Greece plans to participate in EXPO 2017. “Greece is interested in renewable energy, definitely,” said the ambassador, and said Greek companies will take part in the expo and perhaps more. “Some Greek companies have already expressed interest in participating in the organisation, in construction, building, providing lifts for the buildings… Kleemann company (that) has its base in Macedonia, in Greece, produces lifts, very good, very high-quality lifts. They have the intention of opening an office here… and they want to use their experience for providing the expo with its lifts.”

Promoting relations, especially trade, is, the ambassador’s priority in Kazakhstan. He said the efforts of the country’s leadership have made the country a force for peace and stability, something recognised by the international community. This stability, he said, has led to a stable and promising economic environment. “We encourage Greek businesses to make exports to Kazakhstan and also Kazakh businessmen to invest in Greece.”