ASTANA – Four hundred and ten tons of highly toxic rocket fuel used to propel missiles during the Soviet era and which had been stored for more than 20 years on Kazakh territory was removed June 29 for disposal in Russia. 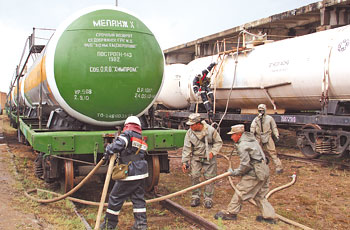 410 tons of the fuel component melange was loaded at Saryozek Station in the Almaty region for delivery to the Russian Federation.

“On June 29, at Saryozek Station in the Almaty region,410 tons of the fuel component mélange was loaded onto Russian fuel tanks for delivery to the Russian Federation and disposal at industrial enterprises,” Colonel Amangeldy Aubakirov, head of the Centre for the Control of Arms Reduction and Security Inspection under the Ministry of Defence, announced during a July 15 press conference .

The fuel, which had been stored in deteriorating containers, was loaded onto a train and shipped to Dzerzhinsk, Russia.

According to Aubakirov, the work was carried out by technical experts of the Ministry of Defence of the Republic of Kazakhstan with the assistance of experts and specialists of the Organization for Security and Cooperation in Europe (OSCE), the Russian Federation and Ukraine.

Kazakhstan first applied to the OSCE in 2006 for assistance in processing and utilizing Kazakhstan’s reserves of mélange. Experts from both sides held several rounds of talks and visited various potential storage locations.

Spain also helped fund the removal of the fuel from Kazakh territory.

Eighty percent of the removal project was funded by Kazakhstan and Spain and was implemented by the OSCE with Kazakhstan’s Defence Ministry, as well as the Russian scientific production firm Technoazot and the Russian state enterprise “Zavod Imeni Ya.M.Sverdlova”.

“Most of the project was financed by the Kazakhstan side, however, the Kingdom of Spain also contributed. The total amount of spent funds was 600,000 euros, 150,000of which was allocated by Spain,” Colonel Aubakirov explained.

“We appreciate the cooperation and support of all our partners that helped ensure the safe removal and shipment of mélange from Kazakhstan’s territory. Due to the professionalism, expert guidance and financial support of all parties involved, this extremely dangerous substance no longer poses a threat to the environment and people in this country,” Ambassador Natalia Zarudna, Head of the OSCE Centre in Astana, said at a ceremony on the occasion of removal of the toxic fuel held in Sary Ozek.

After the collapse of the Soviet Union, a number of post-Soviet countries had stocks of liquid rocket fuel mélange, which was used with intermediate- and shorter-range missiles, which were in service within the Soviet Army.

“In order to ensure safety and prevent accidents, the Ministry of Defence submitted an application to the OSCE to assist on export of mélange for subsequent disposal,” the Kazakhstan defence ministry said in a statement. “The chemical properties of mélange have become useless. It is not suitable for refilling missiles, but, nonetheless, each year it acquires increasingly dangerous properties. It corrodes the walls of tanks and there is a risk of spillage,” Colonel Aubakirov said.

Mélange is a component of liquid rocket fuel that is used as an oxidizing agent. The main component of mélange is nitric acid. It was used in combat intermediate- and shorter-range missiles, space launch vehicles and spacecraft. In addition to the Soviet missiles, it was also used in Chinese combat rockets and the first launch vehicles in the 1960s and 1970s.

The removal of mélange from Kazakhstan is part of a broader OSCE effort to remove the toxic component from a number of OSCE States. The collapse of the Soviet Union saw large quantities of mélange become obsolete in the territory of the post-Soviet countries, its allies and partners. All of the project’s individual steps, including the loading, shipment and disposal of the component, are monitored by the OSCE.

The mélange disposal is the largest OSCE donor-financed activity to date, implemented in Albania, Armenia, Bulgaria, Georgia, Kazakhstan, Montenegro and Ukraine. Financial support has been provided by the Czech Republic, Denmark, Finland, Germany, Hungary, Norway, Poland, Spain, Sweden (through the Swedish International Development and Co-operation Agency) and the United States.