ASTANA – The most recent Fryday W, held on June 12, gathered people interested in the past and present of the Netherlands to learn about the country from Dutch Ambassador to Kazakhstan Peter van Leeuwen. 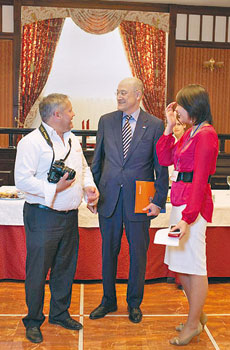 At Fryday events participants have a chance to meet with prominent personalities such as Dutch Ambassador Peter van Leeuwen (c), pictured here with Gareth Stamp of the Nazarbayev Intellectual Schools and Merey Mustafina of Fryday Astana.

At the event, which took place in a traditional relaxed setting, participants shared experiences and contacts and chatted about the cultural life of Astana before the formal talk and the following question and answer session.

Fryday is a network of professionals in thirteen countries, that organises networking events for cosmopolitan professionals and mixes locals and expatriates in the different cities in which it operates.

The point of the Fryday events is to bring people together by providing a platform for communication. Fryday events have two concepts, Fryday Afterwork, a very free and flexible format that takes place on a Friday evening, and Fryday W, a mid-week format that includes a short speech on a relevant topic by an invited speaker. Every event is held at a new venue.

This most recent Fryday W attracted entrepreneurs, restaurant directors, employees of Samruk Kazyna, Kazakhmys and others.

The official event began with a welcoming speech by the organiser of Frydays in Astana, Merey Mustafina. She introduced Ambassador van Leeuwen to the audience and thanked everyone for coming to the event.

Ambassador Van Leeuwen then gave a very informational speech about the Netherlands. He shared a bit of the country’s history and tidbits about the location, population, business practices and other aspects of life in the Netherlands.

“I am here in Kazakhstan for my second mission. The first mission was in Almaty, now we have a representative office there, and the embassy here,” he said. Ambassador Van Leeuwen first served in Almaty from 2002-2006; his current mission began in 2011.

As promised, the ambassador had prepared a gift for the best question, which was given to Assel Smagulova, manager of the Department of Strategy and Corporate Governance of Samruk Holding. Two other prizes were drawn in a raffle. The winners were Daulet Akhmetov, AES Company, member of the board of Kazakhstan Electricity Association, and Yernar Kiyekbayev, lead engineer-metallurgist, metallurgical production office, Kazakhmys Corporation LLC.

Fryday Astana is a large community of socially active people who meet at interesting venues in the city to chat, network and learn. “The main advantage of the Fryday is communication with interesting people,” Merey Mustafina said.