World Anticipating Next Round of Iran’s Nuclear Programme Talks

By Nadezhda Khamitova in International on 13 March 2013

ASTANA – On February 27, after two days of talks between EU3+3 and Iran the parties agreed to hold a meeting of technical experts in Istanbul on March 18, to be followed by another round of high level talks in Almaty on April 5-6. 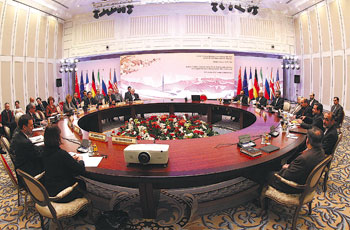 EU3+3 and Iran representatives met in Almaty on February 26-27 (above) and are set to meet again for the next round of talks in Almaty on April 5-6.

While anticipations were low for the February meeting, it ended on a slightly more upbeat tone than previous rounds of such talks last year.

The upcoming meeting in Istanbul is aimed at explaining the details of the world powers’ proposal, made in Almaty, which is said to include sanctions relief and “permission to resume gold and precious metal trade, international banking activity, and petroleum trade.” Iran is awaited to respond to the proposal when the countries gather in Almaty again in April.

The participants of the Almaty talks did not reveal the details of the updated proposal of the six powers to the Iranian side but the parties agreed that overall the negotiations had a positive result.

“We collectively have developed a number of constructive suggestions for Iran. Today, we have voiced our concern to the Iranian side, which, in turn, should study and analyze our proposed measures and provide an answer at the next meeting in Almaty,” EU High Representative for Foreign Affairs and Security Policy Catherine Ashton said.

Saeed Jalili, Iran’s top nuclear negotiator and deputy secretary of that country’s Supreme Security Council, said the six powers, including China, France, Germany, Russia, the United Kingdom and the United States, made an attempt in Almaty to “get closer to our viewpoint” and expressed hope that after the Istanbul meetings, the parties will assess the proximity of their positions.

“We consider these talks a positive step, which could be completed by taking a positive and constructive approach and taking reciprocal steps,” the Iranian statement said.

“If Dr. Jalili has said it is positive, then I am pleased,” Ashton said addressing journalists in the press hall organized in the ballroom of the Intercontinental Hotel of Almaty. “But we have to look at the results.”

Many believe the upcoming talks face tough challenges in bringing the positions of the negotiating parties closer together. To recall, the key topic for negotiation during the talks in Almaty was the failure of Tehran to meet the demands of the UN Security Council and its refusal to suspend uranium enrichment, which gave reason for various parties to doubt its nuclear programme’s peaceful nature.

Sanctions introduced by the United States and its allies have considerably affected the Iranian economy. The US has sought to introduce a series of measures on Iran’s crude exports to persuade Tehran to cooperate with the international community on its nuclear programme. The US and the EU suspect Iran of seeking to build nuclear weapon capabilities, meanwhile Iran maintains its position that it simply seeks to develop peaceful nuclear industry.

Oil exports account for a majority of Iran’s revenues, thus the sanctions significantly impacted the country’s incomes and caused the growth of unemployment.

According to a January 2013 BBC report, Gholam Reza Kateb, MP on the national planning and budget committee, stated that in a parliament report announced by Oil Minister Rostam Qasemi “the oil sales are down by 40% and income has dropped by 45% in the last nine months.”

International sanctions on Iran include a UN embargo on arms exports and nuclear technology as well as EU bans on most financial transactions as well as the purchase of crude oil. The United Stated prohibits almost all trade with Iran.

It was said during the Almaty talks that all sides are unanimous in seeking a diplomatic resolution to international concerns regarding Iran’s nuclear programme based on the NPT (Treaty on the Non-Proliferation of Nuclear Weapons) and the full implementation by Iran of the UNSC (United Nations Security Council) and IAEA (International Atomic Energy Agency) Board of Governors’ Resolution.

“As in Istanbul, Baghdad and Moscow, the EU3+3 remain absolutely unified in seeking a diplomatic resolution to international concerns regarding Iran’s nuclear programme, based on NPT and the full implementation by Iran of UNSC and IAEA Board of Governors’ Resolutions. The EU3+3 has tabled a revised proposal which we believe is balanced and a fair a constructive basis for constructive talks. The offers addresses the international concerns on the exclusively peaceful nature of the Iranian nuclear programme, but is also responsive for Iranian ideas,” the EU statement said.

Just as the parties – participants of the Almaty meeting, the world community awaits the outcome of the next round of talks.

Representatives of the five permanent UN SC member states (China, France, Russia, the UK and the USA), as well as representatives of the Islamic Republic of Iran, Germany and the European Union participated in the Almaty talks. The meeting attracted major international press with more than 200 journalists being accredited for the talks.

The April talks are expected to attract similar international attention. Kazakhstan’s Ministry of Foreign Affairs has already announced in its official statement its readiness to host the next round of talks in April.