By Vyacheslav Lebedev in Culture on 27 March 2013 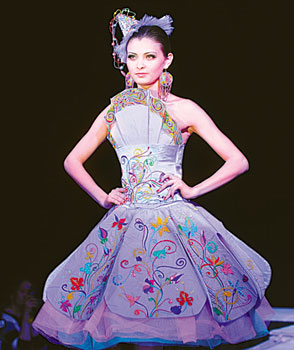 TARAZ – On March 14 and 15 young fashion designers from Kazakhstan, Russia, China, Spain and other countries showed their collections at the first Aspara International Fashion Festival, organised by the Taraz Municipal Department of Culture. Winners of the Vanguard and Prêt-a-Porter competitions received monetary prizes and gifts from Symbat Fashion Academy.

The catwalk of Balasagun Central Concert Hall witnessed a riot of colour over two days of hosting the creations of Kazakhstan’s young fashion designers. For two days the jury chairman, Chief Designer of Asyl-Design Fashion House of Taraz Aidarkhan Kaliev, and jury members including Head of the Architectural and Construction Academy Professor Gulnara Ibrayshina, Chairman of the Association of Textiles and Clothing from China Jin Ton Zhi, Spanish art expert Inmaculada Castrejon and Art Director of Symbat Fashion Academy Balnur Asanova as well as other masters, were applauding along with the audience to the creations of future fashion designers.

In the Vanguard nomination, all 19 participants managed to create a modern image of Aysha Bibi beauty. The jury took special notice of the web felt dresses collection by Gulshat Dzhuraeva from Almaty and the works of Shymkent designers. 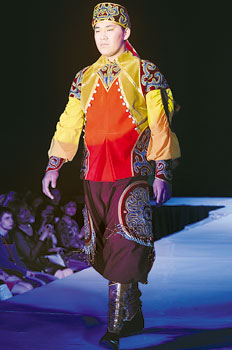 Designers presented exquisite embroidery, original ornaments, layering with felt and muslin, art décor and vintage dresses of panne velvet that were a hit with the audience.

“Apart from styled chapans (quilted dressing gowns) and ethnic embroidery, in co-authorship with Mavluda Kasymova, we have shown casual clothes in fabrics that are unfortunately no longer produced these days,” said Yelena Ladik, a designer from Samarkand. “We made them of a so-called gift stock of cloth remnants, from ‘grandmothers’ trunks’.”

In addition to cash awards of 200,000 and 100,000 tenge, winners were given special prizes provided by Symbat Fashion Academy and Asyl-Design Fashion House.