Astana to Introduce New Venue for Connoisseurs of Art

By Bektur Kadyrov in Astana on 6 February 2013 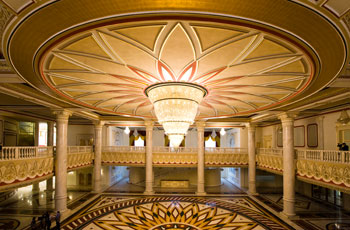 The spectacular hall of the Astana Opera is awaiting art connoisseurs.

The first season is to be opened in April 2013. The new theatre headed by well-known composer and public figure Tolegen Mukhamedzhanov is going to be the largest one in Central Asia.

The construction of Astana Opera is winding down. The main hall has 1,250 seats, of which 450 are in the stalls, the rest are in the four tiers, designed in the Italian style, organized around the perimeter. In addition to the main stage, there is a chamber music hall for 250 seats, two large, six small and 11 additional rooms for rehearsals. For chorus and ballet troops, two separate rooms were designed. The main stage impresses with its area, which is about 400 square metres with additional side stage of 768 square metres.

The orchestra pit was designed for 120 musicians. Overall, the scene represents an engineering and technological wonder. The acoustics system installed by German specialists makes the sound characteristics unique, leaving no part of the hall unreachable by the sound.

It could be confidently stated that Astana Opera is bound to enter the ranks of world’s best theatres, along with La Scala, San Carlo and Bolshoi.

Designers and architects from Switzerland, Italy, Albania, Morocco, Russia, and Kazakhstan were jointly developing the project of the theatre.

The opening of the theatre is awaited in the second half of June and will be timed to the Day of the Capital. The world premiere here is scheduled on October 20-21. “Aida” by Verdi will open the first theatrical season of Astana Opera, performed together with the San Carlo Theatre. A group of artists from the Bolshoi Theatre of Russia is going to come for the premiere too.

Other facilities of the theatre will include a museum and a ballet school, to ensure children have wide access to the beautiful art.