By Serik Temirgaliev in Tourism on 23 January 2013

SHCHUCHINSK, KOKSHETAU REGION – A new five-star hotel was formally opened on the coast of Lake Shchuchye in the Burabay resort district on December 21. The hotel, designed to provide the highest level of service and comfort to the most discerning guests, will bolster the resort’s claim to be called “Kazakh Switzerland.” 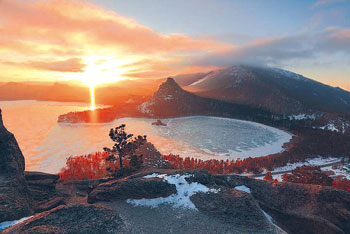 The lakes and pine tree covered mountains of the Burabay resort area has long been seen as Kazakhstan’s “Switzerland”.

Tourism is one of the priorities for the development of Kazakhstan’s economy. The multiplicative effects of the tourism trade will boost many sectors of entrepreneurship. Tourism stimulates the development of construction, trade, agriculture, communications, production of goods and services and other business sectors. In addition, the tourism industry brings in significant revenue. As President Nursultan Nazarbayev noted at the meeting on the development of northern regions in August this year, “tourism is a huge source of income and part of the economy of any country.”

In his state-of-the-nation address “Socio-economic Modernization, the Main Vector of Kazakhstan’s Development,” the president called for a systematic plan for the Burabay resort in the Akmola region. A plan for 2012-2013 was approved by the government last July. An initial 17.8 billion tenge was allotted from the national budget with an amendment in October allocating an additional 4.1 billion tenge.

In particular, the plan provides measures to improve the infrastructure of the Shchuchinsk-Burabay resort area, including measures for maintaining roads, cleaning lakes and improving tourist routes. These improvements are expected to spur investment in the region in the form of hotels built by private enterprise. The government’s approach is simple and clear: the state creates conditions and private capital invests funds. In addition to the fundamental renewal of the infrastructure, the state has also created a privileged tax regime in the Burabay special economic zone.

This approach is paying off already. The construction of a new five-star Rixos hotel on one of the most beautiful lakes in the region has been completed and the hotel has officially opened its doors. High quality services are guaranteed by the management of a company well known for its professionalism.

The new hotel has 200 rooms. Even deluxe rooms have a high level of comfort, to say nothing of the luxury presidential suite and penthouse suite. The hotel’s interior was designed by the famous German company Peter Silling & Associates, which specializes in interiors for high-class hotels around the world. Even the furniture was made specifically for the new hotel, based on the sketches of German designers.

In the summer, visitors can enjoy swimming in the waters of the lake and walking in the green pine and birch forests that surround the tourist complex. In winter, sledding and skiing trails and an ice rink are available for those who prefer a more active lifestyle. Equipment can be rented at the hotel or through specially equipped rental stores.

In addition to an indoor heated swimming pool, large fitness and spa area and two restaurants, the complex offers good opportunities for conferences, presentations and business meetings. There is a big ballroom and four meeting rooms, the Astana, Almaty, Istanbul and Ankara rooms.

The new tourist facility constructed within the state Programme of accelerated industrial and innovative development (PAIID) sets a new standard for hotel service and an example of a unique approach to the development of tourism in the Burabay resort zone.