By Saniya Bulatkulova in Kazakhstan Region Profiles: A Deep Dive Into the Heart of Central Asia, Nation on 15 January 2023

ASTANA  – Altyn Emel National Park located in the Almaty Region published a video of the rare Kumai bird species sitting on Ulken Kalkan mountain on the right bank of the Ili River on its Instagram account. 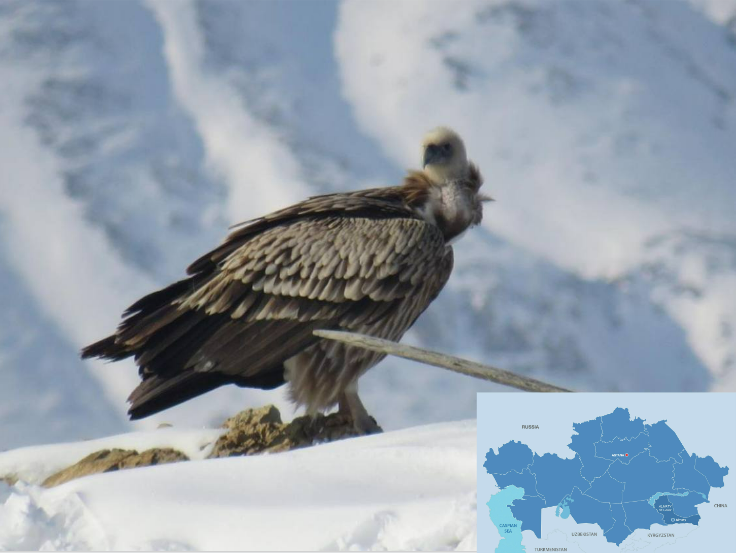 The bird is listed as ‘near threatened’ on the International Union for Conservation of Nature (IUCN) Red List. Photo credit: park’s press service. Click to see the map in full size

According to the park’s press service, Ili forestry head Didar Bazarbekov came across the bird while on duty early in January.

“Kumai birds are usually found alone or in pairs. Their distinctive feature is that they are sedentary. The mating couple co-exists for many years. In February-March, female kumai lays one or two greenish-white eggs with brown spots. The chicks remain in the nest until early July. They feed on carrion, mostly hoofed animals,” reported the park’s press service on Instagram.

The Kumai is the largest bird of prey in the country’s fauna and is included in Kazakhstan’s Red Book. Their wingspan reaches three meters, and their weight can reach up to 10 kilograms. The head and neck are covered with white fluff, while the body is colored in light grey, white and dark brown.

These birds usually nest in high mountains in coniferous forests and in steep rocky tracts. The only known flock of birds is located in the upper part of the Sharyn River in the Almaty Region. In 1989, a Kumai nest was discovered in Ile-Alatau National Park at an altitude of 3,000 meters.