By Assem Assaniyaz in Nation on 24 January 2023

ASTANA – Kazakhstan’s political reset is not just for the sake of novelty, but for the implementation of important economic and social reforms this year, said Director of Kazakhstan Institute for Strategic Studies (KazISS) Yerkin Tukumov in an interview with Kazinform, referring to the presidential election and national referendum on constitutional amendments in the past year, as well as to the upcoming parliamentary election this March. 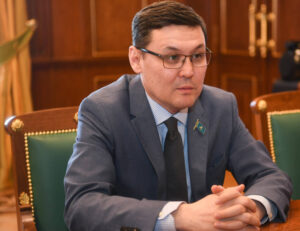 KazISS, which celebrates the 30th anniversary of its foundation, continues to play a vital role in the political decision-making of the country.

“Last year laid the foundation for a fairer Kazakhstan, but most importantly, Kazakh President Kassym-Jomart Tokayev has indicated that political reforms are needed to carry out economic ones. There has never been such an instruction before. First came the economy, then politics. Now, the political basis is the foundation for economic reform,” said Tukumov.

This approach, in his opinion, will provide Kazakhstan with new opportunitites.

The institute is in search of a positive experience that could be useful in Kazakhstan’s transformational period.

When asked about the ongoing expert studies, Tukumov said that “KazISS has started research on global economic processes and their impact on Kazakhstan, which includes inflation, a pandemic, and disrupted logistics chains, analyzing the risks the global situation poses – the increasing militarization and the growth of conflict in different regions of the world.”

“This year, one of the priorities is to move from words to action. We want to modify the KazISS structure and create centers specialized in foreign policy, domestic policy, economics of more applied nature,” said Tukumov.

According to him, much remains to be done in foreign policy research.

“For 30 years, we have not formed Chinese, Central Asian, and Russian schools [of political studies]. These are our neighbors, and we need to know them – what is happening in China, in Russia, how to build relations from the perspective of our pragmatic foreign policy. Moreover, there are no such schools regarding the United States, European countries, and the Islamic world. These are very difficult studies and they require highly qualified experts,” he noted.

Another crucial aspect, in his opinion, is “interaction with international partners, listening to their opinions, approaches, studying methodology, holding international conferences not because of beautiful gestures and speeches, but to discuss acute issues without barriers, including those that someone might not like.”

“For example, why do we still have visas and border issues between Central Asian countries, although we are very close nations?” said Tukumov.

He paid special attention to the value of human capital, saying that “a lot, if not everything, will depend on who will be hired.”

“Therefore, President Tokayev raises the issue of attracting as many young people as possible, including those who have studied and interned abroad able to implement these important reforms,” said Tukumov.

Speaking about the progress in their work so far, he noted that “KazISS remains a leading analytical center not only in Kazakhstan, but also in Central Asia and in the Commonwealth of Independent States (CIS).”