ASTANA – For hundreds of years, the nomadic rhythm of life was defined by mobility and practicality even in the choice of dwelling. The Kazakh yurt, also referred to as kiyiz ui (felt home), is a portable, weather-resistant, eco-friendly house that enabled traditional Kazakh herders to maintain a nomadic lifestyle that had them spending winters in pastures and summers in the mountains. 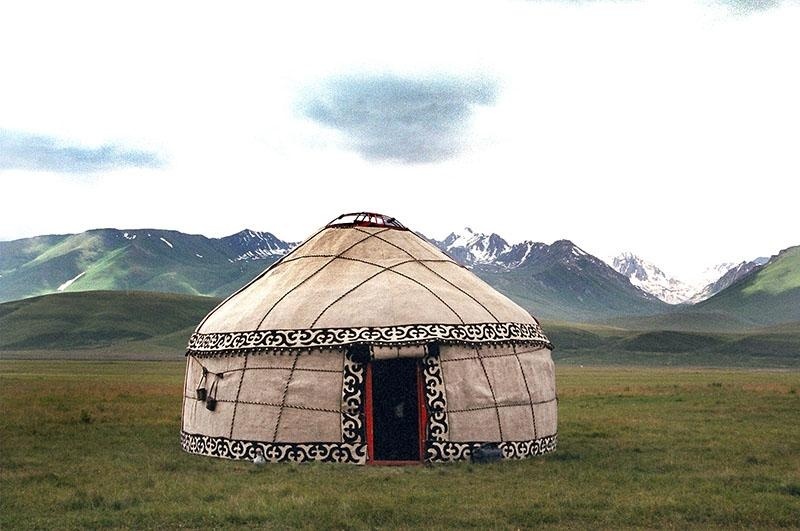 The history of the nomadic man is tightly entwined with the history of the yurt. It has sheltered Kazakh nomads for thousands of years, keeping in warmth in winter and maintaining coolness in the summer. Kazakh kiyiz ui or boz ui in Kyrgyz, ak oy in Turkmen, ger in Mongolian has become a traditional nomadic home of nations surrounding the regions in Central Asia.

Kiyiz ui became an important part of Kazakh cultural heritage. In 2014, it was included in the United Nations Educational, Scientific and Cultural Organization’s (UNESCO) Representative List of the Intangible Cultural Heritage of Humanity.

Setting up a Kazakh yurt

Originally, yurts were made from a felt cover wrapped around an oval-shaped wooden frame based on sliding lattice sections, called kerege. 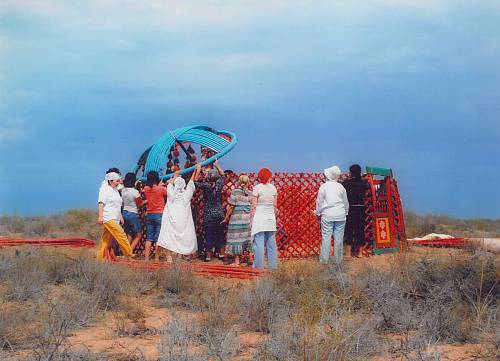 The set-up process of the yurt involved the whole family. Photo credit: ich.unesco.org.

The wooden frame also included wooden poles – uyk. In their multiplicity, they formed the roof of the yurt. The dome of the yurt is called shanyrak, which simultaneously serves as a chimney and a window for the yurt. 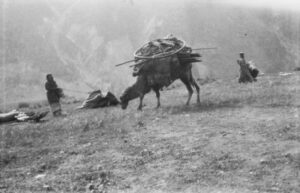 Camel with a dismantled yurt on the back with the shanyrak on top, Eastern Turkistan, 1920. Photo is courtesy of the British Royal Geographical Society, Instagram @re.yurt.

Since ancient times, the set-up process of the yurt involved the whole family. Men and boys made a wooden frame from wild willow. While men were busy with the frame, women made a protective material for the yurt from felts. This dense and strong material kept warmth in the yurt in the winter and proved waterproof even on rainy days. Women were also engaged in interior decoration: they made carpets and sewed blankets.

“[They] Assembled the yurt by the whole world. Why so? Because Kazakhs believed that with each inserted uyk you bring a wish of happiness to this house. For example, if it is a yurt for a young couple [you would make a wish] that they would have a lot of offspring. Or, if it is a woman’s yurt, you would wish that the kazan (cauldron) would not get empty and would always be boiling with meat in it,” said Batyrkhan Zhumabayev, the head of Sacred Kazakhstan research center in his interview with the Mir television and radio company. 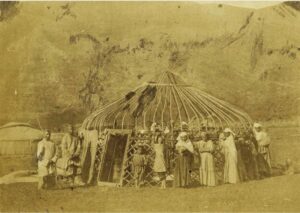 A Kazakh family gathered to set up a yurt in Turkistan in the 1870s. Photo credit: Lubov Poltorackaya, Instagram @re.yurt.

Shanyrak, the dome of the yurt, was a family heirloom, a symbol of the continuation of the family. It was handed down from generation to generation. The Kazakh phrase “shanyrak yesi,” meaning the owner of the shanyrak, refers to a married man, who has established his own family.

As such, the yurt remains a symbol of family and traditional hospitality, fundamental to the identity of the Kazakh people.

It would take about an hour for a skilled practitioner to set up a yurt.

Yurt interior decoration involved the whole community of craftspeople, who made rugs with colorful ornaments, pillows and blankets, wooden furniture, and dishes.

Once up, the yurt is furnished with household items that are placed along the kerege. 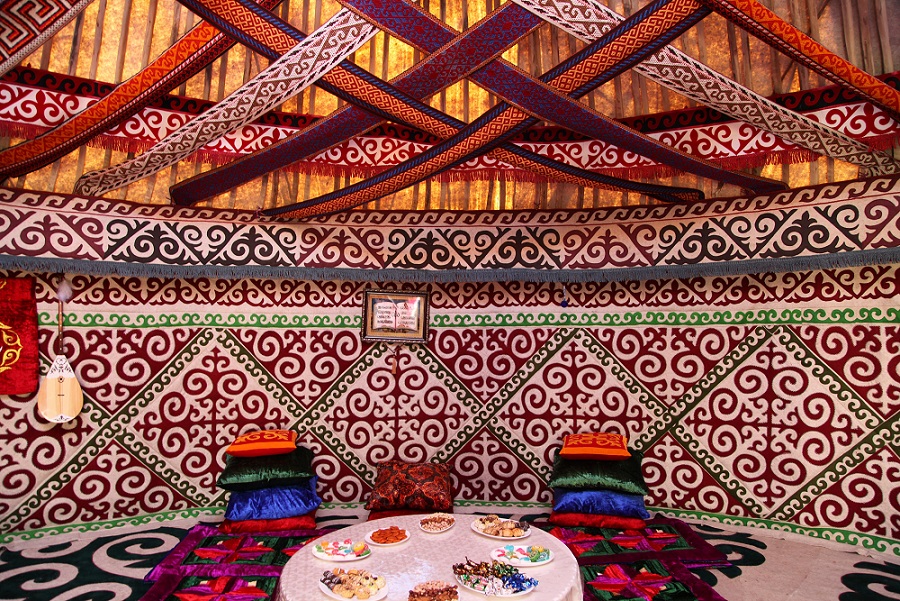 Traditional Kazakh household items had rich aesthetic value, creating a unified system of interior dwellings that represented nomadic tastes and culture along with their utilitarian purposes.

A person entering the yurt would see the world of Kazakh ornamentation predominantly on the weaving art. The floor is covered with felt carpets called tekemet, while syrmak decorated the walls of the dwelling, skillfully adorned with national patterns.

A fireplace took the central stage, around which the family gathered in winters. The beds were placed along the walls: the owners’ bed was set to the right of the hearth and for unmarried daughters and sisters, the bed was placed to the left.

Life without angles in a yurt would definitely impress modern visitors who are into the feng shui philosophy.

Modern-day use of the Kazakh yurt

In the modern days, the yurt has not lost its practical use but has adapted to modern requirements. Yurts are widely used during national holidays and at large events like weddings, festivals, and parties throughout Kazakhstan to showcase national customs. 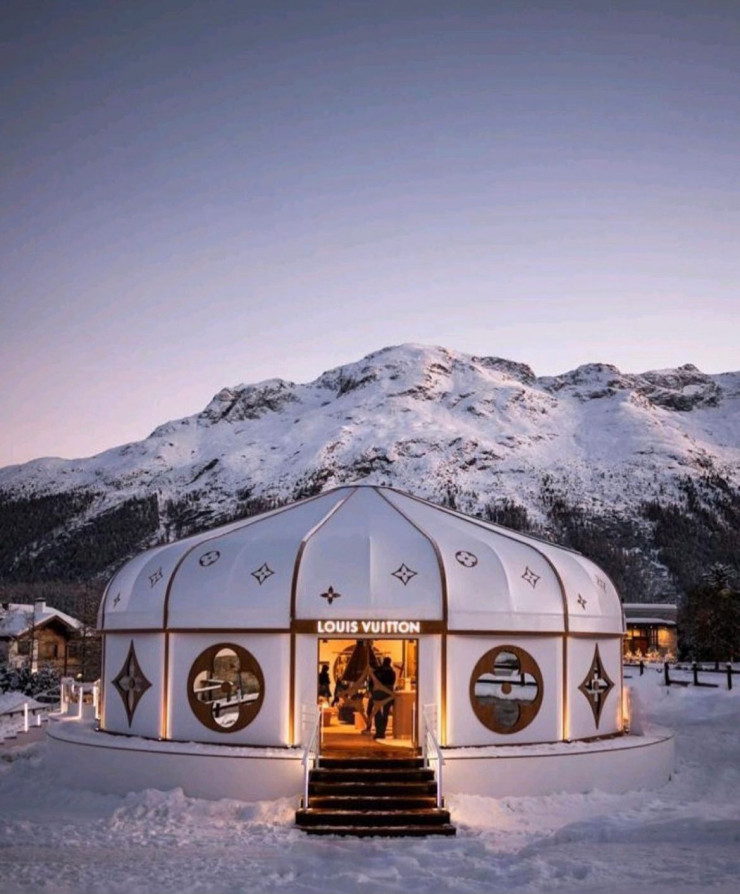 Yurts also seem to have experienced a renewed wave of popularity abroad as the world embraces eco-friendly housing. Today’s yurts are made of wood and are lightweight and flexible, they can accommodate healthier heating options and help families save on fuel costs and reduce emissions.

French luxury brand Louis Vuitton’s spectacular pop-up store built up the anticipation of visitors as it revealed the details of its exterior.

Located in the fashionable resort of St. Moritz in the Swiss mountains, the pop-up store was made in the form of a yurt. The exterior walls and the uyk-roof was decorated with the brand’s monogram symbols on white-colored walls with contrasting brown elements.

Those interested can visit it through April 10 to experience a modern adaptation of an ancient dwelling used by many generations of proud nomads that came before them.