Like Father, Like Son: Murat Auezov Was a Steward of His Father, Kazakh Classic Writer Mukhtar Auezov’s Literary Legacy

ASTANA – Last year was the 125th anniversary of writer Mukhtar Auezov, one of Kazakhstan’s greatest literary figures, followed by another anniversary this year – the 80 year celebration of his son, Murat Auezov, on Jan. 1, which gave Kazakh society another opportunity to explore the creativity of the former from his son’s perspective. 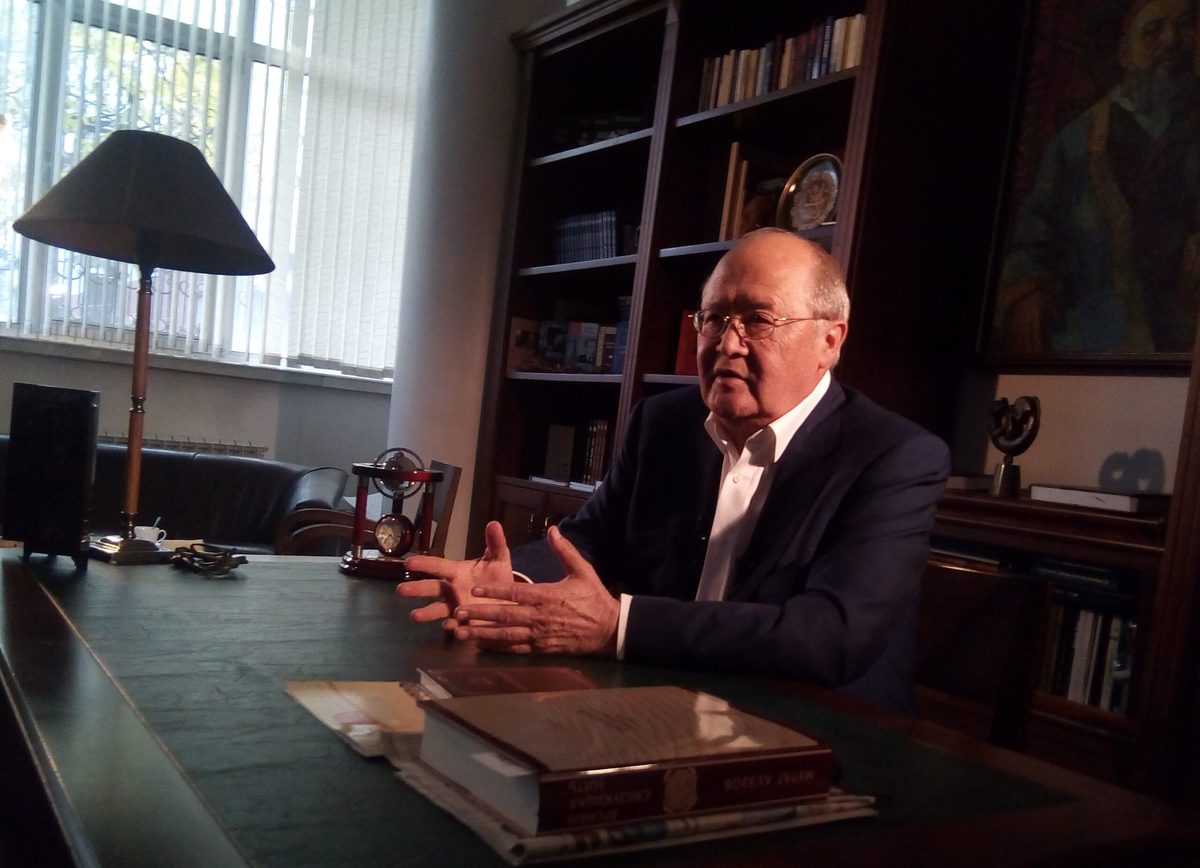 No one could reasonably claim that Murat Auezov lived under the shadow of his famous father, on the contrary, he had a rich life and career of his own, and was, at the same time, fiercely protective of his father’s legacy. He took pride in promoting what was still unsaid about Mukhtar Auezov and his legacy. Much of his vivid and powerful memoir explores the historic and social context under which Mukhtar Auezov created his works.

In an interview with the Vecernii Almaty (Evening Almaty) newspaper in 2022, Murat Auezov goes on to say that one cannot fully understand Mukhtar Auezov’s works, including the renowned “The Path of Abai” without understanding the context of his father’s work, namely by deepening their knowledge of the history of the nomads and the steppe.

“The greatest tragedy for the Kazakhs in the 20th century was famine, collectivization, and the death of more than a third of the population in peacetime. The nomadic world collapsed and with it, hundreds of thousands of people, our culture, and language went into oblivion. All this was also accompanied by repression. And what is nomadism in the life of the Kazakh people and what is nomadism in general? It is a stunning vision of the history of world civilization,” said Murat Auezov.

According to him, the fall of nomadic civilization fundamentally influenced the works of local poets and writers, including his father. 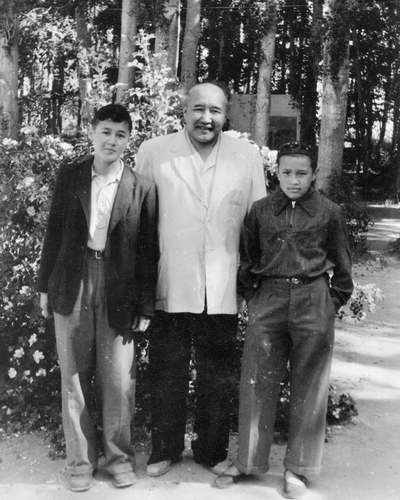 “This phenomenon should not be dismissed by any means. Our poets and writers could not help but reflect on this tragic demise of the nomadic civilization,” he said.

“What is Mukhtar Auezov? How can one comprehend his novel “The Path of Abai” and its strongest chapter “Jut” (massive loss of livestock from famine), where the very image of hunger is presented, without understanding the demise of such a mighty element as the nomadic civilization? … We cannot talk about Auezov without having in mind Alashorda (early 20th century provisional Kazakh government), Abai, the Middle Ages, the poets who foreshadowed Zar Zaman – tragic, apocalyptic literature,” said Murat Auezov.

He was born in 1943 in the Zhambyl Region in southern Kazakhstan. His personality was formed under the powerful influence of a family of outstanding people – his father Mukhtar Auezov and the boundless love of his mother, Fatima Gabitova.

In his memoir, Murat Auezov recalled the importance his father placed on preserving the language and Kazakh identity in his upbringing. “In 1949, when I went to school here in Almaty, there were two Kazakh-language schools – one for the girls and one for the boys. Under those conditions, Mukhtar Auezov took me, a six-year-old boy, to a Kazakh school. Since then, Kazakh for me is my father’s imperative and I have followed the logic of this imperative all my life,” said Murat Auezov.

In 1959, Murat Auezov entered the Institute of Oriental Languages at Lomonosov Moscow State University. As a student in Moscow, he organized the Zhas Tulpar (Young Stallion) movement that intended to oppose the colonial policy of the Soviet Union and contribute to the formation of national consciousness.

The Zhas Tulpar movement was an informal association of Kazakh youth who studied at universities in Moscow and Leningrad (current St. Petersburg) in the 1960s and positioned themselves as a cultural and educational community. Some of the political views of the Zhas Tulpar movement members contradicted the canons of Soviet ideology.

“The ideas of the Alashordinians nourished the activities of the society,” told Murat Auezov the Adyrna news agency in a 2021 interview. “Zhas Tulpar was an anti-colonial struggle, spiritual decolonization, and support for the Kazakh language and culture. Those ideas were picked up by a whole generation of poets, writers, artists, and musicians.” 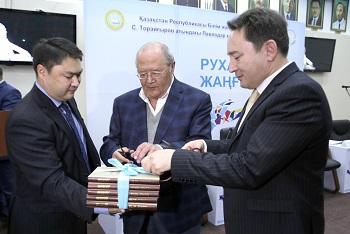 To mark the 120th anniversary of his father in 2017, Murat Auezov presented two of his own books “The thread of time” and “Dilim” at Pavlodar State University. Photo credit: tou.edu.kz

Members of the Zhas Tulpar movement were at the forefront of progressive social movements in later years, such as the Nevada-Semipalatinsk International Anti-Nuclear Movement.

When Kazakhstan declared its independence, Murat Auezov took an active part in the country’s transformation. He served as the Parliament deputy, conducted research in literature, and became the first ambassador of Kazakhstan to China. As an ambassador, he did tremendous work in popularizing the spiritual heritage of the Kazakh people, particularly the works of his father and of the poet Abai. In those years, two versions of “The Path of Abai” were translated into Chinese.

In 2017, the year of the 120th anniversary of Mukhtar Auezov’s birth, the younger Auezov published two of his own books “The thread of time” and “Dilim,” (“My Credo”) which became the embodiment of the events he experienced, the sum of his life.

The second book is notable for the fact that it was Murat Auezov’s first book written in the Kazakh language. In an epigraph to the book, the author wrote: “There were times when we almost lost our language and religion and came back again. And what about Dilim?! It is absolutely impossible to lose it. We have survived as individuals, as an independent nation, an independent state only through the health of the dil (mind/credo), the purity of the dil, the strength of the dil.”

Among the details on the elder Auezov’s contribution to literature, Murat Auezov particularly highlights his efforts in saving the Kyrgyz Manas epic, which were accused of embodying anti-humanist, feudal ideas.

In 1952, Mukhtar Auezov made the remarkable decision to go to Bishkek to make a speech in defense of the Manas epic and he won his case.

“This is a famous story,” said Murat Auezov in an interview with Forbes Kazakhstan. “He went with the risk to his life and spoke at a conference when they [the commission] had already arrived from Moscow with the verdict that it was an anti-people work and that it should be destroyed. Then, in a letter to Valentina Nikolaevna (Mukhtar Auezov’s third wife), he wrote: ‘I am aware of the danger this poses to me, yet I cannot remain silent,’” said Murat Auezov.

His father’s current recognition in the region also comes from his efforts to develop a better understanding of the literary works of Turkic-speaking countries that consequently led to closer ties among people in those countries.

“When I was 12 or 13 years old, during a trip to Issyk-Kul (lake in Kyrgyzstan), we visited the aul (village) of Sayakbay Karalayev, the great manaschi (Manas narrator). At that time, my father coached my little brother Yernar and me to know and feel the whole essence of the Turkic-speaking world. We knew that Sayakbay would like it if we knew the Kyrgyz spirit, the Kyrgyz worldview just as much as we knew the Kazakh one. That is why for me Manas became a very close work,” said Murat Auezov.