ASTANA – On the 125th anniversary of a great Kazakh literary figure Mukhtar Auezov, whose talent transcended national borders, it is worth exploring his contribution to the Kazakh and world literature. Through Auezov’s works, the reader is able to discover the Kazakh culture, understand the mentality and overcome existing prejudices.

“The Path of Abai” has been translated into 116 world languages, including Farsi, Chinese, and Vietnamese.

Auezov is best known for presenting the rich and complicated world of the great Kazakh poet and thinker Abai in his masterpiece “The Path of Abai,” but he also wrote eloquently about Kazakh society, culture, and mentality in works such as “An Orphan’s Lot,” “Beauty in Mourning,” “Savage Grey,” “Gunshot at the Pass” and “Turbulent Times.” Considered by many to be one of the greatest Kazakh writers, his books and novels have endured the test of time and are being commemorated globally.

“The Path of Abai” is the story that later brought him international acclaim, and has been translated into 116 world languages and is now available in Chinese, English, Hungarian, French, Polish, Russian, and Turkish among many other languages.

“The Path of Abai” – a path to cross-cultural enrichment 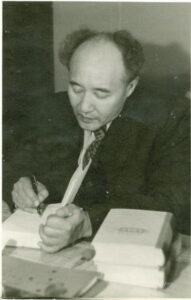 Why is Auezov’s novel on Abai so important for world literature? According to Doctor of Philology and Professor Sauytbek Abdrakhmanov, “Auezov in his novel questioned and refuted many notions about the steppe nomads that were formed since the times of the ancient Greeks, which for centuries were considered indisputable truth and even became scientific in nature.”

“Through his novel, humanity in the 20th century learned the world of the Kazakhs, the way of their life and their special worldview… Owing to Auezov’s talent, the world of Kazakhs, or, in broader terms, the world of steppe nomads, for the first time was included on an equal basis in the arsenal of universal human culture,” he wrote in Liter newspaper.

Perhaps that is why translation is more important than ever – for suddenly it opens up a new world and revitalizes people’s daily, cliche-haunted preconceptions. It shakes up the reader’s assumptions and extends the way we perceive other cultures, just as traveling does.

How many world classics might not be able to reach us if not for the work of translators? What a loss to global culture it would be if we could not read works from across the globe.

First Translation of “The Path of Abai” into Russian

The first book was translated into Russian by Leonid Sobolev, Anna Nikolskaya, Zoya Kedrina, and Nikolai Anov and published in 1950. The Russian version of “The Path of Abai” served as a source of translation into many other world languages, including English, French, and German. 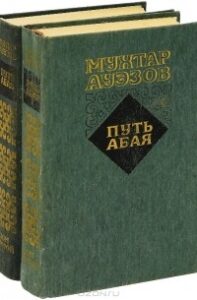 “The Path of Abai” in Russian.

Auezov was deeply in love with his native language and culture, but he was also a true internationalist. He became one of the most eloquent practitioners of the Russian language. The creative collaboration of Russian writers with Auezov, which took shape in the mid-1930s, was focused on the spiritual connection of Russian cultural figures with Kazakhstan.

In the subtle art of translating foreign fiction, it is essential to represent the everyday realities and sharp aspects of Kazakh culture, so Auezov was very closely involved with all translators.

In 1967 Auezov wrote “…very great difficulties were experienced by Sobolev in conveying these specifics. There are a lot of realities, special features of nomadic life, which are difficult to pass on.” He said that only his high-level of enthusiasm helped him complete such a creative work.

“He [Sobolev] is a skilled scientist. He knows Abai and his works, he knows the history of Kazakh culture and literature. This general artistic, cultural competence of the pedagogue is the most important condition,” wrote Auezov about Sobolev.

Sharing his memories of working with Auezov in the “Mukhtar-aga” (Uncle Mukhtar) documentary, Sobolev gave a powerful description of his personality with the words “for all his amazing education and erudition, he was a man of extraordinary delicacy and extremely interesting creativity… He translated the Kazakh images in his own peculiar Russian language, and all that remained was to catch them.”

In Russia alone, nearly two million copies of the novel were published, which is a large figure for a four-volume book.

Later, with the author’s consent, the novel was re-translated into Russian by Anatoly Kim.

Directly from the original language, the novel was then translated into Chinese and several Turkic languages. 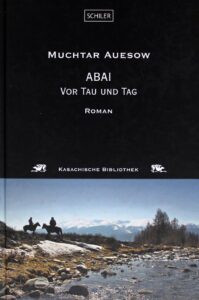 A more recent publication of “The Path of Abai” in German. Photo credit: pushkinlibrary.kz

In Berlin the novel was published in two books: first under the title “Before the Dawn” in 1958 translated by Von Hilde Angarowa, and the second book, which was titled “With the Flow of Time” in 1961 translated by Ruprecht Willnow. Both volumes were translated from Sobolev’s Russian version.

German writer Alfred Kurella once wrote in the Sonntag journal “You haven’t read ‘The Path of Abai’ yet? Then you haven’t read anything,” is quoted by Deutsche Allgemeine Zeitung newspaper. He continued to say “It is incredible, it is amazing! As if the steppe came alive and went at you, with all the splendor of its pristine nature, its gestures, and wholesome characters. And what a Shakespearean passion! You have a sense of the era like no scholarly study.”

According to Kurella, translation of the classics contributes to establishing closer ties between two cultures. “If Goethe and Heine, Segers and Bredel found a second literary homeland in distant Kazakhstan, then the novel ‘Before the Dawn’ by Auezov put a solid yurt in our country,” he said.

Interest in Auezov’s works in Germany has not weakened over time. His short stories were also translated and “The Path of Abai” was republished.

“But no rose without a thorn,” and some translations of “The Path of Abai” were not as eloquent as one would like. 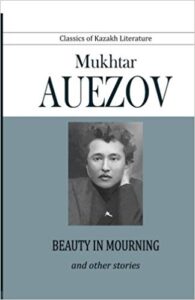 “Beauty in mourning” translated by Simon Geoghegan and Simon Hollingsworth and published in 2017. Photo credit: kazpravda.kz

“It had no luck with English,” said Auezov’s son Murat Auezov in Kazakhstanskaya Pravda newspaper article.  “At one time, the novel “The Path of Abai” was translated in a very truncated form by specialists from the Moscow Progress publishing house. But, unfortunately, a lot of things were put on stream there, while translating a work of fiction requires mobilizing the spiritual strength of the translator, as was the case in France,” he said.

The collection of Auezov’s short stories titled “Beauty in Mourning” translated by Simon Geoghegan and Simon Hollingsworth and published in 2017 was very warmly received by the audience.

The translation process was what the two acclaimed translators called “a difficult blessing” as it was not without a struggle that they delivered certain Kazakh notions such as “aul” (village), “barymta” (сattle raiding) or “dastarkhan” (tablecloth) to the world reader.

Geoghegan recalled that the first English reader of the book was his 78-year-old father. “I did not rush him with deadlines, but my father was so engrossed in the text that he read the voluminous book in three days,” he said. “For him, Kazakhstan before Auezov was a blank page. After becoming acquainted with the world presented in the works of the Kazakh classic, he rushed to the map. Seeing the country, which by its size exceeded all of Europe, my father was shocked! According to him, this book, through which he felt the flavor of the Great Steppe, should have been translated much earlier.”