By Saniya Bulatkulova in Culture on 2 January 2023

ASTANA – The Medeu open-air ice skating rink, which bears the status of the world’s largest high-mountain complex for winter sports, hosted many festive events to celebrate its 50th anniversary on Dec. 25, according to the Almaty city’s akimat (city administration). 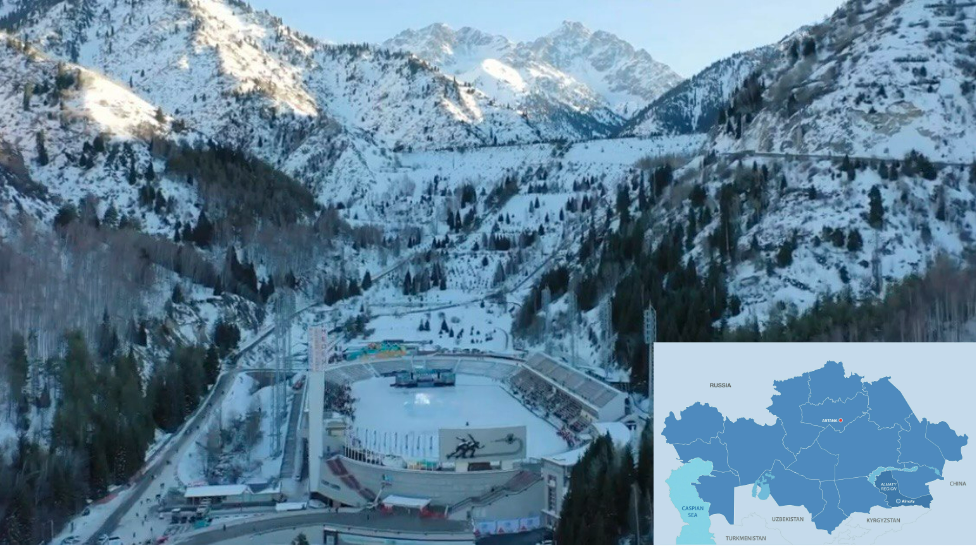 A fragment from the video published on Almaty city’s akimat (city administration) Instagram. Click to see the map in full size

A brief history of the Medeu skating rink

The skating rink, with an area of 10,500 square meters located in the high mountain tract of Medeu at the height of 1,691 meters, was named this way to honor local entrepreneur Medeu Pusurmanov, who initiated the exploitation of a picturesque tract in the foothills of the Trans-Ili Alatau mountains back in the second half of the 19th century.

Medeu became a Mecca for speed skaters in the 1950s. The Soviet national team’s head coach Konstantin Kudryavtsev saw that Kazakh athletes demonstrated better results while performing in Almaty than in Siberia due to “the more slippery ice in their home country.” The Medeu tract was then chosen as the site for a new skating rink.

According to experts, an optimal level of solar radiation, low pressure, gentle wind, and the unique composition of ice obtained from the pure water of Malaya Almatinka River contribute to reaching a high speed of sliding. 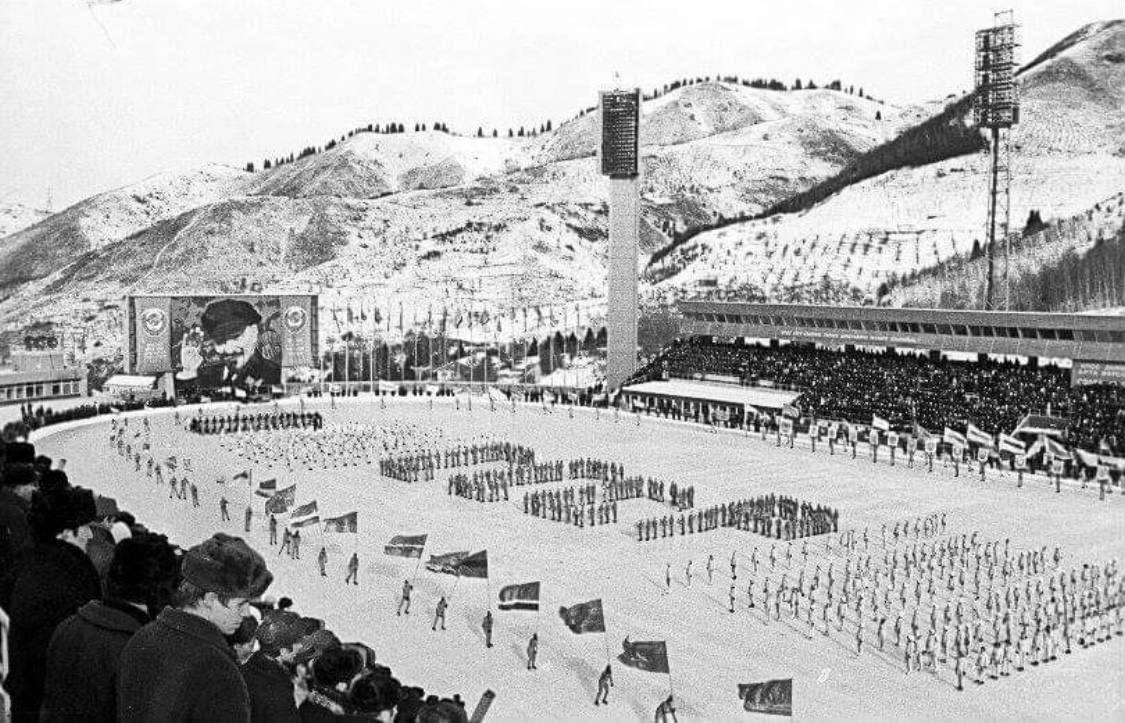 The opening ceremony of Medeu  gathered approximately 10,000 in the stands on Dec. 28. 1972. Photo credit: Virtual museum of Medeu

When the rink was opened on Feb. 5, 1951, athletes set two world and six national records. Overall, 47 world records were beaten for 17 seasons, which allowed Medeu to receive the “forge of records” title.

Medeu was initially a natural ice rink, but the government decided to reshape it into a field with artificial ice. The new rink was opened on Dec. 28, 1972, and allowed to hold competitions in speed skating, ice hockey and figure skating, among other winter sports.

The rink was closed for reconstruction in the second half of the 1980s. The skating rink became more known as the venue for Asia Dauysy (Asia’s Voice) festival, which was held from 1990 to 2004.

Currently, Medeu is a center of mass skating, where Almaty citizens and guests holiday spend their free time from the beginning of October to April. 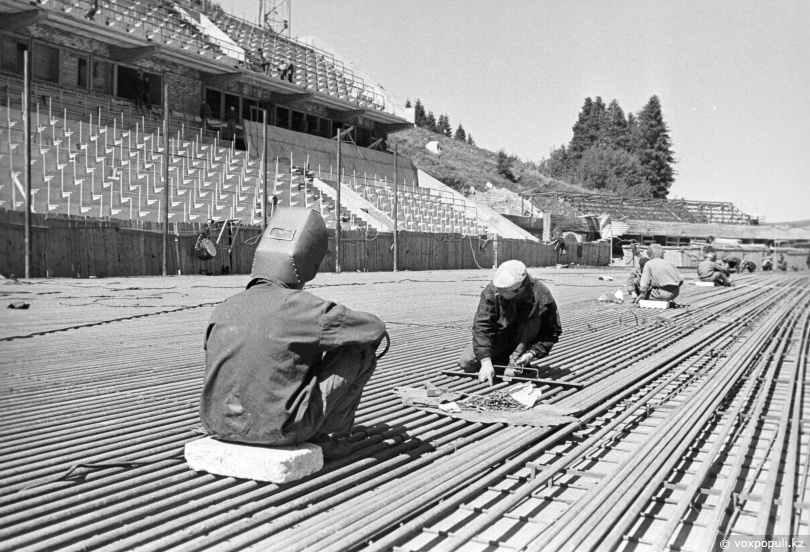 More than 1,300 people participated in the construction of the Medeu skating rink in the 1970s. Photo credit: Central State Archive of Film and Photographic Documents and Sound Recordings

According to the head of Almaty’s sports facilities board Elena Tyo, the ice stadium is expected to host the World Junior Speed Skating Cups in 2023-2024.

Outstanding Kazakh athletes and coaches opened the solemn event with a parade.

“Medeu is the place with legendary history where more than 350 world records have been set over 50 years of its existence,” said city’s deputy akim (mayor) Arman Kyrykbayev during the opening ceremony.

He added that the rink would be reconstructed over the next few years.

“The architectural appearance, which is a part of the country’s cultural heritage, will be preserved, while all life support systems and infrastructure will be completely changed. I think it will be a new stage in the life of our beloved skating rink,” said Kyrykbayev. 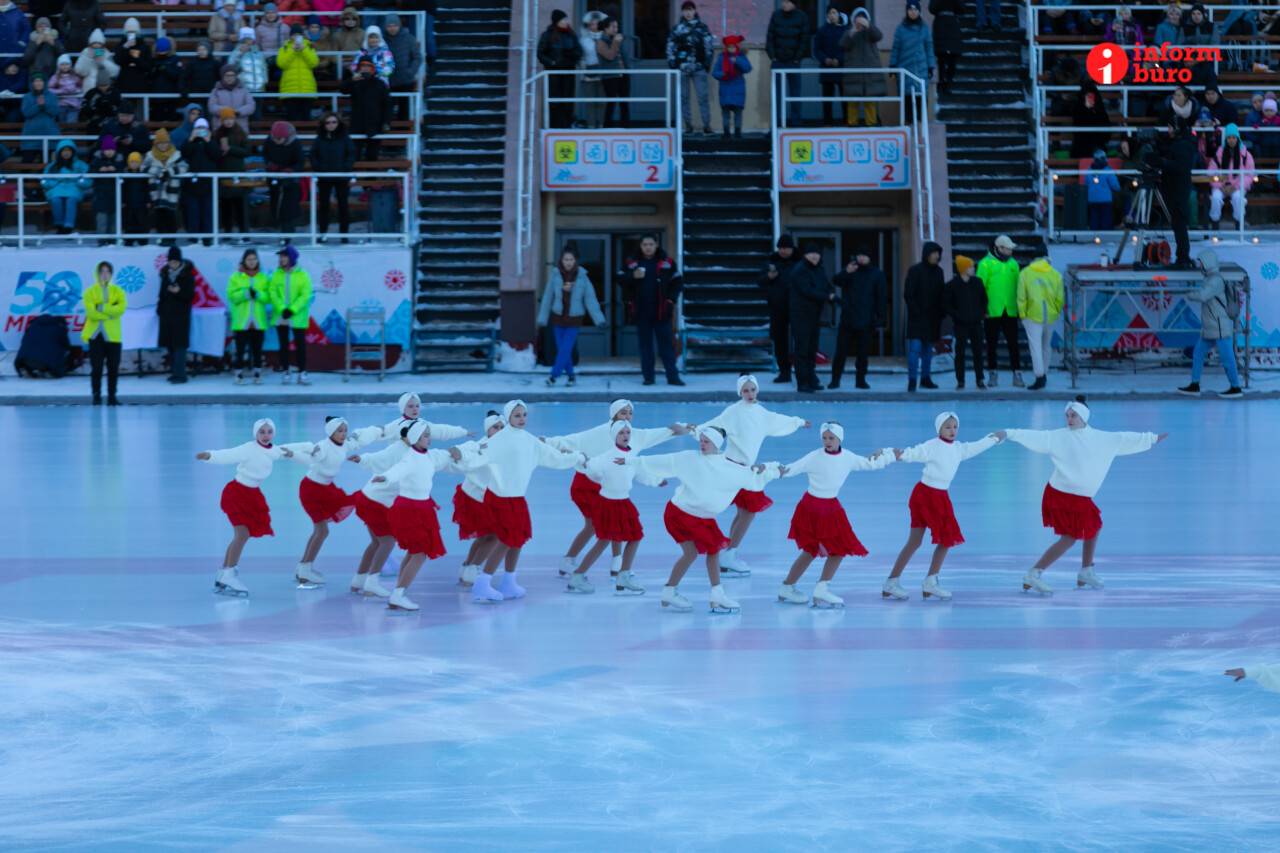 A bronze medalist of the 18th Olympic Winter Games in speed skating Lyudmila Prokasheva attended the event and shared one of the reasons why the rink rose to fame around the globe.

“My American, Canadian and Dutch colleagues still ask me when Medeu will be revived. This is truly the only outdoor high-altitude skating rink in the world with a pipe effect,” Prokasheva said.

Prokasheva explained that the pipe effect in sports implies the wind’s impact on an athlete’s speed of movement. The wind, which emerges after sunset, blows in the back of an athlete and increases his or her speed of movement. This effect does not last long, but if the athlete runs the distance for a while, the result will be much better. 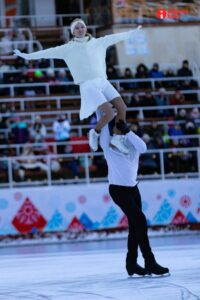 The ice ballet “Ice Symphony” and Ilia Averbukh’s gala show “Heat in the Heart,” as well as the country’s first ice show “Olуmpic Show” were presented to the city’s residents and guests.

A well-known Kazakh musician and songwriter Galymzhan Moldanazar also participated in the event, delighting the audience with his concert.

The video was published on Instagram of Almaty city’s akimat (city administration).