ASTANA – The digital tenge will be launched in three stages until its final implementation in 2025, said Governor of Kazakhstan’s National Bank Galymzhan Pirmatov in his interview with the Egemen Kazakhstan newspaper published on Dec. 29. 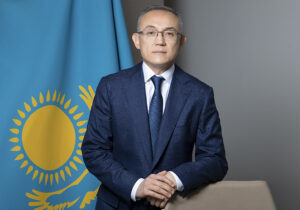 The digital tenge will be used for social payments and public procurement in the first stage. The bank will also test scenarios of cross-border settlements and settlements in digital assets and decentralized finance. The legal and regulatory framework will be prepared as well.

The second stage entails creating mechanisms for settlements in digital tenge without access to the Internet. The third and final stage is introducing the digital tenge into full commercial operation.

Pirmatov also commented on the work of the National Bank throughout 2022.

“To ensure price stability, the National Bank had to tighten its monetary policy. The base rate was raised from 10.25 percent in January to 16.75 percent in December. These actions were aimed at stabilizing inflation processes in the medium term and slowing down inflation expectations in 2023,” the governor said.

He noted that the bank was raising rates on the retail deposits in tenge while the Kazakh government introduced the Tenge Protection Program. This joint effort prevented the decrease of tenge savings accounts, stabilized the funding base of second-tier banks, and reduced dollarization and pressure on the exchange rate.

As a result, dollarization decreased by 4.2 percent, and tenge savings accounts accrued 30 trillion tenge (US$64.8 billion), an all-time high.

Tenge’s exchange rate was of concern for the National Bank due to geopolitical shocks. In March, one dollar cost 500 tenge.

“In such difficult conditions, we have taken prompt measures to ensure the financial system’s  stability. In February and March, foreign exchange interventions totaling $1.3 billion were carried out, while the share of mandatory sales of foreign exchange earnings of the quasi-public sector was increased from 50 to 75 percent. The decree of the President also timely banned the export of foreign currency in cash,” Pirmatov noted.