By Zhanna Shayakhmetova in International on 6 December 2022 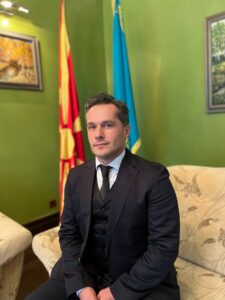 North Macedonia and Kazakhstan have been partners since 1995. The diplomatic relations  between the two countries are based on mutual trust and understanding.

“What contributes to friendly bilateral relations between countries? It is up to developing a trusting political dialogue and building trade, economic, and cultural cooperation. North Macedonia and Kazakhstan are both landlocked countries. Both of them are multinational countries. And both of them have celebrated 30 years of independence. So countries have a lot of things in common,” said Limani.

It should be noted that Minister of Foreign Affairs of North Macedonia Bujar Osmani officially visited Kazakhstan in 2021 and met with Kazakh President Kassym-Jomart Tokayev. Also, Osmani and Kazakh Foreign Minister Mukhtar Tileuberdi signed the Action Plan between their ministries for 2021-2023.

This year saw the first visit of Deputy Prime Minister – Minister of Foreign Affairs of Kazakhstan Tileuberdi to Skopje in November. Kazakhstan and North Macedonia confirmed their mutual interest in strengthening cooperation in the joint statement adopted during the visit.

“Next year, North Macedonia will take the chairmanship of the Organization for Security and Co-operation in Europe (OSCE). We already have great communication with Kazakhstan on this issue. Kazakhstan had the chairmanship in 2010. Therefore, the knowledge for this particular matter will be useful for us, and we will have the share of their knowledge for this subject,” he added.

Mutual trade between countries grew by 88 percent over the first seven months of 2022 compared to the same period in 2021, despite the pandemic.

“Minister of National Economy Alibek Kuantyrov and Minister of Economy of North Macedonia Kreshnik Bekteshi had a determined and fruitful meeting. Last year, Kazakhstan’s National Chamber of entrepreneurs Atameken signed memorandums on cooperation with the Macedonian chamber of commerce, the Economic Chamber of North Macedonia, the Economic Chamber of North-West Macedonia, and The chamber of commerce for information and communication technologies-MASIT. We had a successful B2B forum in Almaty on Sept. 5-6. We brought more than 20 companies from North Macedonia, and they met a lot of colleagues from Kazakhstan. We expect they will develop their interest and close deals for joint ventures and for producing or distributing their products in both ways,” said Limani.

It is expected that Skopje will host the business forum in 2023.

“We are also glad that Kazakhstan will open its embassy in North Macedonia in Skopje next year. This brings us to a better position and faster way of communication. Taking this opportunity, I invite the people of Kazakhstan to visit North Macedonia. It is a small country but a beautiful one. I am sure people will enjoy visiting North Macedonia,” said Limani.

The Ambassador also congratulated the Kazakh nation on the recent Presidential elections.

“I congratulate the newly re-elected President, whom I respect because of his knowledge and courage to build up a new Kazakhstan. I hope and wish the nation will achieve prosperity with the new plans for the economy, relations with the world and develop the same possibilities,” he said.